The defense group of the Buffalo Sabres is a young unit with a lot of potential upside.  The average age of the blue line for my projected opening night roster is 25.4 years old, which is without a doubt one of the youngest defense cores in the league.  Buffalo has their cornerstone defender in a 20-year-old former 1st round pick and have started to build around him with a mix of youth and veteran leadership.

General Manager Tim Murray realized he was bringing up a young defense unit and began to install the leadership group for the back-end last season.  His first move was brining in Josh Gorges from Montreal.  The Sabres immediately sewed an “A” onto Gorges sweater and he ran with the opportunity.  Along with Gionta, Gorges started to drill into the locker room that a losing attitude wouldn’t be tolerated.  His play on the ice wasn’t what the Sabres expected, but he played most the season with an injury that would eventually cause the 30-year-old to miss 36 games.  The Sabres won’t expect Gorges to play the same role he did last season in playing top pair minutes.  He’ll be able to slide into a role that fits his skill set better and allow him to be a solid player for the club next season and beyond.

To go along with Gorges, players like Mike Weber and newly acquired Carlo Colaiacovo will bring experience to the Sabres defense.  Weber is a heart and soul player who gives it all he has every night and leads by example on the ice.  He’s a solid 5th-6th blue liner, but struggles at times in any role beyond that capacity.

Colaiacovo may be the 6th-7th defenseman this upcoming season, but his experience of the game will be a great help to the younger players on the roster.

The last veteran I want to touch on may be one of the most important pieces on the blue line and perhaps the future leader of the defense.  That player is 25-year-old Zach Bogosian. The former top pick of the Atlanta Thrashers, was traded to Buffalo last season as part of the Evander Kane trade.  Bogosian stepped right into the Sabres lineup and showed why he’s such a tough guy to play against.  He brings the physical play every night and can also provide some offense from the back-end.  He may be young, but with 7 NHL seasons under his belt now, Bogosian is a seasoned vet.  He’ll play top pair minutes next season and will likely be paired with the Sabres cornerstone defender.

Buffalo flipped their depth slightly over the past year and a half.  The blue line was once the most promising parts of the Sabres future.  After trading Tyler Myers and Nikita Zadorov, along with the additions to the forward group, the depth has faded away.  However, the talent is still there at the top in Rasmus Ristolainen, Mark Pysyk, and Jake McCabe.

Ristolainen is the cornerstone player on defense that they plan to build around.  At only 20-years-old, Risto has shown he can be an elite player at the NHL level.  He worked his way up to earning top pair minutes by the end of last season and didn’t look out-of-place.  The former 8th overall pick is great in his own zone, excels at starting the rush up the ice, and to top it all off can provide offense from the point position.  The Finnish native is a great skater which allows him to rebound quickly and get up in the play on the rush.  Fans have a lot to be excited about in the future of Ristolainen. 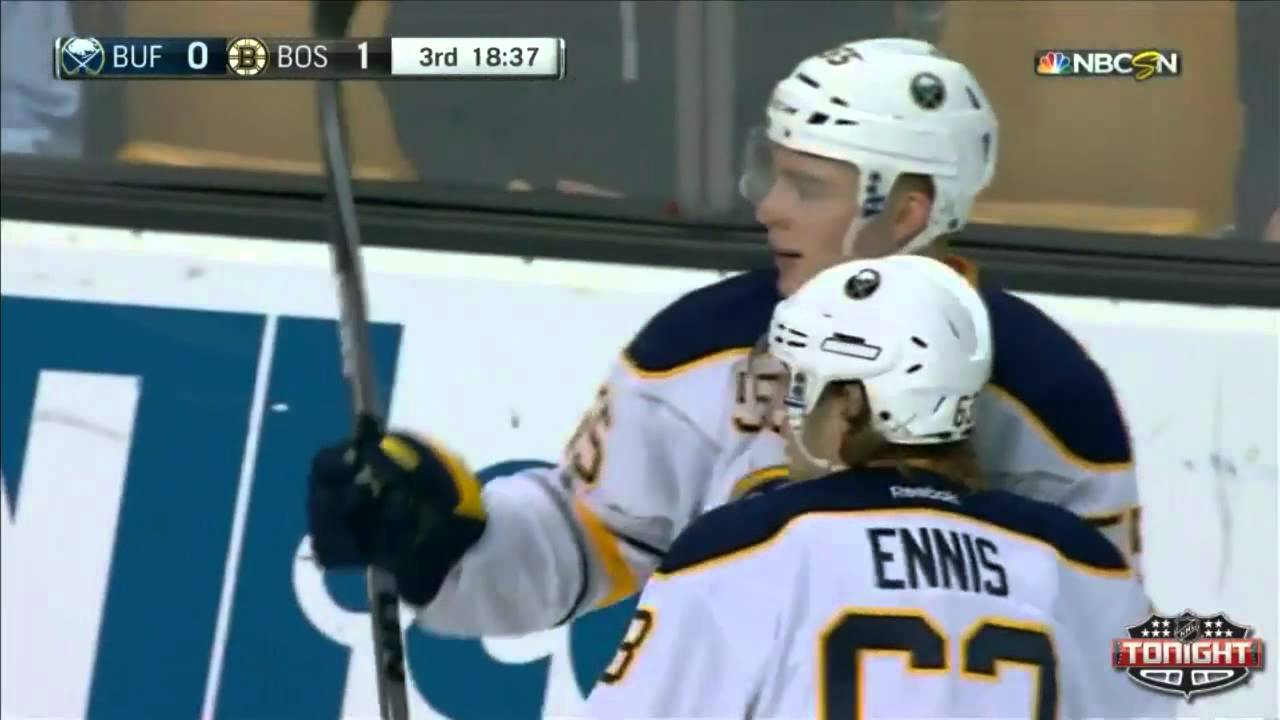 Baring any further additions to the roster I expect the defense group to be rounded out by two promising young players in Mark Pysyk and Jake McCabe.  Pysyk was probably NHL ready last season, but management decided to leave the former 1st round pick in the AHL for another year of seasoning.  He’s definitely shown he fits at the NHL level in the games he’s played with the Sabres.  The belief last season on Pysyk was that he was to good for what they were trying to accomplish.  The 23-year-old isn’t flashy, but he’s great at getting the rush started with that first pass out his own zone.  Pysyk showed at the end of last season his ability to contribute offensively and it’ll be interesting to see if that carriers over to this upcoming season.

McCabe struggled in the first half of his rookie season in the AHL.  He ended the 2012-13 season playing for the Sabres after signing his entry-level contract out of the University of Wisconsin.  The 21-year-old was disappointed when he didn’t make the team out of training camp and took some time to get over it in Rochester.  Once he accepted his situation and went back to playing his game, McCabe began to show what Sabres scouts were so excited about with the former 2nd round pick.  In prospect development camp a few weeks ago, McCabe was one of the best players on the ice.  That was a strong start for him in his effort to make an impression on the new coaching staff.  With a strong training camp, McCabe should be able to earn a roster spot and not as the nightly healthy scratch 7th defenseman.

The Buffalo defense group is a good mix of youth and veteran talent.  The young talent is what makes the blue line so interesting, but it’s veteran presence in the lineup that rounds out the group.  I give the overall position for the Sabres a ‘B’, with the potential to move up to a ‘B+’ if the group can progress as expected.  This defense will be much stronger than what the Sabres put on the ice last year.