The Buffalo Sabres’ prospect pipeline seems dry if you consider who they have down in the American Hockey League with the Rochester Americans. Player development has slowed to a concerning crawl, but not all news out of the minors has been bad.

One of those few bright spots in Rochester has been forward Justin Bailey. 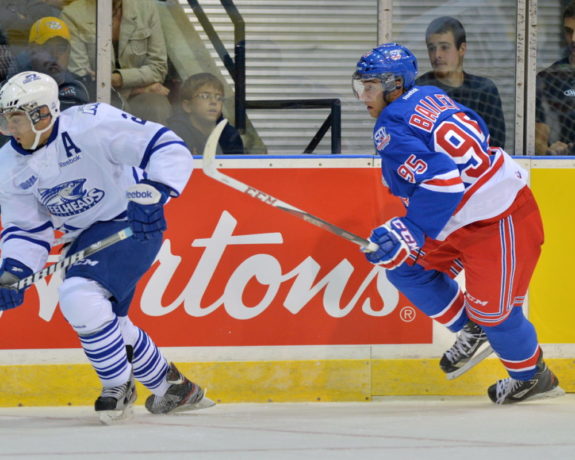 Bailey, 21, was drafted 52nd overall in the 2013 NHL Entry Draft and has put in two full professional seasons in the AHL with some impressive results. He scored 43 goals in the last two seasons combined, pushing ahead of the pack with fellow prospect Nicolas Baptiste.

At 6′ 3” and 214-pounds, he has the perfect size to be a powerful force in the NHL. There is only one thing holding him back from staying in the NHL – consistency.

Getting the First Call

Bailey’s first taste of the NHL came on February 11, 2016, against the Philadelphia Flyers.

In his first stint, he didn’t score or record any points but his play gave fans and management hope that maybe his game was ready for the next level. He showed up at training camp the following season with hopes still sky high. Most people in Buffalo had him on their opening night roster before camp began.

As soon as camp opened, however, disappointment crept in and the consistency question kept coming up. Bailey hadn’t fallen far but it was disappointing when he was part of the first set of training camp cuts.

This wasn’t the first time we had heard about a consistency issue. In 2013, the New York Times ran a piece on him before the draft, with a telling quote from McKeen’s Hockey director of scouting David Burstyn:

Injuries led him back in the NHL in early November for a two-game stint and a seven-game stint from the end of December into early January.

Bailey scored his first NHL goal against the New York Rangers at Madison Square Garden on January 3, 2017, during that seven-game stint. The more he played, the more his play suited the club. However, something was still missing.

He knew on his return to Rochester that consistency was a big factor in why he was demoted to the AHL.

Anytime you go up there you wanna do as much as you can to stay and I thought I definitely brought that, as much as I could. I think there were a couple times where I probably should have scored or should have executed a little better but like I said I played with speed, I played my game and guys come back from injury and I think that’s just how it is.

That same morning, Amerks coach Dan Lambert spoke with assembled media and added some fuel to the consistency fire:

When all was said and done at the end of the season, Bailey ended up playing 40 games in the NHL but only amassed four points (two goals, two assists). In those games, he had separate pointless droughts of eight and 12 games.

He has the speed, size and ability to be a long-term professional in the NHL. Until he puts the chattering to bed, we will continue to wonder if he can put it all together and be a part of the solution in Buffalo.