BUFFALO, N.Y. — The Buffalo Sabres are on such a roll, captain Jack Eichel was having difficulty recalling the last time they lost.

“Um, was it Calgary?” Eichel said Monday, before being reminded the 2-1 overtime defeat to the Flames was three losses ago.

Nine games — and nine wins — later, the Sabres are the NHL’s biggest surprise two months into the season.

A year after going 25-45-12 and becoming the league’s first team to finish 31st following the addition of the expansion Vegas Golden Knights, the surging Sabres (16-6-2) have 34 points and sit one back of league-leading Tampa Bay and Nashville.

“Just to think of where we came from a year ago, and to be winning games and doing this, obviously it’s great,” Eichel said.

Even Phil Housley could crack a smile when asked to reflect on the troubles he and his underachieving team endured last season, his first as coach.

“I try to tend to forget last year,” Housley said.

The Sabres were so bad a year ago, they didn’t register their 16th victory until Feb. 10, and won consecutive games four times, including a season-best 3-0 run in late January.

Buffalo’s nine-game streak is the NHL’s longest since Columbus won 10 straight in March, and it’s one short of matching the Sabres’ franchise record set twice and most recently when they opened the 2006-07 on a 10-0 run. The Sabres would match that if they beat San Jose on Tuesday night. 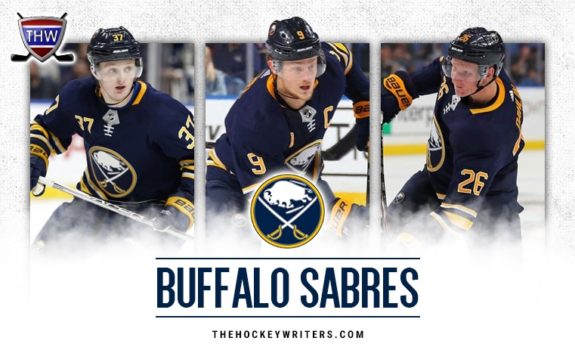 “Extremely proud of this team,” Sabres co-owner Kim Pegula wrote in a text to The Associated Press.

“Everyone is contributing in multiple ways, and when that happens anything is possible,” she added. “There’s still plenty of hockey left to play, but we are encouraged by the foundation that is being built and look forward to seeing the development continue.”

Buffalo’s turnaround is the result of a series of moves and soul-searching sessions that took place over the summer in a bid to spur a team that was the worst in the league in three of the past five seasons.

It began with Housley, who took action at the end of last season after center Ryan O’Reilly went public in saying a losing mentality had crept into the locker room. Housley challenged his leadership group with a summer-long series of frank discussions that allowed players to air their differences and raise concerns.

“I’ve said it once and I’ll say it again, I think the guys made a huge commitment in the summer. We talked about change,” Housley said. “It started with our leadership group leading in the right way.”

Forward Kyle Okposo credited everyone for buying in.

“It’s pretty powerful what you can do if you get everybody on the same page, and people are willing to admit what they have to do to be better and then actually do it,” Okposo said. “It feels like a team. It’s pretty amazing.”

General manager Jason Botterill followed by overhauling the lineup through a series of trades that included sending O’Reilly to St. Louis. He also acquired Conor Sheary from Pittsburgh and Jeff Skinner from Carolina, and upgraded his goaltending by signing Carter Hutton in free agency.

Skinner’s 18 goals rank second in the league, while Hutton is third with 11 wins.

And then came the addition of rookie No. 1 draft pick Rasmus Dahlin, whose effortless skating and deft playmaking ability have energized what had been a plodding group of defensemen.

Dahlin’s two goals and 13 points are tied for second among NHL rookies. And he’s part of a defensive group that has already contributed 12 goals after managing just 19 last season.

The 18-year-old shrugs off the Sabres’ hot start.

“Of course it’s awesome to lead the league, but for me, I like to win, and I’m pretty used to it,” Dahlin said. “I’m so happy that everyone is so glad in the locker room.”

One major change has been the Sabres’ performance in close games. Buffalo has a league-best 9-0-2 record in games decided by one goal, a year after going 11-11-12. The Sabres are also 9-6-1 when tied or trailing after two periods, a year after going 9-44-7.

During their nine-game run, the Sabres won after trailing six times, including overcoming a 4-1 deficit in a 5-4 overtime win at Pittsburgh on Nov. 19. And the game-winning goals have been scored by nine different players.

Forward Jason Pominville, in his second stint with Buffalo, is the lone holdover from the 2006-07 team that won 10 in a row. He’s suddenly feeling rejuvenated.

“How can you not? It’s been a lot of fun,” said Pominville, who can recall the Sabres playing to loud, sold-out home crowds, as opposed to a sometimes half-empty building last year.

The next step for Buffalo: ending its franchise-worst seven-year playoff drought.

“It’s nice for the guys that have been here for a while to finally see what this city is all about when you win,” Pominville said. “Hopefully, they can get a chance to see the next level of this.”