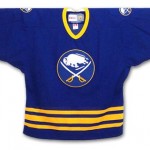 We’re off to a bright start in Western New York; the Sabres store had massive sales (as in revenue…and discounts, though I still can’t afford a new jersey), with over 50 000 pieces of merchandise sold in one week. That’s more income than 2010-2011. Yeah, the entire season.

.500% for the season means nothing in the first week, however there were some visible pluses (and minuses) from opening seven days. Let’s take a look.

Thanks for all the great tweets, I sure had a lot of fun with the boyz in front of that wild crowd! #SabreTime

I know it’s only the first week, and he’s 2-1, but the consistency that Miller is known for has continued through the first week for the Sabres. In the season opener against the Flyers, all he had to do really was let the Buffalo offense pound out against Ilya Bryzgalov. Though against Toronto the next day, Miller was the first star of the game; he had 34 saves and essentially saved the W. Even with the loss to the Canes, Miller had 39 saves–that makes it 100 for the year. He currently sits with a .952 save percentage and 1.67 GAA.

Captain Pominville has 8 points so far, the most of any right winger in the league. Another man on a four-game point streak? Thomas Vanek left the Sabres bench for a while against Carolina at home (gasp!) due to a muscle strain, but all was well when he returned, scoring Buffalo’s only goal that night. He’s now tied for the league lead in points (9) with Joe Thornton. Do I smell an Art Ross?

The 12th overall draft pick from 2012 made the roster at the start of the season, impressing Lindy Ruff and staff. However, in the first four games this week, Mikhail is pointless (in more ways than one), and has only managed a few shots with a -1 rating. This is from a kid who had 85 points in 59 games for the Quebec Ramparts last year. At 18, he still has time to grow, but only one more game to impress GM Darcy Regier, before Regier must decide to either keep Grigorenko on board for the season, or send him down for some maturing.

As stated, Vanek left during the Carolina game Friday night, but did return. Nathan Gerbe returned to the lineup on the 24th, venturing slowly after off-season back surgery. Ville Leino continues to be day-to-day after being placed on the IR with a leg injury; Lindy Ruff says surgery is not required. Scrapper Cody McCormick is waiting on his finger injury. Which I assume he’ll need as our resident tough guy. All these guys should be in the lineup, but we’re doing fine without.

Though added grit to the lineup, we still have trouble battling after forced turnovers. We have the speed, but we also have sloppy passes. “Stop being so fancy, and simplify!” I can see Ruff in the dressing room now. The record of 2-2 may not display it, but with Miller between the posts and hot offense, the Sabres are on their way for a satisfactory season (hopefully).

The boys in blue and gold face Ovi and the Caps on Sunday afternoon.