Leave it to the Calgary Flames to make waves before the 2015 NHL Draft even started.

Defense has been a point of contention of late for the Flames, whose top defensive pairing was seriously hampered by captain Mark Giordano’s season-ending injury in February. Although Deryk Engelland briefly stepped up during the Flames’ playoff run, the team’s only real defensive prospect going forward seemed to be 21-year old Pat Sieloff, who spent most of the 2013-2014 season in Adirondack.

Not a team to rest on their laurels in the off-season, the Flames decided to take this point of contention and turn it around.

In exchange for Hamilton, the Flames gave up their 15th overall pick in the draft, as well as their 45th and 52nd picks. For some, this may seem like a lot, but when you consider what the Flames are getting on their blue line, the trade is well worth it. 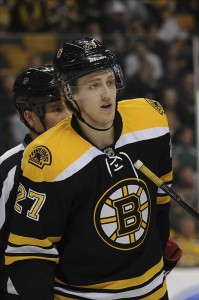 The Toronto native was selected 9th overall in the 2011 NHL Entry Draft by the Boston Bruins. At only 22 years of age, Hamilton has played almost a full four seasons in the NHL, along with some playoff experience. Last season, he was the Bruins’ top possession defenseman, and led all Boston blue-liners with 10 goals and 42 points.

Of course, with all these accolades, Hamilton is not going to be cheap (some sources are suggesting he will be asking for $5.5 million per year). But the Flames have more than enough room to fit him in, as the team didn’t spend anywhere close to their cap last season.

And even if their budget was tight, Hamilton is worth the money to spend. His addition to the Flames’ roster will garner immediate results, a priceless commodity for a rebuilding team.

With added depth to their blue line and a new slew of defensive pairing options for coach Bob Hartley to play with, the Flames have significantly increased their chances of success for the upcoming season.