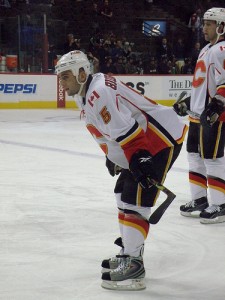 Mark Giordano is one of 11 Flames with a no-trade or no-movement deal. (Steve Victoria/Flickr).

3 points out of 8th spot in the Western Conference
19 games left in the regular season
20.3% chance of making the playoffs (as per SportsClubStats.com)

THE WEEK THAT WAS

MUCH ADO ABOUT NOTHING AT THE DEADLINE

With throngs of local (and national) media sitting in anticipation in the Scotiabank Saddledome, the NHL’s trade deadline came and went with little fanfare. League-wide not a whole lot occurred and the Calgary Flames were no exception, with the team making two minor moves: assigning forward Krys Kolanos to the Abbotsford Heat (in anticipation of David Moss’ impending return) and re-signing rugged winger Tim Jackman to a two-year contract extension.

The lack of moves was what a lot of local media expected. Flames general manager Jay Feaster has to juggle 11 separate no-trade or no-movement contracts (Jarome Iginla, Mike Cammalleri, Alex Tanguay, Matt Stajan, Olli Jokinen, Curtis Glencross, Jay Bouwmeester, Cory Sarich, Mark Giordano, Anton Babchuk and Miikka Kiprusoff), while the majority of the team’s impending free agents are either hurt (Lee Stempniak and David Moss), key role players down the stretch (Tim Jackman, Tom Kostopoulos and Scott Hannan) or guys who have to approve moves (Jokinen and Sarich). Want to add a body for the stretch drive? Too bad, as the signing of Krys Kolanos a couple weeks back put the Flames at their 50-contract limit. Considering that the Flames were three points out of the playoffs at the trade deadline, the notion of blowing up the team or otherwise weakening the club probably wasn’t that appealing.

So given all of these facts, it’s not entirely unexpected that nothing materialized. After the deadline, Jay Feaster noted that there were suitors for Jackman, but none of the offers were enough to convince Calgary to part ways with the winger. That’s not to say that moves won’t happen, but the much hoped-for re-invention of the Flames will have to wait until June’s Entry Draft or the free agent market.

As for this year’s trade deadline, both in Calgary and league-wide, it can probably best be captured by this clip from The Simpsons.

IS THIS A “LAME-DUCK” SEASON? OR AN OPPORTUNITY?

Shortly after he was named the team’s permanent general manager last spring, Jay Feaster made a rather bold declaration. He didn’t foresee himself making a lot of sweeping moves – otherwise known as “blowing up the team” – because he felt that the group that went on a stellar run throughout January, February and March of 2011 deserved the chance to win over a full season.

While many fans either applauded or criticized Feaster for his declaration, it wasn’t like he had much of a choice. Much like at this year’s trade deadline, the Flames roster was chock full of no-move contracts, high price tags and veterans that were brought in to stabilize things. Nevertheless, many took a look at the roster, concluded that the club would finish in roughly the same spot in the standings it had in the past (somewhere between 9th and 12th), and concluded that this was a “lame-duck” season that fans would have to wait out before several old contracts came off the books.

While that may have been true initially, then the injuries happened. Over and over again.

In part because of the laundry list of injuries, what may have otherwise been a “lame-duck” year may have turned out to be a very productive one. In Feaster’s first full season at the helm with his new management group, including Craig Conroy and John Weisbrod, and with Troy Ward at the helm of the AHL’s Abbotsford Heat, the club has had the opportunity to do an awful lot of evaluation.

How are the prospects on the farm? Well, the Flames have used roughly a dozen of them at various times throughout the year. In fact, a couple players likely ear-marked for trips to Abbotsford – Derek Smith and Roman Horak – have spent the majority of the season with the big club. Smith’s performance with Mark Giordano on the shelf likely earned him his recent two-year contract extension.

How is Brent Sutter doing as head coach in the last year of his contract? The team has used more than 30 different players throughout the year, yet the team’s on-ice product (warts and all) has typically been the same regardless of who put on the Flames silks.

If nothing else, this evaluation period has given Feaster and management a bit more information to work off of as they attempt to improve the hockey club going forward. In fact, some of the improvements have have already begun. T.J. Brodie and Lance Bouma have elbowed their way into the team’s future plans, possibly giving the team some confidence to make some moves in the off-season to give them full-time spots next year. The try-outs for Brodie, Smith and Clay Wilson allowed the Flames to trade Brendan Mikkelson to Tampa Bay for Blair Jones, who was a tremendous asset up the middle before he got hurt. The emergence of some of the young forwards allowed the team to trade an aging Brendan Morrison to Chicago for the talented Brian Connelly. Long-time top goaltending prospect Leland Irving was able to impress at the NHL level, which will likely influence further moves by the club.

So far, Feaster has been a man of his word. He’s stuck with the group that went on the miracle run last winter, although he’s improved it a bit with trades. If this group fails, he’ll be able to go forward with a much better understanding of the strengths and limitations of what they have (and arguably more than his predecessor had).

The Calgary Flames are obviously a team with a few warts. The core is primarily 30 year olds. There are a bunch of contracts that are not fantastic for what the players’ roles are (see: Matt Stajan and Anton Babchuk). Outside of Jarome Iginla and Miikka Kiprusoff, there is not a ton of top-level talent on the club. These are issues that need to be addressed. But the 2011-12 season could be a tremendously valuable evaluation tool for informing solutions to these problems.

If they make the playoffs, that’s a bonus. But if they do not, it’s not like the entire season was a waste of time.

DISPATCHES FROM THE FARM