Your Montreal Canadiens or IceCaps?

With Sven Andrighetto, Daniel Carr, Charles Hudon, Christian Thomas and Dustin Tokarski all on the roster, that makes five total players with the Canadiens who started the season in the American Hockey League, each of whom having played at least one NHL game this season, following the latest loss, to the Detroit Red Wings.

Add in Bud Holloway, who is now back with the St. John’s IceCaps, into the group of necessary call-ups due to the Habs’ current injury situation as well. Goalie Zachary Fucale was also called up to back up starter-by-default Mike Condon, but didn’t get in a game.

You might as well include Jarred Tinordi onto a more general list of AHLers currently with the Canadiens and perhaps Greg Pateryn, depending on how forgiving you are following his game-costing mistake in Thursday’s third period, as, after all, it was one that in theory can be attributed to a lack of experience. 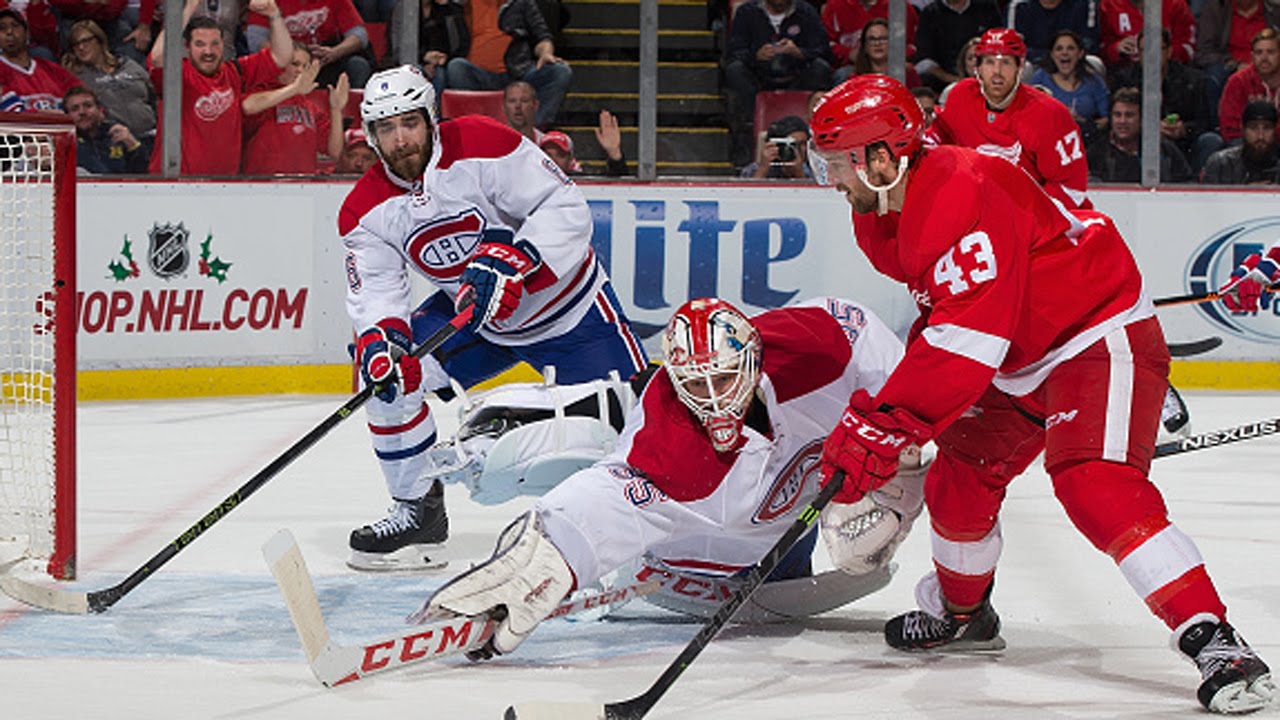 That’s in part the point.

The Good Thing About Injuries

Injuries should never be used as an excuse, especially not when the Canadiens don’t even find themselves in the top 15 in terms of man-games lost… not when the Atlantic Division’s second-place Red Wings, who are now just four points back with one game in hand on the Habs, are third. A week ago they were nine points back.

Sure, Montreal has injuries to key players like Hart Memorial Trophy-winner Carey Price and top-line right-winger Brendan Gallagher. However, Pavel Datsyuk was out for 15 games and you can argue Detroit doesn’t have the benefit of the caliber of goaltending Price provides to start with (even though Petr Mrazek and Jimmy Howard each have save percentages above .920).

So, Montreal will just have to find a way to deal, and in a way this tough stretch, injury-wise, is good for them. Maybe not from the perspective of the ever-accumulating losses. Those aren’t fun, especially when you’ve had the lead in the third period in two straight games, each of which turned into a regulation loss.

Among the League’s Elite?

Generally speaking, teams of Montreal’s caliber should be able to close out games when leading in the third period. Dating back to the back half of the home and home against the New Jersey Devils, they’ve blown three third-period leads in the last six games. In their other two losses during that stretch, to the Washington Capitals and Carolina Hurricanes, they were tied at one point in the final frame, but still unable to finish.

However, these are learning experiences, and, more than that, they’re learning experiences for the team’s younger players who wouldn’t otherwise be getting ice time. Granted, maybe now’s not the best time to turn to Tinordi for the first time all year. It’s not like he’s the type of player who can provide a spark once inserted in the lineup—he’s more the type to not be noticed, in spite of being 6’6”, if he’s doing his job well. Now he’s not being seen at all.

For years—albeit seasons in which head coach Michel Therrien was able to successfully guide this team to the 100-point plateau—young players were turned to as an absolutely last resort. Now, you’d be hard-pressed to watch a Habs shift without wondering who that one player is, because you absolutely swear to yourself you’ve never seen them before. You probably haven’t.

So, even though Therrien should justifiably be generating some Jack Adams buzz right about now, he’s far from the perfect coach due to his inability to trust his young players until it’s the playoffs, it’s too late and they can’t be trusted.

As such, as Habs fans, consider yourselves lucky, as strange as it sounds, that Pateryn is getting the ice time now… and hope to death he gets back in next game. Because, at least with his confidence intact, he can prove to be an invaluable asset down the line. Because, if he doesn’t, it means, in spite of the players being the ones needing the tutelage, Therrien is the one who still hasn’t learned a thing.

It Could Go Either Way

The encouraging thing is the Habs aren’t playing badly overall, which is a testament to their organizational depth.

That statement conveniently excludes the lost leads and costly brain farts over the last few games, but Montreal has outshot their opponents in four of their recent five losses. The Habs’ shooting percentage is 10.3 percent on the season, but since beating the New York Rangers 5-1, in the seven games since, it’s 6.0. Either that’s just a clinical inability to score or Montreal’s just not getting the bounces right now.

In essence, these are all games that could have gone the other way. Come the playoffs—in spite of it all, Montreal is still in first place in the Eastern Conference—games like these last ones very well may. There’s still a lot to look forward to, in other words.

These past few games don’t have to define the season, which is (very) far from lost at this point. There’s still a lot of positive to be taken away from them that can be built on, though.