Wilson scored his seventh goal in nine games since coming back from a lengthy suspension, extending his career-best goal streak to five games and point streak to seven. The short-handed goal gives Wilson 13 points, but a hit on New Jersey’s Brett Seney late in the second period put him back in the spotlight for the wrong reason.

After Seney released the puck and it had gone into the corner late in the second period, Wilson skated up from behind and hit him with his left shoulder. Wilson was assessed a match penalty for an illegal check to the head, which carries with it an automatic suspension that the NHL must review before deciding to rescind it.

Wilson, who was given a 20-game suspension that was reduced to 14 for an illegal check to the head in the preseason finale, could avoid being suspended this time. After review, he did not make principal contact to Seney’s head, it did not look like a predatory play and the Devils forward returned at the start of the third.

Backstrom had a hat trick for the first time since Dec. 13, 2014, and added an assist for a four-point game. Andre Burakovsky also scored for Washington, which got 33 saves from Braden Holtby, including two on breakaways by Seney and another on former Capitals forward Marcus Johansson. 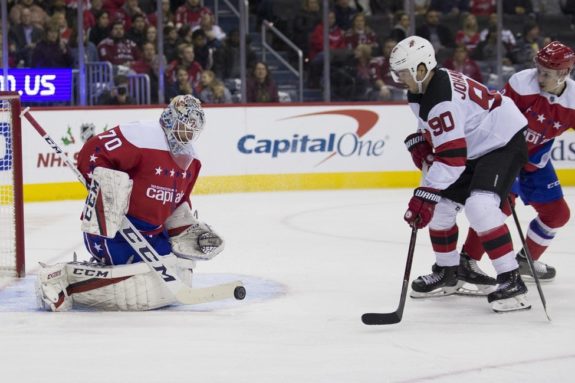 After the Devils got within one goal in the final two minutes, Alex Ovechkin scored an empty-netter, his 626th goal that put him into sole possession of 15th on the NHL’s all-time list, and Backstrom completed the hat trick with his own empty-netter.

Travis Zajac, Nico Hischier and Johansson scored and Keith Kinkaid allowed four goals on 29 shots for the Devils, who have lost four in a row and six of seven.

NOTES: According to the NHL, linesmen Brandon and Travis Gawryletz are the third known set of brothers to work the same game after Paul and Greg Devorski from 1993-2005 and Ernie and Sibby Mundey from 1946-49. The Gawryletz brothers officiated one previous game together on Jan. 20. … Capitals C Evgeny Kuznetsov returned after missing the past six games with a suspected concussion. … RW T.J. Oshie missed his seventh consecutive game with a suspected concussion. … New Jersey C Michael McLeod, a 2016 first-round pick, made his NHL debut after being called up Thursday. D Mirco Mueller returned to the lineup for the Devils, replacing Egor Yakovlev.

Devils: Return home to host the Winnipeg Jets on Saturday.

Capitals: Look to extend their winning streak to eight against the Anaheim Ducks on Sunday.