Throughout their history in Raleigh, the Carolina Hurricanes have had their share of ups and downs.  They’ve won one Stanley Cup Final, reached another, and made the Eastern Conference Finals while also having finished with a bottom-ten draft pick six times.

What hasn’t wavered, however, has been their participation in the Olympic Games.  Since NHLers have been allowed to participate beginning in 1998, the number of Hurricanes’ representatives has only increased.

In 1998, Keith Primeau and Sami Kapanen were the lone selections from Carolina.  16 years later, the list has swelled to eight camp invitees with many being near-locks to make the squad.

Though he has yet to play a single game in a Hurricanes’ sweater, Andrej Sekara looks to be well on his way to representing his country in Sochi.  While there aren’t many Slovakian defensemen in the NHL, Sekara is one of the better ones.  And despite being only 27, he already has Olympic experience having played in Vancouver in 2010 as a 24-year-old.

With quite a bit of other international appearances under his belt, there’s no reason to believe that Sekara will be left off the roster this go-around. 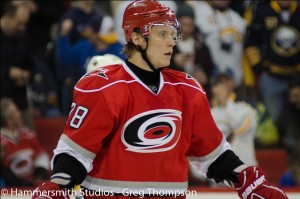 Alexander Semin has quickly become one of the most beloved members of the Hurricanes, both inside the locker room and out.  2012 saw a rejuvenation of sorts, leading to a point-per-game performance.  And he comes with plenty of international experience, including a gold medal victory in the 2012 World Championships.  Unfortunately, he was also a member of the 2010 Olympic team that finished in 6th place.

Russia is going to need his firepower if they want to avoid another disappointing year, this time in front of their own fans.

Although the Czechs have yet to announce their preliminary roster, Jiri Tlusty figures to be a good bet to at least merit a camp invite after his unexpected breakout year which saw him finish tied for fifth in the NHL in goals scored.

Tlusty has found a home beside Eric Staal and Semin on the Canes’ top line, proving to be a smart, defensively-responsible contributor, rather than just a passenger.  During the lockout, he played on a line with Jaromir Jagr and Tomas Plekanec for Kladno, so he has plenty of experience being put into a scoring role and excelling, even if his international play has been limited.

Barring a complete disappearance in the season’s first half, Tlusty’s addition to the Czech team might be needed to ensure their alternating medal/non-medal years stays intact.

Perhaps the most intriguing of Carolina’s representatives, Justin Faulk has entrenched himself in the team’s top-four and has displayed tantalizing potential, improving every year.

Faulk’s competition on the American blueline will be fierce. Between potential captain Jack Johnson, Ryan Suter, Ryan McDonagh, Zach Bogosian, Kevin Shattenkirk, Cam Fowler, and John Carlson, youth appears to be the theme.  Faulk will have his work cut out for him, and any slip or injury early the early season could spell the end of his chances.

If prior experience is a plus for Team USA, Faulk is already well-decorated as a 21-year-old.  In his two World Championship appearances, he’s racked up 14 points in 18 games and won a bronze medal in 2013.

Faulk said he has gotten positive feedback for his play for Team USA in past two World Championships. Has done well on the bigger rinks.

Last games’ bronze medalists seem all but certain to return both Tuomo Ruutu and Joni Pitkanen to next year’s team. While it can be argued that both players have become walking infirmaries, when healthy, they represent formidable additions to Team Finland.

Ruutu may not be the scorer he once was, but his physicality on the ice is no less of a threat.  Though he only played in 17 games, he still threw 51 hits–nearly 3 per game.  Ruutu also brings a wealth of international experience and success.  He’s won 10 medals in his career; one gold, three silver and six bronze.

Team Finland has their sights set even higher this year.

Both Eric and Jordan Staal, along with their brother Marc, were invited to Team Canada’s training camp, and while it would be a nice story to watch three of the Staal brothers compete for an olympic medal together, the reality is that it is unlikely to happen.

At times in 2010 Eric played alongside Sidney Crosby and Rick Nash on Canada’s first line, and could find himself in a familiar spot this year after having a rebound year of sorts next to Semin and Tlusty.  That year Eric became the 23rd member of the Triple Gold club, joining names like Joe Sakic and Igor Larionov.

Jordan, on the other hand, is a very good player, but one whose job can better be done by a player like Jonathan Toews.  Jordan has never scored more than 50 points in any NHL season and his checking role left a bit to be desired in 2012.  Any other team and he’d have as good of a shot as any, but Team Canada’s roster may not have room for him in Sochi.

Though they were not even invited to the summer camp, both Jeff Skinner and Cam Ward were once considered to make the team before injuries and slumps took their toll.  With a dearth of goaltending this year, Ward may have the opportunity to sneak in with a strong start, but Skinner’s chances appear to be remote.  The corps of forwards are just too strong and too numerous to fight through.

For a team that just finished fifth-worst in the NHL, landing eight representatives in olympic orientation camps is no small feat.  The talent is certainly there for the Canes to have a strong season, but will sending such a large portion of their team overseas during the two week break impact the second half of their season?  It didn’t in 2006, but 2014 might be a different story.

The NHL regular season schedule was released on Friday. Check out our partners at TiqIQ for the best deals on Carolina Hurricanes tickets for all 2013-14 games.