The Columbus Blue Jackets got their first chance this season to play the Washington Capitals Friday night. This was their first game since the Capitals came back from a 2-0 hole in their playoff series before going on to win the Stanley Cup. While that series still leaves a sour taste in the mouths of the Blue Jackets, Friday was an opportunity to start a multi-game winning streak while potentially taking first place in the Metropolitan Division.

Thanks to one of the newest Blue Jackets, they did just that.

Anthony Duclair scored on a power play 5:09 into the third period the eventual game winning goal in the Blue Jackets’ 2-1 win over the Capitals. Sergei Bobrovsky was outstanding stopping 33/34 shots. Overall especially after the first period, the Blue Jackets played a solid game.

The takeaway from this game for me outside Bobrovsky was Duclair. His goal was his 7th of the season which is tied for the team lead with Josh Anderson. That’s not bad for someone brought on board with a league minimum contract.

Duclair Showing Well On the Ice

We know the story. The Blue Jackets are the fourth team for Duclair already in his young career. Despite enjoying one good season in Arizona, finding consistency otherwise has been a struggle. He knew that at just age 22, time and potentially opportunities would start to run out.

The Blue Jackets presented Duclair with an NHL deal at $650,000. The story would be how would he respond knowing the rest of his career is at stake. With 20% of the season gone, the early returns look super promising.

Besides being tied for the team goals lead, Duclair is showing why so many had high hopes for him in season’s past. His skill is evident. Every time he has the puck in open ice, he’s a threat to score. Even if several defenders are around him, he can create. This goal against the Flyers was filthy. 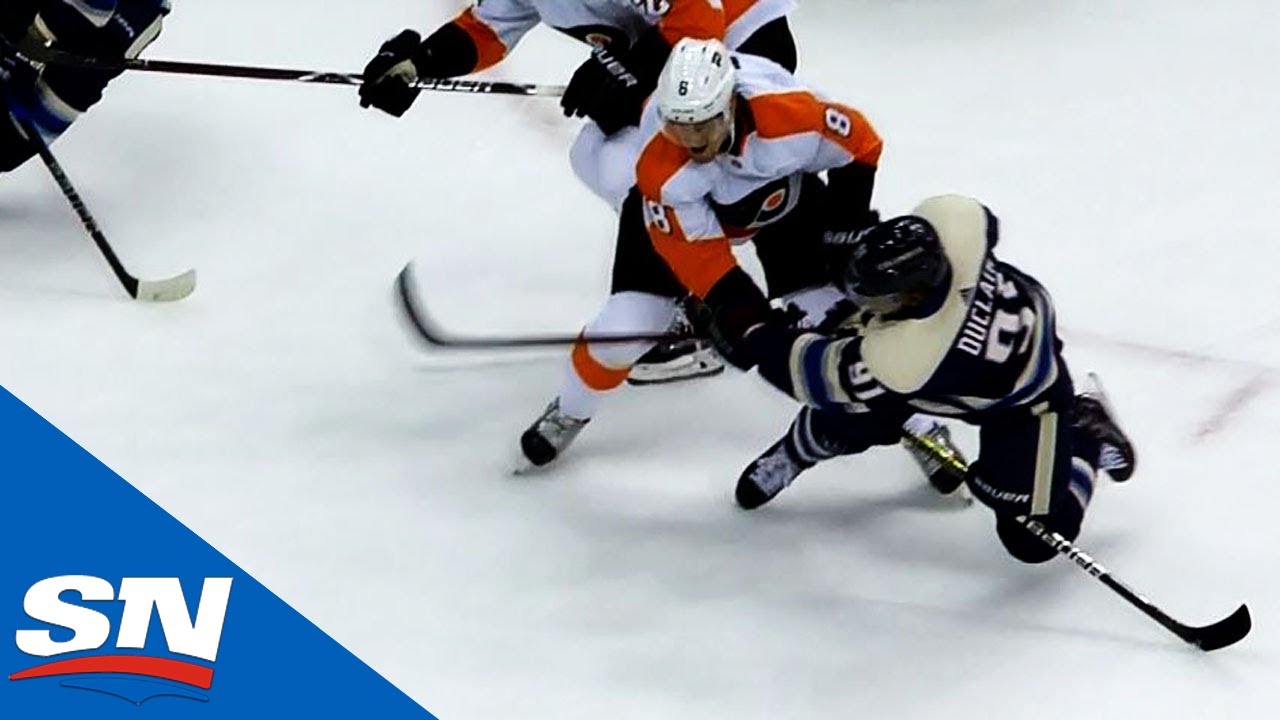 This goal happened when the score was 1-0 Flyers. Duclair has shown an early knack for scoring at key times. Against Dallas, Duclair opened the scoring. He scored the Blue Jackets’ opening goal in San Jose helping the team back from a 1-0 deficit. With the score 2-1 St. Louis on October 25th, he scored early in the second period to tie the game before Columbus exploded offensively.

When the Blue Jackets have needed a spark or a big play, Duclair has delivered at key times. Given the up and down nature of the season to date, his production is a big reason why the team leads the Metropolitan Division as of this writing.

Good Start in Locker Room Too

Another thing to watch was how would Duclair handle himself in the locker room. The early reviews there have been all positive. Captain Nick Foligno admitted in my recent Catching Up With the Captain interview that he has been impressed with the way Duclair has handled himself.

“He’s a great teammate. I’m really impressed with the way he has come in,” Foligno said. “The biggest thing here is that he’s got an opportunity here. I wanted to see him take a hold of it because it speaks a lot to his character. If he was going to come in here and just hem and haw and not grab a hold of a great opportunity, then I would have been disappointed. But he’s done that. He’s come in here and he’s been a great teammate, a great player, a hard worker in the gym and on the ice. The guys instantly respect that. I think that instant chemistry, the way he’s integrated himself in this locker room is helping and we really appreciate having him on the ice.”

Duclair admitted part of the reason he was intrigued by Columbus was being with John Tortorella. That too has gone well.

The thing that is generally misconceived outside of Columbus is how Tortorella handles his players. Some think he doesn’t get along with anyone and is hard to play for. This is true for the players that don’t put the effort in. But look around the league past and present. Many former players of Tortorella have said he was the best coach they’ve ever played for. That’s because Tortorella is honest and straight to the point. Duclair needed someone like Tortorella teaching him at this stage of his career. To date, the results speak for themselves.

With 80% of the season left, it’ll be curious to see how Duclair does moving forward. He has his seven goals on 31 shots for a 22.6% shooting percentage. Four of his seven goals have come on the power play including the game winner in Washington Friday night. One can expect some regression as he is a career 13% shooter. Can he replicate his 20-goal season of 2015-16 or will he play like the last two seasons and play under 60 games?

With so much on the line, Duclair is off to a tremendous start and paying off the Blue Jackets’ gamble thus far. Even if things do fall off the rails, it’s a one-year league minimum deal. This contract was a win when it was signed and is a big win now.

Duclair’s doin’ work in Columbus and has made them a better team.