Advanced statistics have been lauded for their potential for having predictive value. Much as baseball’s shift towards a reliance on on-base percentage – as teams that are full of players that get on base more tend to score more runs and win more games – hockey may be in the midst towards player valuations being based upon puck possession. After all, teams made up of players that possess the puck and put it towards the other team’s net probably score more than other teams, and would win more games because of that.

Corsi Close is one metric that has been commonly used to measure puck possession. Here we take a look at the metric and its effectiveness in translating to a team’s points.

Corsi is a measure of puck possession. It is a tabulation of all shots on goal, blocked shots and missed shots – effectively it’s a measurement of all shots AT the opposition net, regardless of if they hit the net or not. Corsi can be expressed in a raw form for and/or against, or as a percentage, or as a plus/minus aggregation. Teams with higher Corsi are thought to be the better teams in hockey – such as Los Angeles or Chicago – while teams with bad Corsi are thought to be sub-par – such as Florida, Buffalo or Calgary. There are of course some exceptions.

When teams are up by a significant margin, they tend to take their “foot off the gas,” in the sense that they roll four lines more evenly rather than rely on their skill players (and risk them getting injured in a game that’s out of hand) the way they would if a game was close. Similarly, when a team is down by a few goals, they tend to press harder and try to make something happen to make the game closer. These adjustments are known as “score effects.” Because of these score effects, a Corsi number for all situations may not capture what players or teams are the best in terms of puck possession.

As a result, Corsi Close has become utilized more commonly as a measure. As the name suggests, this takes into account Corsi only in situations where the score is “close” – tied or with a one-goal lead by either team. 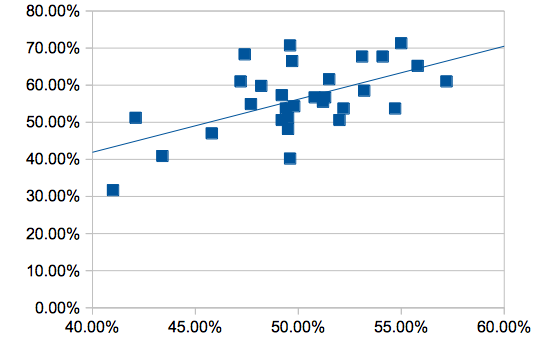 These four clubs performed better than the Corsi Close analysis would have predicted.

These four clubs performed worse than the Corsi Close analysis would have predicted.