If one thing remains constant, it is change.

Since the first major rule changes to the NHL in the early 20th century, the game has evolved and now, general managers are debating whether to implement a change which might profoundly alter the game.

Discussed this week at the NHL general managers’ meeting in Toronto., there is a desire to cut down on those games decided by a shootout.

To that end, one proposal on the table could extend the length of the present overtime and create a significant change from the current overtime/shootout format. In conversation, the NHL GMs may monitor the American Hockey League,  which extended overtime from five-minutes to seven-minutes. The AHL also altered how play is conducted in overtime.

While the extra session begins with a 4-on-4, the number of skaters is reduced to 3-on-3 after the first whistle past three minutes into the overtime. The aim is to have teams decide the game on the merit of play on the ice and not concluded by an individual within a shoot out environment.

The reaction of Arizona coach Dave Tippett may be typical of coaches around the NHL.

“I would like to see about six, seven games and see how it goes,” Tippett said after practice Wednesday. “For me, I like to see a game end with a resolution. While the shootout may be a good fit for the fans, I think most of us want the players in a game-situation to decide the outcome.”

While the GMs may be talking about this change, Tippett indicated that due diligence is required.

“If you’re going to implement something like this, you need to get it right,” he added. “I’ve sit in on meeting with league officials and I’m really impressed how complete they are when discussing topics and items. They want to get it right.”

If the league decides on changing the overtime format, players will likely not be severe critics. A consensus in the Coyotes’ locker room after practice Wednesday indicated that once a rule is implemented, it’s for the betterment of the game. 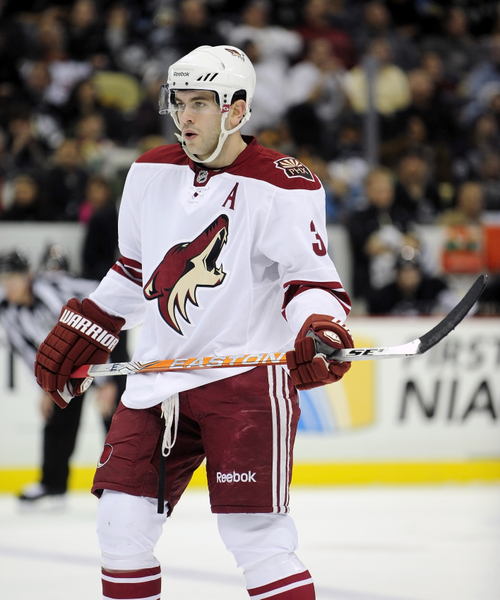 “Anything the NHL does is positive,” said defenseman Keith Yandle. “If these are the rules, then we play by the rules.”

Overall, Yandle said the change in overtime would clearly open up the ice for the more skilled players.

“The 3-on-3 situation will definitely create more scoring chances,” he said. “There would be so much ice and that would favor those with players with a strong offensive game.”

In addition to the revamped overtime format, the GMs are also considering the call of goaltender interference to be placed under video review. To date, that penalty is not subject to review but after collision in last season’s Stanley Cup finals involving the Rangers’ Henrik Lundqvist, the GMs plan to take an in-depth look.

against the top line

While Vermette shadowed Ovechkin most of the night, others stepped forward to limit Ovechkin to three shots on goal and no scoring points. That includes 21 minutes, 5 seconds of ice time, topped only by Nicklas Backstrom (21 minutes, 26 seconds) and  Troy Brouwer (21 minutes, 14 seconds)  among ice time for Washington forwards.

“It’s either Vermette or Martin Hanzal who has that assignment,” Tippett said. “Since Hanzal was out (Tuesday night), it fell to Vermette. Both are every strong two-way players and draw the top opposing player or line.”

Hanzal, who missed Tuesday’s game against the Caps with a lower body injury, made the trip to Dallas Wednesday and the start of a three-game road trip that begins Thursday night. The Coyotes also play in San Jose and Anaheim before returning home next Tuesday night to face Colorado.