Dallas won its third straight to move one point ahead of Minnesota for the first wild card from the Western Conference.

Three of Bishop’s four shutouts this season have been by a 1-0 score. His other shutout was in a 2-0 game. 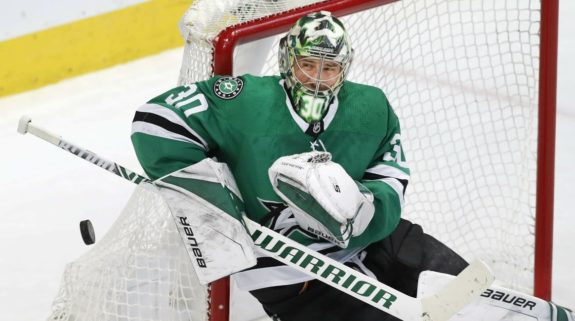 Klingberg provided the offence 1:16 into the second period. He took a cross-ice pass from Miro Heiskanen at the blue line, skated to the top of the right circle and sent a wrist shot into the net off the left goalpost.

Alexandar Georgiev had 31 saves for New York, which hasn’t won in five games.

Both goalies were on their game in a scoreless first period, with 11 saves each.

Georgiev had more difficult chances in the first. He stopped Radek Faksa on a breakaway and gloved Jamie Benn’s shop from the top of the left circle off a faceoff. At 12:30, he saved a shot by Brett Ritchie just outside the blue point.

Bishop’s best was at 17:40 on Vladislav Nemestnikov’s snap shot as he skated down the slot.

The Stars’ first power play followed. It was Tyler Seguin’s turn to send a shot off a goalpost.

In the evenly played second period, Dallas outshot the Rangers 10-9.

New York killed a 5-on-3 power play in the third. With the Rangers still down a man, they nearly scored short-handed on a 2-on-1 break, but Brady Skjei shot wide right.

NOTES: Klingberg has goals in consecutive games for the first time since a three-game streak from Oct. 9-15. He has nine goals, one more than last season’s total. … Dallas coach Jim Montgomery scratched RW Alexander Radulov after he arrived late for the morning skate. Radulov had been benched for part of a period earlier this season. … Rangers C Mika Zibanejad received a 5-minute major for boarding and a game misconduct when he knocked Stars C Radek Faksa from the game midway through the third period. … The Rangers entered the game with equal numbers of wins and losses in all games, against both the Eastern and the Western conferences and against each Western division. Georgiev’s record coming in was 10-10-2.

Rangers: Finish a two-game trip on Thursday at Detroit.

Stars: Play Colorado on Thursday in the second of a three-game homestand.