GLENDALE, Ariz. — Adam Henrique and Troy Terry scored power-play goals in the third period, and the Anaheim Ducks ended Arizona’s NHL-long six-game winning streak with a 3-1 victory over the Coyotes on Tuesday night.

Jakob Silfverberg had a goal and an assist for the Ducks, who had scored only seven goals while losing five of their previous six.

Lawson Crouse scored his career-high 11th goal for the Coyotes, who had won the first four games of a season-long seven-game homestand.

Silfverberg has two goals and four points since signing a five-year, $26.5 million contract extension Saturday that will keep him under contract through 2023-24. He scored his 100th Ducks goal on Sunday.

Henrique tipped Rickard Rakell’s shot from the left circle past Darcy Kuemper for a 2-1 lead four minutes into the third period, and Silfverberg assisted on Terry’s shot from the right circle midway through the period. 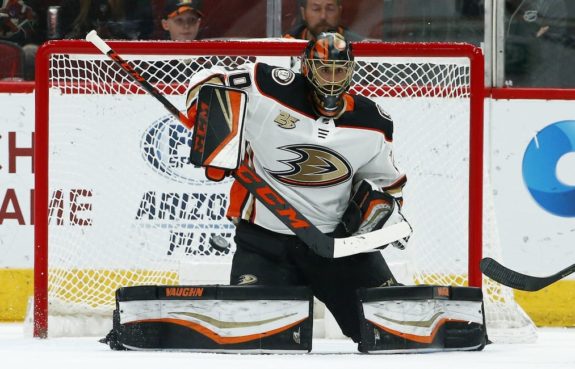 Darcy Kuemper made 28 saves for Arizona while having his seven-game winning streak broken. He had given up only 11 goals in that span.

Silfverberg tipped in Josh Manson’s shot from right point at 3:52 of the first period to put the Ducks ahead. Crouse tied the game on a wrist shot from the right circle at 18:32 after a sloppy line change left the Ducks outnumbered in the Coyotes’ offensive end.

Crouse has three goals and five points in his in his last six games. The Coyotes did not have a shot on goal in the first 12 minutes, getting their first during a 5-on-3 power play on which they did not score.

NOTES: The Coyotes had not won six straight since 2012, the last season they made the playoffs. … Arizona D Jason Demers played for the first time since Nov. 15 after missing 47 games with a lower-body injury. D Jason Oesterle (upper body) was out. … Ducks C Ryan Kesler played his 1,000th NHL game. … Ducks C Ryan Getzlaf played in his second straight game after missing the previous five with an upper-body injury.

Ducks: Open a four-game homestand against St. Louis on Wednesday.

Coyotes: Host Calgary on Thursday. The Flames won the first three games of the four-game season series while outscoring the Coyotes 18-4.