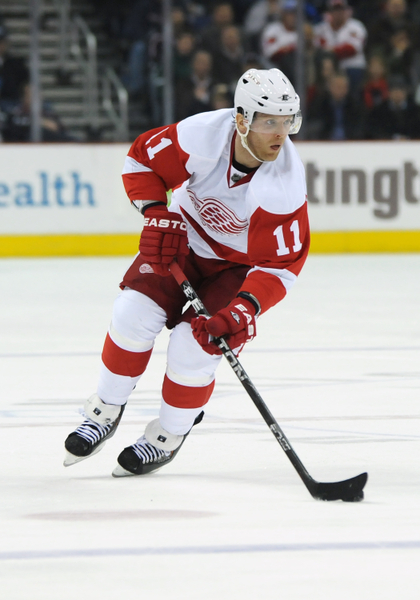 The Philadelphia Flyers are ready to go for this upcoming season.  With the recent news of the team signing long-time Detroit Red Wings forward, Dan Cleary, the Flyers have filled a vacant spot at the 3rd line position.  The deal was announced late last night after rumblings of a possible signing were rumored in the afternoon.  Reported by Helene St. James, Cleary has agreed to a 3-year deal with an average of $2.75M and a NTC.  It was immediately met with much backlash from Flyers fans who questioned the length of the deal, the terms, and the effect it would have on the prospective young players.  But here is why this deal makes sense from a team standpoint.

For starters, Cleary is a heart-and-soul forward.  He’s the type of player teammates and fans can rally around.  A skater who shows hard work and effort is praised highly in the city of Brotherly Love.  He’s proven he’s a valuable asset since he joined the Red Wings in 2006.  A great two-way player, Cleary chips in offensively, but also provides a sound defensive game.  A competitor in every zone, Cleary can do a lot to swing momentum from defense to offense.  Despite what many Flyers fans think, he’s a much better option than Simon Gagne, who is now all but out of the picture.  Along with Vinny Prospal, he was one of the forwards I was pining for during the offseason.  He’s a 20-20 winger whose versatility in every situation made him such a commodity over the past few years.

Bill Meltzer of Hockeybuzz.com made an excellent point in why the Flyers seemingly overpaid for Cleary’s rights:

“When all was said and done, however, the Flyers had to go three years with a no-trade if they wanted to land the player. They were bidding against several other teams that hoped to add Cleary, so the market price was set and the Flyers elected to meet it. The thing about the free agent market is that, when players have multiple suitors, the team that lands the player almost always overpays a bit in the process. It’s just the nature of the beast, and you either bite the bullet and pay it or take your team out of the mix.

Cleary’s strong playoff run for Detroit this past spring no doubt inflated his price. He did not need to accept a tryout deal nor did he have to take a discount one-year deal somewhere. So he had leverage and his agent was wise to be patient for multiple offers to come in right before the start of training camp.”

Many opponents of this deal would argue that the youngsters (Raffl, Straka, Laughton, etc.) get the short end of the stick.  Those players were vying for a spot on the Flyers for the upcoming season and will likely have to spend more time in the AHL – which isn’t a bad thing at all.  Let’s face it.  The NHL is a whole different ballgame than Canadian juniors, college hockey, or any European leagues.  Although fans would like to see new and emerging faces, the time isn’t right for them to be playing full time in the NHL quite yet (with a possible exception to Scott Laughton).  Sure the young guys want a chance, but a year or two in the AHL isn’t the worst thing for their development either.  And they’ll likely be getting the first call-ups if any forward were to go down with an injury.

Lastly, Cleary provides even more depth to a forward core that was already deep to begin with.  He’s a veteran presence for the younger players and knows his role in the NHL.  The Flyers are beginning to take on the mold of a Brian Burke-esque team.  By that I mean, Paul Holmgren is building a team with a top six and bottom six.  The top six forwards are the skill guys who will put points on the board, while the bottom six are role players and grinders who will chip away at the opposition’s best talent.

The Flyers are always a perennial playoff team, with the exception of this past year and 2006-07.  They don’t normally put a team on the ice that can’t compete.  Fans will likely continue to complain about the signing until the season starts, but for Philadelphia to go out of its way to solidify its lineup even further goes to show that they believe Cleary can do more good on the ice, than bad.