When 18-year-old Boston Bruins forward David Pastrnak scored last Sunday against the Caroline Hurricanes, he became the first teenager in the Bruin’s 91-year history to score an overtime goal. The rookie right-winger is s on fire, bringing new energy — and points — to his team at the point in the season when they need it most.

With just 42 games under his belt, Pasternak’s 27 points has skyrocketed him up the rookie ranking list to 13th. Also impressive is his plus/minus rating of +14 which puts him in 3rd place on the rookie list, and 52nd in the entire league. He’s bagged a solid five points in his past five games and it looks like when #88 is on the ice, good things seem to happen.

Pastrnak, a native of the Czech Republic, was drafted 25th in the first round in 2014. After the draft, he started out the 2014-15 season playing for the Bruins’ primary development team, the Providence Bruins of the AHL. There, the 6’0″ right shooter chalked up 27 points in 24 games and also maintained a plus/minus of +14. At the end of November, he was first brought in to play with the big boys and, in his first NHL game played a meagre seven minutes and 53 seconds. Two games later, against the Anaheim Ducks, Pastrnak got his very first assist, on a goal by Brad Marchand.

Then was moved back to Providence for the rest of December and in the only 6 games he played, Pastrnak picked up 9 points there.

Tagged to represent his country in international Junior competitions ever since he was 15, at the 2015 World Juniors in January, Pastrnak racked up an impressive 1 goal and 6 assists over 5 games. Perhaps it’s the great amount of international play that has prepared this baby ace for the big league: in the 11 times Pastrnak has represented his country, he’s managed at least a point and often his contributions head into the double digits, like the 19 points he had as a U16 player over 13 games. Although the Czech Republic lost out in the quarter finals of the 2015 World Juniors, the Bruins management were impressed enough with his play to bring Pastrnak onto their team once the Juniors ended. 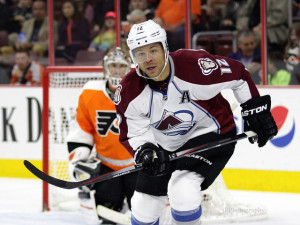 If the truth be told, the Bruins didn’t really have a choice. Having lost Jarome Iginla to the Colorado Avalanche and the 30 goals he brought to the team the previous season, the B’s were looking flat, ranking 22nd at the midway point of the season with 2.52 goals per game. The Bruins didn’t look like they would have what it takes to get them close to a playoff spot. By bringing in Pastrnak, the Bruins were able to solve two headaches: finding a player who can reliably contribute, and fit into the salary cap restrictions. And their goals per game average has improved, too, and they’re now 20th in the league, at 2.62.

On January 8th, 2015, Pasternak scored his first goal in the NHL on a pass from David Krejci, against the Philadelphia Flyers. And what a sweet play it was. It had been set up by Pastrnak right from the beginning, dropping the puck for the trailing Krejci just after entering the Flyers zone next to the right boards. He then raced into position at the left-hand side of the net, where he took the pass and shot it in. And he didn’t stop there, either. In the 3rd period, he bagged his 2nd goal, making his first scoring NHL game a multi-goal game — and was given the credit for the win. And he had other opportunities in that game that could have given him a hat trick, including a chance at an empty net, but the clock ran out before he was able to score.

Playing on the B’s second string “Spooner” line, with left-winger Milan Lucic (#18) and center Ryan Spooner (#51), Pastrnak seems to have found his place and, with that, the Bruins have the playoffs in their sights — a turn around that no one expected. But you can expect a lot from this young man, no matter what line he plays on. Pastrnak may be a teenager, but he’s got a lot of game.