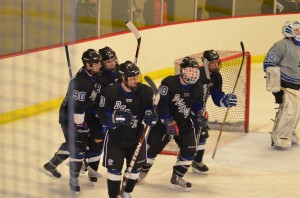 CHICAGO, IL. – Civility was hard to come by as DePaul University—for the second time in as many days—shot ten pucks to the back of the net against Eastern Illinois University goalie, Andrew Teska.

Frustrations were running particularly high for the Panthers who managed to collect forty-two penalty minutes—eighteen of which belonged to sophomore Joe Salazar.

By the third period, civility broke down at both ends of the ice with the Panthers’ sophomore Steve Kriebhauser and Blue Demons junior Joe Gatto each receiving ten minute penalties for misconduct.

Junior forward Zach Yurchakscored for the Panther’s with 13:17 left in the third frame spoiling a perfect game for DePaul freshman goalie David Kettelhut while avoiding a back-to-back shutout.

Freshman forward Mario Carbonarogot the scoring started for the Blue Demons at 16:50 in the first period on an assist from graduate forward Blake Zemaitis.  Zemaitis teamed up a second time in the frame with junior winger Brian Zmarlaki who scored at 5:39 on the clock.

Fifty one seconds later, senior winger Tony Klonowski hit the back of the net for the third time in the first frame.

Junior forward Kurt Akersgot the scoring started for DePaul at 11:56 in the second period on an assist from sophomore forward Pierce Baron and junior defensemen Jeff Fehrmann.  Fehrmann took a turn at 7:38 in the period, slapping the puck to the back of the net on an assist from Carbonaro.

Akers assisted Zemaitis who scored his first of two goals on the night at 2:28 in the second.  Zemaitis scored again at 8:15 in the third period on an assist from sophomore forward Anthony Sangiacomo. 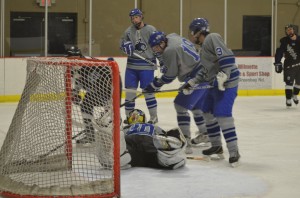 With 1:47 left in the second period, Baron combined with freshman center Christian DeVito to close out the scoring in the second frame.

Klonowski and sophomore winger David Pukszta assisted Akers who scored for the second time in the game at 19:30 in the third period.  Pukszta took his turn getting the puck past Teska teaming with Gatto and Zmarlaki at 17:38 in the third frame.

Eastern concluded their 2011-2012 hockey season falling to DePaul University Friday night 10-0 and Saturday 10-1.  A physical team who’s been plagued with injury Eastern ended their season with a 10-6-0 record.  The Panthers anticipate returning with a strong team and healthy team for the 2012-2013 season losing only senior forwards, Connor Maly and  Matthew Smart to eligibility.

The American Collegiate Hockey Association ranking committee currently have the Blue Demons ranked third behind Grand Valley and Michigan State in Central Division, despite their 24-0-3 record.

The final ACHA ranking will be announced Friday, February 17th likely leaving the Blue Demons ineligible for a first round bye which is given to the two top ranked teams in each Conference.

Senior center Billy Allen—the Blue Demons top scorer with 23 goals and 48 points—was unavailable for both games against the Eastern Panthers.