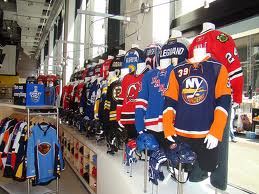 When I started writing on The Hockey Writers, I thought that it would be appropriate to get some Florida Panthers shwag. Shwag, or “schwag” depending on your preference, are the shirts, hats, jerseys, and other team gear that we love to wear in support of our favorite teams. It’s a very technical term! My search for Panthers shwag took me to their official online store, and I began browsing. The store had some interesting items, but it was a surprisingly small offering. There were a few good t-shirts, a couple of hats that I liked, and a smattering of other things, but it left me underwhelmed. I decided to look at some other team stores in order to see what different selections they would offer. I did have a hunch that the historically well-followed teams would have some more gear, and I was right. The Boston Bruins, Chicago Blackhawks, and Pittsburgh Penguins were among the leaders in variety and quantity of shwag.

All of this online shopping got me thinking about a question – what dictates the amount of offerings in each team’s online store? Is it their success on the ice? Is it their attendance? Is it the importance of hockey in the city? Most likely, I thought that it had to be a combination of these factors which actually led to the most important question – how much money is a fan base willing to spend on their team? Whether the fan base is spending money on a team because it’s winning, because it’s the only team in town, or because hockey is the most important sport in the city is just a factor in the bigger picture.

With these questions in mind, I created a small study. I wanted to see how team attendance correlated to the amount of shwag in each team’s store because I believe that attendance is a good indicator of how much money a fan base is willing to spend on their team. With that in mind, I first added up the total amount of men’s items, women’s items, and hats in each team’s store and ranked each team from most shwag to least. Then, I looked at attendance for each team in the past three years. I focused on the percentage of seats that each team filled on average during that time span. I ranked the teams from highest percentage to lowest percentage. Below, you’ll see the “Shwag Ranking” and the “Attendance Ranking.” Just a quick note – I did not look at the Atlanta Thrashers/Winnipeg Jets franchise because obviously the store offerings and attendance figures would no longer be related. Also, the quantity of goods in each NHL store is up to date as of Monday, October 10, 2011.

How do we figure out what this means? To do that I subtracted each team’s “Attendance Ranking” from its “Shwag Ranking.” This shows us whether my hypothesis that the amount of money a fan base spends on their team, as measured by the team’s attendance, correlates with the amount of shwag in the store. So for example, the Chicago Blackhawk’s “Shwag Ranking” is 1 and their “Attendance Ranking” is 1. Thus, the difference between the rankings is 0, and we understand that it makes sense for the Blackhawk’s store to have the most goods because they have had the highest attendance. The fan base is willing to spend on the team in the arena, so they have the most offerings in the store because they’re most likely also buying from the store. Below are the rest of the differences as shown in the column labeled “Difference.” The rankings are from most negative difference to most positive difference. A negative difference shows that a team is ranked higher in the quantity of items in their store than in their attendance. Alternatively, a positive difference shows that a team is ranked higher in their attendance than in the quantity of goods in their store.

For me, the most interesting finding is that the Canadian teams all have positive differences showing that they have a higher “Attendance Ranking” than “Shwag Ranking.” Most interesting is that the five highest differences are all from the Canadian teams. Why are they ranked so highly in attendance but have much fewer shwag options than teams like the Avalanche, New Jersey Devils, and Boston Bruins who have a disproportionately positive amount of shwag to attendance? Perhaps it shows the spending habits of the fans that are not coming to games? Perhaps it has something to do with the size of the cities or the fan bases?

Overall, the study shows that for the majority of the teams, we can assume that attendance shows a propensity to spend and the offerings in the stores are based on that propensity to spend. Sixteen of the twenty-nine teams examined had a difference between negative five and positive five and were in the right neighborhood. This included my Panthers who had a positive difference of two, so the Panthers low attendance correlates appropriately with their few offerings.

If you’re wondering, here is the hat that I ended up purchasing!

1 thought on “Does A Team’s Attendance Correlate To Their Official Store Offerings?”