Good day hockey fans. Hockey is rounding the home stretch and teams are jockeying for playoff positioning. Okay except for Toronto, but that’s for another time. One thing is for sure, the extra attention that comes from the postseason brings out the experienced and new fan alike. If you are fortunate enough to obtain tickets to the Stanley Cup Playoffs, there are a few unwritten rules fans should be aware of when attending a game. Even if you are experienced, a reminder of fan etiquette can never hurt.

1) Let’s start with what to wear. Hockey Gods can be very fickle, so it is advisable not to do anything to upset them. The general rule of thumb is to actually wear something in the colors of the team you are rooting for that day. It is preferable that clothing has the team name and/or logo. There are some who feel it is only acceptable to wear something with the name of a current or retired player on said team. However, if your favorite player was traded and you cannot afford a new one, wear it. Just make sure he isn’t actually playing against your team that night.

Speaking of clothing, the NHL charges a small fortune for officially licensed gear, especially in and around the stadium. While an authentic sweater (yes it is technically a sweater, not a jersey) is sweet, the average fan cares not what you paid. If you can only do a hat, then feel free to do so. We all understand. Accessories are also encouraged. Necklaces, earrings, face paint, tattoos, you name it. The goal is to have fun and let your inner fan out. 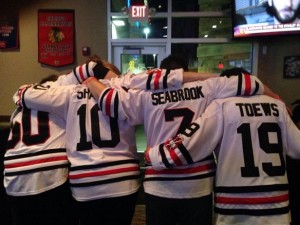 2) Now that you’ve dressed the part, it is time to get to the game. During the playoffs, there are enough rally towels and/or t-shirt giveaways for nearly everyone. There is no need to push or fight. As it relates to the giveaways (known as premiums), do not save a place in line either for your late arriving friends/family either. If they can’t get their act together in time, then see them inside.

3) Okay, you’ve made it inside and just spent $10 for a beer, $11.50 for a sandwich (a hot dog is not a sandwich) and $5 for a program. There is no need to complain about the ridiculous cost of food and souvenirs. It’s the by-product of paying for the players on your favorite team that allowed you to be here in the first place. Regrettably, the business side of hockey is neither kind nor sympathetic to the common fan.

4) It is almost game time. As you take your seat, the rules intensify. There are several things you must know in order to avoid the wrath of the hockey gods or fellow fans.

5) This last rule is for the self-proclaimed hockey experts. Embrace all fans, regardless of knowledge of the game. Everyone has to start at the beginning before learning to love the greatest sport on earth. Do not mock them, encourage them. If asked, answer questions politely, even if it is as simple as say “How many quarters are there?” or “What was that foul?” Politely let them know the correct answer, but do not rudely correct them, especially if it wasn’t directed at you. There is no need to embarrass anyone, and no-one likes a know-it-all. Whether a new fan or life-long fan who has seen the team through thick and thin, embrace the common goal. There are no bandwagon fans, only hockey fans. This is the greatest sport on earth, and every new fan is one more who can help it grow.

@Hazelton301 @NHL @NHL_Shop Not really a bandwagon when Chicago has won 3 cups in 6 years. They're just fans.

The above is by no means an exhaustive list, and I am sure I have neglected additional unwritten rules. That is where each of you come into play. Please let me know what else should be added for Volume 2.

Until then, enjoy the game. May your visit to the stadium be enjoyable, and the Hockey Gods kind to your team. Just make sure you let them know who you are rooting for :-)