While I stand by my assertion that Marc-Andre Fleury isn’t an elite goaltender (his .913 even strength save percentage is 44th overall in the NHL), after almost half the season it’s become pretty obvious that he should not be benched, at least not for Tomas Vokoun.

Yes, I’m mature enough to admit I was wrong.

The two netminders’ even strength save percentages are not that far off one another – .913 for Fleury and .908 for Vokoun – but that’s where the similarities end. Fleury has been drastically superior shorthanded, with a .904 save percentage compared to an utterly abysmal .781 for Vokoun. Their win/loss totals are equally divergent. Fleury is 10-5 and Vokoun is just 4-3. Despite his struggles, Dan Bylsma seems to be committed to his original plan of starting Vokoun about 40% of the time, which should theoretically pay dividends if the two goalies keep performing like they are and Fleury is able to stay well rested for the playoffs.

But what’s wrong with Vokoun? If he continues starting 40% of the time, the Penguins will need to find some answers fast. Vokoun certainly looks to have lost a step – not shocking for a 36 year old – and often finds himself out of position allowing some soft tap-ins off rebounds. But is that enough to explain his precipitous drop in performance – especially while shorthanded? 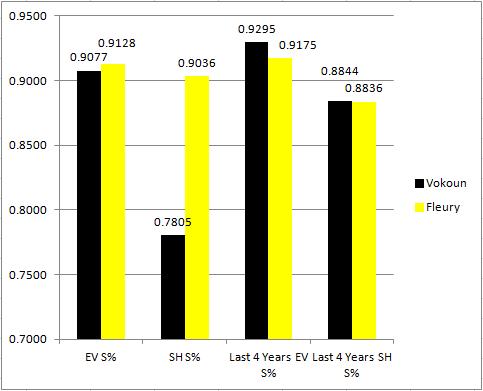 As you can see in the graph above, his .781 shorthanded save percentage is strikingly lower than his average performance over the last four years. And even last year Vokoun had a .869 save percentage shorthanded. The Penguins defense has clearly done him no favors, but he has still shown some flashes of brilliance with saves like this one.

So rather than relying solely on the eyeball test, are there any metrics to explain his struggles?

First of all, wins and losses are a bad way to measure a goalie’s performance, but Vokoun has appeared, at least to me, to be worse than his record. The win/loss tally, for instance, doesn’t include the game against the Florida Panthers in which Vokoun was pulled after letting in four goals. It also tells nothing of his dreadful six-goals-allowed performance against the Montreal Canadiens.

I mentioned that the Penguins’ blue line certainly hasn’t helped Vokoun at all. The defensemen are still as porous and lackadaisical in front of their own net  as the were last year. But both goalies play behind the same team, so theoretically they should both be playing with the same handicap. 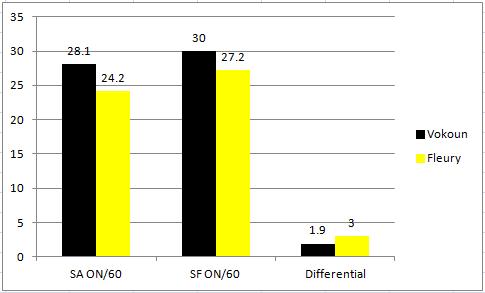 Looking at the stats, however, it’s clear that the team plays better in front of Fleury. The 5 on 5 shot differential – which is an excellent way to measure puck possession and thus team performance – is decidedly in Fleury’s favor. On a per-60-minute basis, the Penguins have outshot their opponents by just 1.9 shots with Vokoun in net and 3 shots with Fleury.

So why is this? I don’t think that there’s any way to know for sure, but it could be that the Penguins are less confident with Vokoun in net and are trying to play more wide-open hockey, pushing offensively in an attempt to score as much as possible while abandoning their defensive duties. As you’ll notice, their own shot totals are up with Vokoun in net as well.

I don’t know whether that comes naturally from the players or by design from the coaching staff, but it’s something worth looking at.

The Penguins are also being vastly outshot shorthanded with Vokoun in net compared to Fleury. On a per-60-minute basis, the Penguins are allowing seven more shots against on average with Vokoun than they are with Fleury. But I’m having a more difficult time figuring out why this may be. (This graph includes all even strength shots, not just 5 on 5) 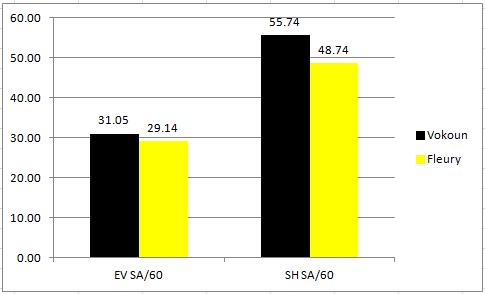 If the Penguins are truly less confident with Vokoun, it would seem reasonable that they would clamp down in this scenario. They’re not pushing to score shorthanded. It could be that Vokoun’s rebounds are inflating the total, since every time he fails the freeze the puck he creates more work for himself.

But no matter what the reason, it doesn’t immediately explain why Vokoun is saving so few of the shots against him shorthanded. To figure out why this is, we’ll have to go to the tape.

#1: The first powerplay goal against Vokoun came on a 5 on 3, so it’s hard to blame him too much. He failed to control the rebound off the initial shot leaving it right on the doorstep for a tap-in by Callahan. You can see Vokoun clearly lose track of the puck off his pads and he did not get over quick enough to stop the second shot. To be fair, though, it was a 5 on 3 and it was a pretty sick play by Callahan to bat it out of midair. I’ll stop short of calling this one Vokoun’s fault.

#2: The second powerplay goal came on a blast from the point by Dustin Byfuglien. You can see in the video that Kris Letang and Brooks Orpik were standing completely flatfooted allowing Nik Antropov to set a screen and obstruct Vokoun’s view.

#3: The third powerplay goal is more on Vokoun. It was a great (possibly lucky) pass by Nicklas Backstrom to get the puck in front to Mike Ribeiro, but Vokoun overplayed the puck initially and left himself too far out of position to get back and attempt a save after Ribiero bobbled it.

#4: This one is a bad rebound. Someone should have cleared Clarkson out, but Vokoun can’t let the puck bounce right out in front like that.

#5: Another bad rebound by Vokoun. After leaving the puck on a platter for Simmonds in front, Vokoun did a good job of getting the paddle down, but unfortunately he was too far out of position to get back and save Vorchek’s shot from the side of the net after Simmonds dished it out.

#6: This is where the wheels fell off. The next four powerplay goals against all came in the same game – a 6-4 loss to Florida. This first one is another bad rebound, instead of kicking the puck out to the corner, it went right to Kopecky’s stick and then the back of the net.

#7: This one wasn’t technically a 5 on 3 goal, but the Penguin coming out of the box had not yet made it back into the play. I can’t blame Vokoun for this one. Kopecky was right in his crease setting a great screen, and by the time Craig Adams cleared him out it the puck was already in the net.

#9: The final powerplay goal against isn’t nearly as bad as the previous one. The Penguins D hung Vokoun out to dry.

From this I think it’s clear that Vokoun is not simply a victim of circumstances, not all the goals are on his shoulders but he’s not controlling the puck well and making the saves he needs to make consistently. The higher shot totals certainly don’t help him, but those totals could be lowered if he let out fewer juicy rebounds. The team isn’t off the hook either. They need to tighten up and put him in a better position to win. If Vokoun is truly lagging Fleury, as it appears, the Penguins must do the best they can to stay out of the box and limit the shots that get through, especially shorthanded, since at this point it looks like he’ll continue to be making regular appearances in net.