The NHL is back!  There were some pretty nice moments during opening week.

A few teams named new captains before opening day. In Philly, EA spokemodel, Claude Giroux, proved he was more than a pretty face when he accepted the C from Flyers GM, Paul Holmgren.  In an official statement from the club, Holmgren praised Giroux, a team-oriented player who has never hesitated to share both the accolades  and brickbats that are lobbed in the general direction of the Bullies.

“Claude is the undisputed leader of this team. He always exhibits a tremendous work ethic in games and practices.  He is a great professional both on and off the ice.  Claude has learned a lot over the past few years playing with Mike Richards, Danny Briere, Kimmo Timonen and Chris Pronger, just to name a few.  Having played with these athletes has been a huge benefit for Claude.”

Meanwhile, on the internet, hockey fan Mike McG noted that  Henrik Zetterberg was named captain of the Red Wings.  Other new members of the captains club include Ed Jovanovski, who is helming the Cats in Florida and Bryce Salvador, who stepped up to take the C once Ilya! Ilya! Ilya! left New Jersey bedeviled for a few days.

They Liked It So They Put A Ring On It

Many franchises start the season with swag that would make the most cynical fan go all Smeagol over the preciousssses being offered at the turnstiles.  The mini-banners presented to fans by the current league champions, the L.A. Kings, were very nice.  However, the sweetest bit of swag is still in storage, slated to be given away at the January 28th game against Vancouver.  What sort of tchotchke would get so many people in state of anticipa…tion?   Behold the replica championship ring:: 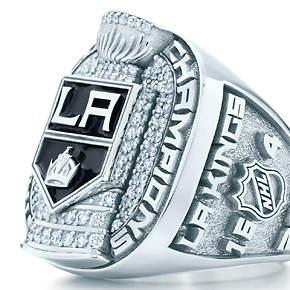 This beats the consolation mini Stanley Cups the league gave away after the last lockout.  To get yours, you’ll have to be there and ready to yell for the Men in Black at Staples Center on the 28th.

The Banner Ceremony in L. A. Mixed the Bitter with the Sweet

Nelba Marquez-Greene recounted a time when she was feeling anxious and her daughter, Ana, noticed her discomfort.

Pretty sage advice from a six-year-old.

That exchange was one of the small peeks the American people were given into the lives of the twenty children who were killed in the Sandy Hook Massacre in December.  Ana’s parents, Nelba and Jimmy, and her eight-year-old brother who plays hockey took her advice to heart.  The accepted an invitation from the Kings to represent families who enjoy hockey through community development programs at the banner presentation last week.  They were among the dignitaries, alumni, and team members who stoodo n the ice as the banner was raised to the ceiling of Staples Center.

As with so many other things that can hurt us, hockey might not be the cure, but it can help heal.

Alexander Ovechkin might be home as far as Caps fans are concerned, but Caps CEO Ted Leonsis wants you to know Sasha didn’t spend the lockout sitting around eating pizza.

Post NHL invasion, many of the teams who welcomed comrades in arms remain strong.  CSKA is second only to SKA in the Conference of the West.  They are followed by Dynamo Minsk and Lokomotiv, who are keeping the margin between them respectably small. Over in Conference East, Vanguard still leads with 96 points followed by AK Bar with 91.  Third and fourth positions are held by Metallurg Magnitogorsk and Traktor.

The Rocket Richard  Trophy and 2004 Stanley Cup winner will reach his latest career landmark tonight as the Bolts face off against the New York Islanders on their ice. Lecavalier is the 49th player in the NHL and the eighth active player to reach that thousand game mark while playing for the same team. Even though Game 1K is taking place on the road, there will still be a celebration in his honor on the 25th, when Tampa Bay plays the Senators at the Tampa Bay Times Forum.

That’s it for this week.  This is Jas Faulkner for THW reminding you that the little guy or girl who wants to snuggle with you on the couch while the game is on will be that age for 365 days and only 365 days. Don’t ever take any of them for granted.  Make room in your day, during the game and on that couch for the little one who just wants to be near you.  (And hey, you really didn’t need all of those Doritos anyway.)   See you next week!