With Ottawa Senators center Matt Duchene set to return to the lineup Friday against the New Jersey Devils, and with head coach Guy Boucher calling Duchene “one of the pillars” of the Sens, it seemed an opportune time to revisit his contract situation, along with one of his teammates.

Duchene, who turns 28 in January, is in the final year of a five-year, $30 million contract (cap hit of $6 million), a deal that was inked while he was a member of the Colorado Avalanche. Over the weekend, Bruce Garrioch of The Ottawa Sun wrote that Sens management and Duchene’s agent Pat Brisson are expected to pick up contract talks in the coming weeks in order to try to hammer out a deal. Brisson has met with the team twice thus far.

But Duchene’s impending unrestricted free agency isn’t the only one the Sens have to worry about (nor the only off-ice distraction at the moment). Winger Mark Stone, who turns 27 in May, is also on an expiring deal. Stone avoided arbitration in the nick of time this past summer, signing a one-year, $7.35 million deal in August.

While Stone and Duchene aren’t the only UFAs for Ottawa this summer, they are, unsurprisingly, leading the way on offence for the Sens up front. Because of their point totals, and how much coach Boucher uses them, they are the most important negotiations for the Sens.

Even with next year’s reported ceiling of $83 million, it’s tough to see both Duchene and Stone staying, given that each will likely command in excess of $8 million per season. With Melnyk’s spending habits, it’s unrealistic to assume he will get anywhere near the new salary cap. The $75 million range for the Sens is more likely, which can’t work if both Duchene and Stone are brought back, as that would leave roughly $15 million left to sign 12 players.

So how much exactly might Duchene or Stone cost? That’s what we must examine before we can jump right to the “Who’s worth more?” question.

There are only nine forwards in the entire NHL who signed a long-term extension between age 27 and 29 that pays them $7 million or more per season (Duchene’s range). Of those nine, four were signed in 2013 or earlier and one was signed by a league superstar in John Tavares, so I’ve discounted those (Ryan Getzlaf, Corey Perry, Zach Parise, and Evgeni Malkin, if you were wondering).

That leaves the following four players.

Before you start shouting and screaming at your laptop screen, let it be known I have not included Anze Kopitar because I think Matt Duchene will command $10 million per season. He is here because there are valuable similarities to explore. They share the same agent in Pat Brisson and they are the only two on this list to have amassed over 500 career points (at the signing date).

In terms of his career points/game, Duchene is right on par with David Krejci and Bobby Ryan, and because the cap has gone up significantly between 2014 (when they signed) and now, I would say that $7.25 million per year is Duchene’s absolute floor. That’s why I’ve included the contract’s percent of the ceiling at the time. With next year’s ceiling estimated at $83 million, 10.51 percent of that (what Krejci and Ryan got) would earn Duchene $8.72 million per season.

The problem with that number is it’s more than Leon Draisaitl’s $8.5 million average-annual-value (AAV), a contract the 22-year-old signed last summer. On the other hand, pending UFAs have more leverage than RFAs, so I don’t think it’d be unrealistic for Duchene to fetch $8.25 to $8.5 million on the open market.

If that happens, it’d probably be on a five-year deal like JVR, instead of a seven-year deal. Regardless of the term, it’s clear the Sens are going to have to pay up for Duchene, given his career numbers and the strong season he’s having.

There are two key differences when it comes to Stone.

First, he is a year and a half younger (a positive for him). Second, he does not have the body of work Duchene does (just 288 career points as of this writing versus 511). He does, however, have an edge in career points-per-game (Stone leads 0.84 to 0.75).

Let’s start with $7.35 million as the base because that is what Stone settled for on a one-year deal this past summer.

And let’s use Seguin’s contract in much the same way as Kopitar’s with Duchene; it is the upper extreme. The only similarity shared between Stone and Seguin is their career points-per-game. Given that Stone has just over half of Seguin’s career points to date, we can assume he won’t get near that $9.85 million figure.

The figure that most closely resembles Stone’s next contract is Jakub Voracek’s, for a few reasons. First, they are both wingers, not centers (centers on average earn more). Second, it’s likely Stone will have a season similar to Voracek’s 81-point season in 2015 (when he signed). Stone is currently producing at over a point-per-game (something he did last year in 58 games) and his career points-per-game is much stronger than both O’Reilly’s (0.58) and Johansen’s (0.67). Stone probably finishes this season with 70 points (0.85 P/G).

Voracek’s deal was 11.55 percent of the cap at the time of the signing. That equivalent for Stone under an $83 million cap would be $9.59 million per season.

I don’t see any general manager, whether it’s Pierre Dorion or anyone else, doling out that kind of money for Stone. That being said, we know Stone reportedly asked for $9 million per season in arbitration this past summer. Looking at comparables, he may just be worth it.

If he does ask for that, he’s as good as gone (which is also why I think Duchene is more likely to stay than Stone).

Who is More Valuable: Duchene or Stone?

The amount of money players sign for is often less than their actual worth. Or, it can be way beyond their worth.

So who is actually worth more, Duchene or Stone?

We’ve already looked at some of their career stats, but let’s revisit those quickly.

Stone has the benefit of age and a higher points-per-game, while Duchene has a much greater body of work.

Before we come to any conclusions, let’s look at some advanced stats.

What does it all mean?

First off, this season Duchene has produced considerably more points than Stone, while Stone has produced significantly more offensive chances (leading in all four shot and chances metrics), despite starting more in the defensive zone.

In the past three seasons, Duchene and Stone have produced essentially the same amount of points, but once again Stone has created significantly more chances, although they have both started roughly an even amount of shifts in the defensive zone.

This tells me two things: Stone is a better bet to produce long-term, and the coaching staff in Ottawa now trusts Stone a lot in the defensive zone (something they didn’t before) and this year he has still managed to turn those situations into offence.

But wait! There’s one thing that isn’t accounted for. What about quality of linemates?

Well, thanks to Sean Tierney at Charting Hockey, we have a way to determine this, at least when it comes to shot rates (clearly doesn’t tell the whole story but a good indicator nonetheless). 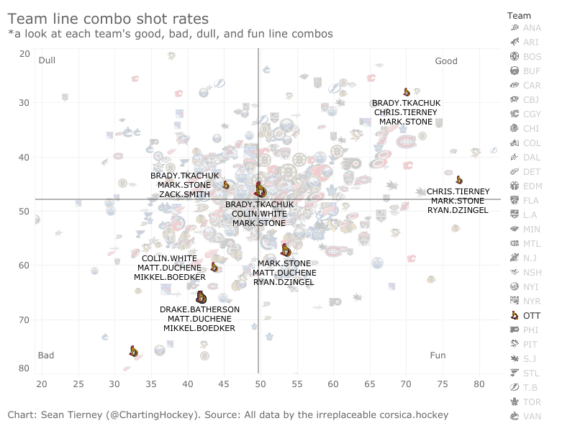 When Stone is not with Duchene, that line either creates plenty of chances and doesn’t give up very many, albeit in limited ice-time (Dzingel, Stone, and Chris Tierney or Brady Tkachuk, Stone, and Tierney are both way off in the ‘good’ quadrant) or that line plays responsible, as is the case with the currently constructed Stone, Tkachuk, and Colin White line (49.97 CF, 46.09 CA in 157. 6 minutes).

When Duchene is not with Stone, he suffers, whether he’s with White and Mikkel Boedker, or rookie Drake Batherson and Boedker (the small Sens logo not labelled in the bottom left is also a Duchene line, one with Batherson and Dzingel).

What becomes clear is that Stone can drive offence without Duchene, while Duchene hasn’t been able to do so this year in Ottawa without the help of Stone.

So while I think Stone is the one who walks and Duchene re-signs, it’s clear to me that Stone is the more valuable player.