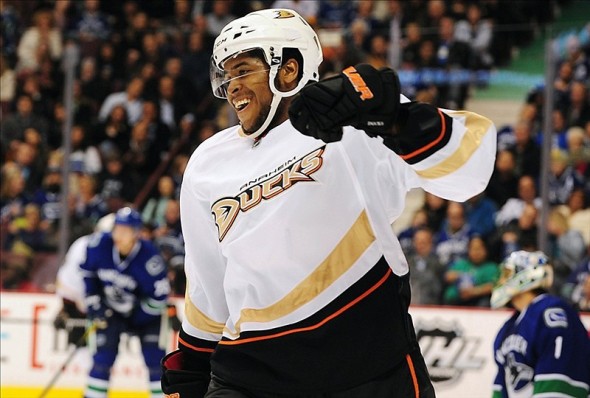 The Ducks did what they’ve done better than any other team in the NHL all season. Once again, they were down early but managed to squeak out another come-from-behind victory, something no other team has had nearly as much success in. With the win, which happened to be the first one on the road in the Ducks/Stars series, the Ducks now await the winners of the Sharks/Kings series. So for the first time since 2008-09, fans of Hollywood’s team get to watch them play in round two. Check out the full recap here:

The first two-goal game of Devante Smith-Pelly’s career couldn’t have come at a better time. The 21-year-old, who was recalled just three weeks ago, showed incredible patience in the dying seconds of the game. Corey Perry made a great play off the half-boards to close the gap between himself and the net, sending a wrister in on Kari Lehtonen that no doubt left a mark. On the ensuing rebound, Perry, as well as Nick Bonino and Francois Beauchemin, crashed the net with all the might they could muster. Every single Star on the ice collapsed deep in hopes for a whistle on a dead puck, but thanks to Beauchemin’s aggressive poke-checking (seriously watch Beauchemin a little closer, those jabs have to leave a mark or two) the puck rolled free to Lehtonen’s right. Because of the mad scramble, Cody Eakin forgot where his man was, who was patiently waiting in the corner for a golden gift to appear.

You can’t give enough credit to Smith-Pelly here. There was no need for him to join the onslaught at the top of the crease, so he waited for his moment. When it arrived, he didn’t rush the shot, which anybody might have in that position. Smith-Pelly saw the puck sliding toward him, waited a second or two, which seems like hours when you watch the replay, and neatly corralled it in to send the game to overtime. Absolutely Beautiful. With less than a minute in game six of the playoffs, the nerves might overcome anybody, forcing one to hit the goalie’s pad, the post, or just miss the net in general. You know, it tends to happen sometimes.

Credit is also owed to the ref for his ability to adjust his position in order to create an advantageous angle and maintain eye contact with the loose puck. But enough about the game-tying goal, what about the freakin’ game winner? That one came off of the stick of Nick Bonino, who is in the midst of his breakout year. In his fifth season, Bonino finished with career highs in pretty much every category, and is continuing his success in the post-season. The Hartford native finished third in scoring behind Perry and Ryan Getzlaf, and sits in a tie for the same position through six games against Dallas.

With his team down two goals with less than three minutes to play, Bonino also happened to kick-off the comeback. Perry used the boards to his advantage, as he’s wont to do, and noticed Bonino was left all by his lonesome on the other side of the net. With a diving play, Perry managed to poke the loose puck toward Bonino who stepped in front and finished the job in front of the stunned Finnish goaltender. Ladies and gentlemen, if your shingles are falling apart, give Bonino a call.

Bonino scored two goals, including the winner, to advance the Ducks to round two.

Now what happened next is a lot like what happened to the Leafs in last year’s playoffs. With a 4-2 lead, Dallas surrendered two goals in the dying minutes and lost any hope of gaining momentum back. They then gave up a goal early in overtime to end the series. Not long after hitting Hiller’s post (which was a lucky bounce) the Stars were hemmed in their own end. Patrick Maroon stationed himself in front of the net leaving Andrew Cogliano time enough to find an open Bonino in the slot. Lehtonen never managed to see the pass which practically left a 4×6 for Bonino to shoot at, and he made no mistake. While the Stars deserve a ton of credit for getting as far as they did, the fans deserve as much and more. They cheered hard for an underdog team and even continued cheering long after the game was over. It was all class in Dallas, well done.

Now, If Bonino is the first star (beginning the comeback and scoring the winner), and Smith-Pelly is the second star (scoring Anaheim’s first goal and the game-tying goal), then who is the third star? This corner believes it should be the coach. The guy who pulled his goalie against common convention and gave credit for the play to somebody else. We all know what tends to happen in the NHL when your team is down a goal. Everyone attempts to hem the puck in deep in the offensive zone, giving the chance for your coach to pull the goalie for an extra attacker. This usually happens with 45 to 75 seconds remaining in the game, which tends to negate any chance of setting up planned formations. However, in comes Patrick Roy, the rookie coach, and everything changes.

While Roy was coaching the Remparts in Quebec, he distanced himself from convention by pulling his goalie with more than just a minute left. If the right opportunity arose, you might see the extra attacker out there with as many as three of four minutes left. When Roy made the jump to the big leagues, that didn’t change. Several times this year the Avalanche forced overtime by pulling the goalie earlier and tying the game. Last night, Bruce Boudreau took a page out of Roy’s book and pulled Hiller twice – the first time with 2:26 left in regulation. He had this to say after the game:

But if you’re lazy, here’s the quote:

Boudreau: “I have to thank Patrick Roy. If he didn’t start pulling the goalie so early all year, I don’t think any of [us] would have.”

In the regular season only two teams who made the playoffs had a worse powerplay percentage than the Ducks (22nd, 16%): Dallas (23rd, 15.9%) and Los Angeles (27th, 15.1%). Though Anaheim has only played six games, they have vastly improved their play on the mad-advantage, boosting their ranking to fourth among the 16 teams. The Ducks have connected seven times in 26 opportunities, good for 26.9%. Those seven goals are also one more than Boston and Columbus who have the second most. On the penalty kill, Anaheim fared much better during the regular season to the tune of 82.2% and 13th overall. but improvements have been made here as well, with a 7% boost and another fourth place ranking. The Ducks are the most dominating 5-on-5 team in the NHL thanks to their size and skill up front. If they can maintain their success on both the pp and the pk they will be serious contenders down the stretch. For now, they will go back to the drawing boards and await the winner of the all-California battle to set up yet another one. But you might not have to wait long as the two teams meet at 7:00 p.m. Pacific tonight, and the Sharks have a 3-2 lead. Tune in and keep a close eye.