An Early Summer in Detroit

An anticlimactic five game series against the big bad Bruins wasn’t exactly what the Red Wings had in mind when they qualified for the playoffs for the 23rd consecutive year. Coach Mike Babcock initially had high hopes, prompting him to say that his squad would be a “tough out,” a statement that he was forced to revise after game 5. Now, the process of reviewing the season and looking ahead to this summer begins in ernest in Hockeytown. Today, we’ll look at the blueliners on the Detroit roster, and evaluate their contributions throughout the season.

Defense was a liability in Detroit this season, who finished the regular season with a very mediocre 2.70 g0als against average per game, putting them at 16th in the NHL, and a similarly unexceptional average  29.3 shots allowed, enough for 14th in the league. Mlive.com’s Ansar Khan reported that the Red Wings looked to improve the situation on defense at the trade deadline, but the cost was prohibitive, so they stayed out of the market. Expect the Red Wings to push hard for one of their former trade deadline targets this summer, namely  Christian Ehrhoff or Alex Edler.

But now, without further ado, your 2014 Detroit Defense Report Card.

Smith finally had a year that many in Detroit knew that he was capable of having. After struggling last year with his turnovers, he became more responsible with the puck…

…with the exception of this gem:

Additionally, Smith showed his offensive potential, notching 19 points in 71 games. He even saw a game at forward this year, which was pretty uneventful, although it served as a reminder of how banged up the Red Wings got throughout the year. Penalties still remain a problem for Smith, who racked up 68 PIM, in addition to finishing with a +/-  of -2 on the season. He’s known to take the most risks among Red Wings defensemen, which can sometimes end badly for him in the form of an odd-man rush or a turnover. Overall, improvement is noted, but Smith needs to reduce the penalties which make him a liability.

While he managed to score as many points as Smith, Kindl was helped this season by the fact that he played some of the year with promising young gun Dan DeKeyser. Kindl’s season can be summed up by the decision to replace him with prospect Xavier Ouellet in game 5 of the playoffs. After completing last season with  13 points in 41 games, a +15 +/-, the hopes were high of Kindl. Instead, he lost ground, looking shaky and vulnerable on defense.

This season, he declined to a -4 and put up only 6 more points in 25 more games. However,  he kept his penalty time down, which is never bad.

We will, however, credit him with 1 save, since this was pretty cool.

Lashoff quietly moved to the NHL full time this season, after playing 31 games of the shortened season in Detroit last year. While certainly not the flashiest Red Wing, Lashoff does his job and doesn’t make himself too much of a risk to have on the ice. Although he has been serviceable in his role as a bottom two pairing player, the Red Wings could use an improvement at this spot.

His style of play is not shutdown, and he isn’t putting up the numbers to be a viable puck mover (1 G, 5 A, 75 GP) . He’s a bigger body, which helps his case, but that only goes so far. Given this was his first full NHL campaign, I won’t be too critical, as he stayed healthy and was not disastrous.

The only Red Wing defenseman who received give two grades, Quincey’s 2013-2014 campaign improved as it went on. His poor grade reflects his play before the Olympics, and his B- represents his meritorious play down the stretch and into the playoffs. Before looking at his positives, the largest black mark on Quincey’s report card are his whopping 88 PIMs, which during the course of his 82 game season figures to be more than a penalty every other game. This has given rise to the popular twitter hashtag #BlameQuincey, and even an account of the same name.

On the positive side, Quincey chews up a lot of minutes for the Red Wings, coming in at fourth on the team. He has noted that playing with Dan DeKeyser has helped him improve. Another source of pride for Quincey this season was his health. He was in the lineup for every game the Red Wings played, and provided them with a veteran presence on the blueline, even if it was a struggling one for the first half of the year.

The future of Quincey’s relationship with the Red Wings is foggy at best. As an unrestircted free agent, Quincey will not be the target of a big money deal from the Red Wings, who are looking to bring in new talent.

“Big Rig” as he is known to Red Wings fans, had a really promising start to the season. He was cruising toward a career high in production, and was looking comfortable (most of the time) in his top-pairing shutdown role with Nik Kronwall. Then, disaster struck. Jonathan Ericsson sustained a badly broken finger on March 18th, and Brendan Savage reported that it required surgery to repair tendon damage. Not good at all.

I see Ericsson’s injury as the number one reason the Red Wings were unable to slow Boston’s offensive firepower. His physicality and experience robbed Detroit of a true top pairing, and it was painfully evident every time the Bruins entered the Red Wings zone cleanly. Red Wings coach Mike Babcock remarked that “[w]e missed Ericsson big-time. He’s an important guy for us.”

While it is no use dwelling on what  might have been, it is safe to say that this injury impacted the Red Wings playoffs in a big way. At 30 years old, the big Swede is still a big part of Detroit’s plans, and a speedy and full recovery will do much to improve the Detroit defense.

Like the letter he wears on his jersey, Nik Kronwall earns an A for his leadership, poise, and play though the 2013-2014 season. Finishing with an even +/-, Kronwall was the de facto captain of the Red Wings when Henrik Zetterberg went down with his back injury. Missing only 3 games this season, Kronwall was ready to play almost every night for the Red Wings. Producing only two fewer points (49) than he did during the Red Wings 2008-2009 season (which ended in the Stanley Cup Finals), Kronwall stepped up when his team needed it most, the mark of a true leader. Kronwall also effectively cut his penalty minutes in half, by taking as many minutes as he did last year (44) in almost twice as many games while leading Detroit in time on ice. His five  power play goals are also tied with his career high.

Kronwall’s stats speak for themselves. He played inspired hockey, helping the Red Wings in their playoff push amidst many injuries. Kronwall’s high grade also takes into account his accountability off the ice, when he recognizes his need for improvement, and the fact that he often serves as the team’s spokesman to the media. Kronwall is the kind of player that is good for a team in many ways, and he will be a leader of Detroit’s defense for years to come.

While Nik Kronwall is the “present” of the Red Wing defense, young star Dan Dekeyser is the future. At only 24 years old, DeKeyser is showing great ability to be a shutdown defenseman with great responsibility. He is often counted on by Detroit to make the first pass out of the defensive zone, and he has great vision of the play before it develops.

Mickey Redmond’s description of a “veteran play by a young player” is descriptive of DeKeyser’s performance in Detroit since he was signed out of Western Michigan University last season. 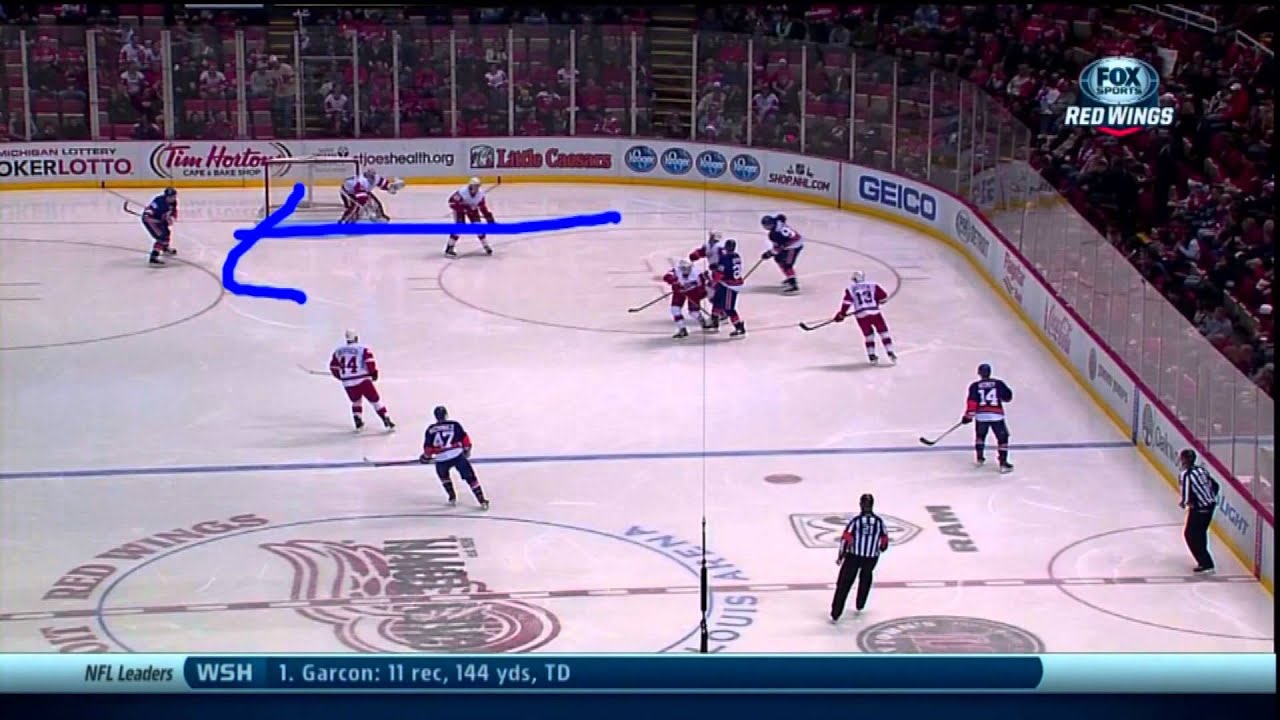 This smart play is just one example of the many little things DeKeyser does right, making him a really complete player. While he still takes his share of penalties, and has an occasional “rookie moment,” Dan DeKeyser is a vital part of Detroit’s defensive corps. His 23 points in 65 games are second only to Kronwall, and he finished a fantastic +10 in +/-. These stats and his “veteran play” make DeKesyer the only Red Wings defenseman other than Kronwall deserving of an “A” rating.

As the talent increases, so do the grades. Perhaps part of Detroit’s problem this season was that while the top pairings were doing their jobs, the bottom four struggled to maintain control and poise. In order to compete next year, the Red Wings will need to have four solid pairings. While each pairing has a different role, responsibility is key for each. A fourth pairing and a top pairing will never have the same effectiveness (if the talent is distributed properly), but they should at least both provide the team with a steady and stable back end. If an improvement can be seen amongst the bottom four in the Motor City, so will it go for the entire team.