TAMPA, Fla. — Ryan Miller made 34 saves, Nick Ritchie had a goal and an assist, and the Anaheim Ducks beat the Tampa Bay Lightning 3-1 on Tuesday night.

Miller won his 373rd game, moving past Andy Moog for sole possession of 17th place on the career wins list. He also moved within one victory of tying John Vanbiesbrouck for the most by a U.S.-born goalie.

Josh Manson and Carter Rowney also scored for the Ducks.

Miller stopped Victor Hedman’s first-period rebound with this left arm while prone on the ice, and turned aside Brayden Point’s shot on a breakaway in the second.

Tampa Bay, 3-1-0 on a five-game homestand, got a goal from Point. Louis Domingue stopped 19 shots.

The Ducks went up 3-1 on goals by Ritchie and Rowney in a 49-second span early in the third period.

Ritchie swatted home a knee-high puck after Pontus Aberg’s power-play shot went off the glass and wound up in from of the crease at 4:51 of the third.

Rowney made it 3-1 on a backhander. 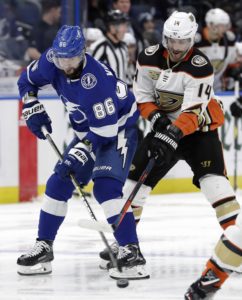 Point skated down the slot and got his 18th goal of the season off a pass from behind the net by Nikita Kucherov, tying it at 1-all with 1:26 left in the second.

Kucherov has 13 assists and 15 points during a seven-game points streak. Point has four goals and six points over his last three games.

Manson opened the scoring from the low slot at 12:04 of the second after Domingue stopped Adam Henrique’s attempt to stuff the puck into the net from near the post.

Lightning: Host Buffalo on Thursday. The Sabres will be looking for a franchise record 11th consecutive win.