BUFFALO, N.Y. — The Buffalo Sabres had to go to overtime after squandering a two-goal third-period lead, but they still made it a perfect 10.

Jeff Skinner scored his team-leading 19th goal 1:19 into overtime, and the Sabres won their 10th straight by beating the San Jose Sharks 3-2 on Tuesday night.

Rasmus Ristolainen scored off a deke around Brent Burns, and Nathan Beaulieu also scored for Buffalo, which hasn’t lost since Nov. 4.

Carter Hutton stopped the first 32 shots he faced and 36 overall to extend his personal-best winning streak to eight, during which he’s allowed just 15 goals. 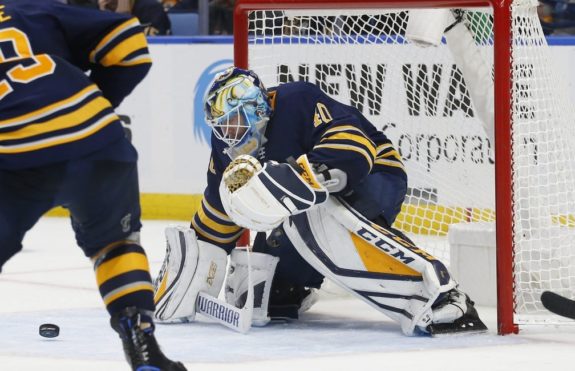 Joe Pavelski scored twice for the Sharks in the final 8 1/2 minutes to up his team-leading total to 15.

Martin Jones stopped 28 shots and had little chance on any of the three goals.

The decisive goal came after Jones poked the puck away from Sabres defenceman Rasmus Dahlin, who was driving to the net. Skinner followed by beating Evander Kane to the loose puck and scored.

The Sharks, coming off a 6-0 loss at Vegas on Saturday, earned a point to move into a tie with idle Calgary for Pacific Division lead.

Pavelski forced overtime by scoring a power-play goal with 3:18 left, when he came out from behind the net to wrap a shot just inside the left post. He cut Buffalo’s lead to 2-1 some five minutes earlier by one-timing in Burns’ pass from the right point.

By improving to 17-6-2, the Sabres are eight wins short of matching last season’s total, when they became the NHL’s first team to finish 31st in the standings following the addition of the expansion Golden Knights. Buffalo has also won six straight at home to mark its best streak since a 7-0 run from Nov. 28 to Dec. 15, 2014.

Fans got caught up in the excitement with Buffalo up 2-0 in the third period by counting to nine and then chanting: “We want 10!”

A turnover deep in the Sabres’ zone led to Tage Thompson feeding a perfect cross-ice pass that hit Ristolainen in full stride up the left wing. Crossing the blue line near the boards, Ristolainen slipped the puck through his legs to avoid Brent Burns and drove to the net, where he flipped a shot over Jones’ left shoulder.

Buffalo extended its lead to two when Beaulieu scored 4:14 into the third period off another Sharks turnover. Sam Reinhart sped up the right wing and snapped a hard pass through the crease, which Beaulieu redirected while driving the left post.

Hutton’s best save came 17 1/2 minutes in, when Joe Thornton attracted three defenders in the left circle and fed a wide-open Marcus Sorensen at the right post. Sorensen one-timed it only to have Hutton slide across in time to glove the puck.

NOTES: After playing at Toronto on Wednesday, Sharks D Erik Karlsson will make his first return to Ottawa on Saturday since the Senators traded their former captain and two-time Norris Trophy winner to San Jose in September. … Kane received mostly a warm welcome upon being introduced early in the first period in his first game in Buffalo since the Sabres traded him to San Jose in February. … Sabres D Lawrence Pilut was a healthy scratch after being recalled from AHL Rochester earlier in the day. …. Sabres LW Conor Sheary missed his first game with an undisclosed injury, a day after leaving practice early.

Sharks: Continue their five-game trip at Toronto on Wednesday night.