Cam Fowler arrived to the Anaheim Ducks with much fanfare in the summer of 2010. Ranked as the fifth-best North American skater going into that summer’s draft, he was seen as a steal for the Ducks after having slipped to 12th overall.

It felt like a passing of the torch for the young franchise, with the recently retired Scott Niedermayer handing Fowler a Ducks sweater as he walked on to the stage at Staples Center.

Fowler’s smooth-skating game had been compared to Niedermayer’s going into the draft, so the moment felt all too poetic.

The concerns that led to the young defenseman slipping to 12th felt more like an old-school bias against more offensively-minded blueliners than anything else. The thinking then was that if a defenseman couldn’t smash someone through the glass, then he was already at a disadvantage. Those fears were obviously antiquated, but there’s reason to think that the scouts may have been onto something.

The Flaws In Fowler’s Game

First and foremost, let’s get this out of the way: Fowler isn’t Anaheim’s best defenseman, and he hasn’t been for a while.

Though he’s excellent when it comes to exiting his own zone, that hasn’t translated to his overall possession rating. In fact, he’s only had two seasons in his career where he’s finished above break-even in shot attempt differential, and those were by the slimmest of margins.

To be fair, he’s never had the luxury of skating with a strong partner. Take the last two years for example, where he’s spent the majority of his even strength minutes skating with Ben Lovejoy and Kevin Bieksa. Not exactly elite company. The Ducks’ coaching staff might think that he’s capable of elevating lesser partners, but things clearly haven’t shaken out that way.

Some of that can be attributed to Fowler’s lack of defensive awareness. There are times where he seems oblivious to who he should be covering. Take this recent example against the Winnipeg Jets, where Fowler (on the far right of the first frame) doesn’t take note of his man flying through the neutral zone until it’s too late: 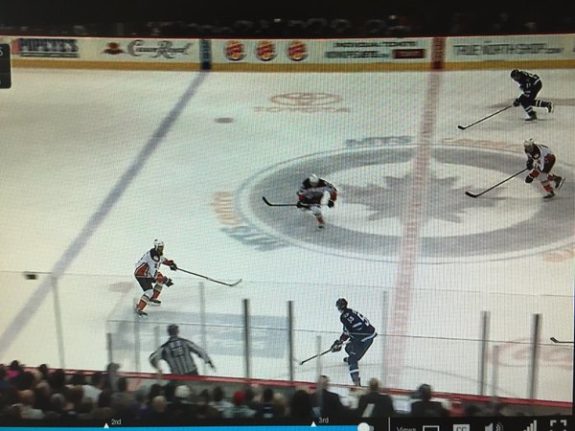 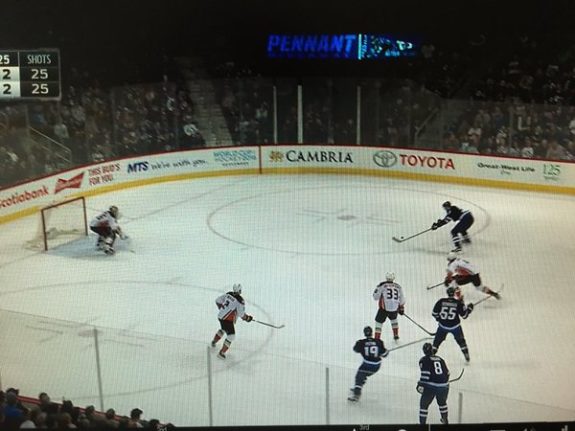 Fowler focuses all his attention on the strong side which is already covered by his teammates, not noticing a Jets’ attacker cutting in on the weak side. Luckily for Anaheim, the pass into the slot doesn’t get completed, but the play itself is symptomatic of Fowler’s lack of awareness, which is reflected in his underlying numbers.

None of this is to say that Fowler is bad player, or even a mediocre one. However, we now have a large enough sample size to safely conclude that he’s just not the two-way anchor that some observers might have pegged him as. All that being said, he can still be an extremely valuable player for the Ducks.

The Strengths Of Fowler’s Game

One word: speed. A whole lot of speed. Fowler plays the game on another gear, especially when he has the puck on his stick. Take this recent rush up the ice against the Montreal Canadiens, where he essentially skates right around hapless defenders:

That elite skating is a great asset for Anaheim’s transition game. He’s very efficient at exiting the defensive zone with control of the puck, and he actually has one of the lowest turnover rates in the entire league according to Sportlogiq tracking data.

Fowler clearly has a lot to offer, yet there’s only so much he can do in regards to his own limitations. It’s up to Bruce Boudreau and his staff to recognize that and act upon it. The Fowler-Bieksa pairing simply hasn’t worked out, and with the playoffs on the horizon, it would be wise to get Fowler with someone else as soon as possible.

Korbinian Holzer is an interesting candidate, as he’s posted strong shot attempt differentials throughout much of the season and could help mitigate Fowler’s defensive shortcomings. If Boudreau wants to give this team the best possible shot at a Stanley Cup, then it’s time to start utilizing Fowler’s elite talents properly.