By comparison, NHL revenues for the 2017-18 season are estimated to have totaled $4.54 billion. The broadcast rights with Rogers and NBC contributed $636 million, or 14 percent to that total, while sponsorship deals made up 12.3 percent of the total at $559.5 million. Revenues from game-day ticket sales, concessions and merchandise sales were $3.34 billion, or a whopping 73.7 percent of total revenues. 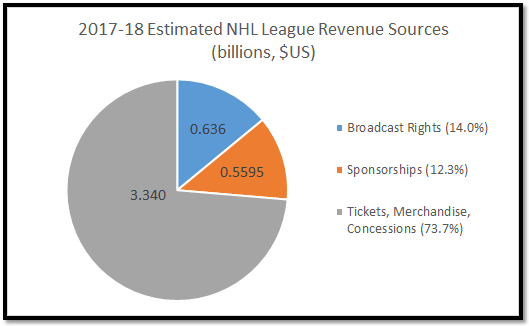 Given the NHL’s dependence on ticket sales, individual teams have looked for new sources of ticket revenue to improve their bottom lines. Their answer in recent years has been a concept called dynamic pricing or what some businesses call price optimization. Sources suggest that American Airlines was the first major company to adopt the practice in the 1980s. They used the concept to manage their ticket sales revenue with the seat pricing mostly based on seat supply and consumer demand.

Sound familiar? We all know that airline seats attract different prices, with airfares highly dependent upon the number of seats available for a scheduled flight and how far in the future the flight departs. The same factors affect ticket prices at NHL games with the popularity of the visiting team now being a critical factor in the ticket pricing strategy.

These “street sellers” were better known as scalpers and dominated the secondary market outside the arenas in the past. Today ticket brokers like StubHub and Ticketmaster dominate the secondary market and help to provide a new source of revenues for NHL teams and a secure platform for fans to purchase tickets.

Dynamic pricing emerged as a strategy by professional sports teams to capture the market dominated by the scalpers and increase ticket revenues by capturing their profits. NHL teams are following the policy of withholding tickets in advance of specific games and allowing more fans to purchase seats before game time online or at the gate.

According to Nufer and Fisher, rather than setting prices for specific sections and seats at the beginning of the season, a dynamic pricing system “…constantly adjust(s) (prices) to variables such as the winning record of the home team, the attractiveness of the opponent, days left until game day, and even the weather forecast.” The system captures the true market-based value of a ticket because it takes into account the variables that affect the demand by fans who choose to attend a particular game.

Not surprisingly, Toronto Maple Leafs home games dominate the top-10 list for secondary ticket market prices, especially when the visiting team is the Montreal Canadiens or Pittsburgh Penguins (the Sidney Crosby factor). Secondary market ticket prices are on average in the $400 US range for the Penguins games and run as high as $581 US for the Habs. Average secondary market ticket prices for Colorado Avalanche home games range between $425 and $457 US, with the Chicago Blackhawks being the most popular visiting team in Denver. 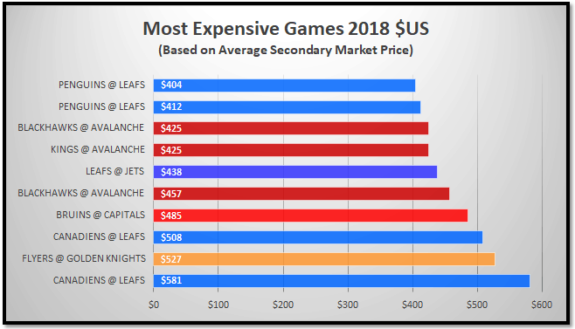 The list of average secondary market ticket price increases this season is led by the Avalanche with a price increase of 42 percent over last season. The significant increase may have something to do with the fact that Colorado is currently in the hunt for a playoff berth and they have two exciting players in Nathan MacKinnon and Mikko Rantanen that now sit among the top-four NHL scoring leaders.

To test the demand and supply metrics for the dynamic pricing model, I looked forward in the league calendar to upcoming home games in both Montreal and Toronto. On Feb. 9, the Canadiens play host to the Leafs. A ticket for a Red Centre Section 113 seat lists at $575 US on StubHub. By comparison, when the Arizona Coyotes are in town on Jan. 23, a seat in the same section goes for $135 US.

On Feb. 23 Toronto hosts the Canadiens at Scotiabank Centre. A Lower Centre Section 119 seat is available for $750 US on StubHub while a game against the Coyotes on Jan. 20 sells for $291 US in the same section. Dynamic pricing at its finest.

It appears that the days of the ticket scalper are behind us. Technology and forecasting are playing an important role in dynamic pricing practices. NHL teams, and their secondary market ticket sales partners, are using sophisticated pricing software that helps organizations accurately set and adjust ticket prices in real-time based on past price performance, current sales levels and future sales projections. The ability to compile and analyze this sales data allows teams to withhold blocks of tickets for high-demand games that fans would be willing to “pay up” for, therefore resulting in increased ticket sales revenues.

To quote Warren Buffet, “Price is what you pay, value is what you get.” Many NHL fans see the value in “paying up” to see the best and most popular teams and players in the league, and they are willing to pay for expensive tickets to do so. Dynamic pricing provides that opportunity.