The Vancouver Canucks entered last Tuesday night’s game against the Colorado Avalanche with an 8-4 record and holding down second spot in the tough Pacific Division. Their spot near the top of the Western Conference no doubt had to come as a shock to most fans of the team considering the way the team finished out last season under the stewardship of since fired head coach, John Tortorella.

However, as the week began for the Canucks they were staring in the face their toughest test of the early NHL season. Now it is hard to call many road trips, or games as season defining moments so early in the season, but for the Canucks the four-game road trip that they just completed was definitely one of them.

The four-game trip saw Vancouver visit Denver where just a few weeks before the young legs of the Avalanche skated circles around the Canucks on route to a 7-3 rout of the visiting team. The Canucks team speed was and continues to be a question mark during this season, and a return trip to Denver so soon really tested the Canucks ability to keep up with one of the quicker teams in the conference. The trip then ended with a three game swing through the Canucks own personal house of horrors, the state of California.

So, for all the talk of the early success, and the impact of head coach Willie Desjardins’ new system in Vancouver this year, there was some cause for skepticism heading into this crucial early season road trip.

Canucks outplayed, but come away with points

The final results from the trip, a 3-1 record, including a win in a shootout, something that has plagued the team in years past, will be seen as highly successful, the end results from each game were mixed.

The first game of the trip saw the Canucks surrender the lead early to Colorado. In fact, Vancouver was trailing 2-0 for almost 40 minutes, and it looked like another Avalanche run away was underway. However, a late second period goal from the Sedin line, and a dominant third period saw the Canucks avenge their early defeat and kick off the crucial trip on the right note with a 5-2 win.

The second and third games of the road trip were eerily similar to last year for Canuck fans, however. Despite coming away with a 3-2 victory against San Jose, the team was horribly outplayed. If not for the goaltending of $18 million-man, Ryan Miller, Vancouver would no doubt have lost, and lost huge. The first five minutes of the game alone saw Miller make four or five outstanding saves to keep his team in the game. The Canucks ended out being badly outshot, and at the game’s end the Sharks had attempted a total of 74 shots and got 36 of them through to Miller, while Vancouver only managed 23 shot attempts, getting 19 through to Sharks goalie Antti Niemi.

It was more of the same against the Kings, however this time Miller was unable to save the day. Vancouver looked exactly like they did last year when they played Los Angeles, completely outclassed. Miller was pulled for the second time this season after allowing four goals on 22 shots, although he wasn’t blamed for the loss by his coach after the game, who didn’t mince words after the game saying his team just wasn’t good enough.

With the loss to the Kings still fresh in the minds of the players, the team took to the ice Sunday night, for the third set of back-to-back games this season. Up to that point on Sunday the Canucks had been dreadful on the second half of the back-to-backs, losing to Tampa Bay and Nashville respectively. To make matters worse Vancouver was playing the team that gave them the most trouble last season, the Anaheim Ducks.

From puck drop it looked like the problems that plagued the Canucks in all their losses this season would come to fruition again. Vancouver was outplayed in the first period, getting outshot, outskated as well as dominated in the faceoff circle. Backup goaltender, Eddie Lack played very soundly to keep the game even, but was eventually beaten early in the second period by Sami Vatenen on a Ducks powerplay. From that point on, however Vancouver seemed to come alive. Alex Burrows would tie the hockey game, and the game would go to a shootout where former Duck, Nick Bonino would score the shootout winner, as Vancouver escaped with a win and six of a possible eight points on the swing.

Canucks still have a ways to go

While the team has to feel good about the 3-1 record on the road trip, the play in general has to be a concern. This trip could have easily been a disaster for the Canucks, if not for a strong third period in Denver and a lights-out performance from Ryan Miller in San Jose. The problems the Canucks had last season against the three California teams remain evident. Vancouver struggles with the size up front of the Kings and Sharks, and has trouble dealing with the speed of the three California teams.

While the game against the Ducks saw Vancouver battle hard and get the win, especially with key players, such as Radim Vrbata out of the lineup, Anaheim was missing arguably their best player in Corey Perry, as well as top defencemen, Francois Beauchemin and Cam Fowler. Perry’s absence was especially crucial to the Ducks, as he dominated Vancouver last season with his size and strength down low. 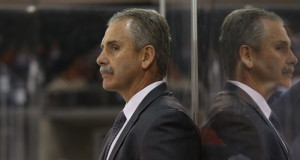 The Canucks can take solace in the fact that they took two of three in California and sit a point back of the Ducks for the lead in the Western Conference, but must realize that this trip further exposed already evident flaws in their game.

For Vancouver to keep pace they will need to shore up down low in their own zone, and improve on their faceoffs. If not the state of California will continue to haunt this team.