EDMONTON — Leon Draisaitl scored twice and added an assist and Connor McDavid had a goal and three assists as the Edmonton Oilers won their second game in a row with a 7-2 victory over the Minnesota Wild on Friday.

Ryan Nugent-Hopkins, Zack Kassian, Alex Chiasson and Darnell Nurse also scored for the Oilers (15-12-2), who have won five of their last six games.

Marcus Foligno and Nino Niederreiter replied for the Wild (15-12-2), who have lost five of their last six. 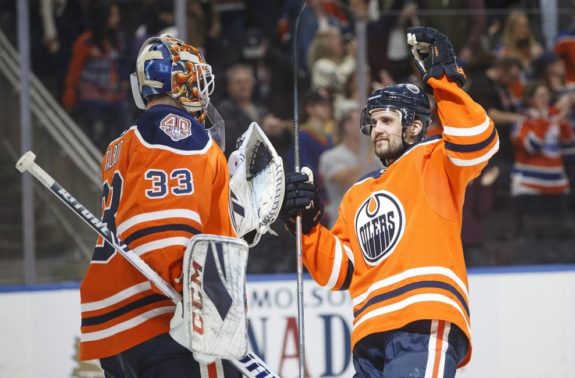 Edmonton got on the board with just its second shot, four minutes into the game when McDavid fed it across to Draisaitl and he made no mistake in depositing his 14th goal of the season past Dubnyk.

The Oilers made it 2-0 four minutes later when Dubnyk couldn’t corral a bouncing puck and Nugent-Hopkins slipped it past the Wild goalie.

Edmonton scored its third goal on six shots less than a minute later when McDavid scored his 15th of the season, prompting the Wild to replace Dubnyk with Stalock.

Minnesota got on the board just past the midway mark of the first period when Foligno got a screened shot past Talbot.

After a scoreless second period, Edmonton regained a three-goal edge on a long distance shot by Kassian.

The Wild got a goal back when Niederreiter tipped a puck past Talbot at 7:32 in the final frame.

The Oilers made it 5-2 midway through the third when McDavid set up Draisaitl for his second goal of the game.

Edmonton padded its lead with six minutes left when Chiasson picked the top corner for his 12th of the season and got its seventh goal from Nurse a few minutes later.

The Oilers play host to the Calgary Flames on Sunday, while the Wild are off until Tuesday when they return home to face Montreal.

Notes: Wild captain Mikko Koivu was unable to play after taking a knee-on-knee hit from Mark Giordano in their game Thursday against the Calgary Flames… Minnesota forward Zach Parise played his 900th NHL game… Forward Valentin Zykov made his debut for the Oilers after claimed off waivers from the Carolina Hurricanes last week, then having to wait for visa issues to be resolved.