What Can Fans Expect to See From the Washington Capitals in the EPIX Series?

On January 1, 2011, the Capitals marched up to Pittsburgh and defeated the Pittsburgh Penguins 3-1 at Heinz Field in the Winter Classic.  It was one of the most memorable outdoor games in hockey history.  It was a cool night, with a light drizzle, and it was under the lights (in prime time).

The conditions and setting will be different in Washington D.C. when the Capitals host the Winter Classic.  The thing that will not be different is the unlimited access and behind the scenes look at the road to this event.

For the 2015 NHL Winter Classic, the NHL has partnered with EPIX to provide a behind-the-scenes look at the buildup to the outdoor game.  Cameras will venture into the Capitals and Blackhawks locker rooms and fans will get to experience the players and coaches up close. 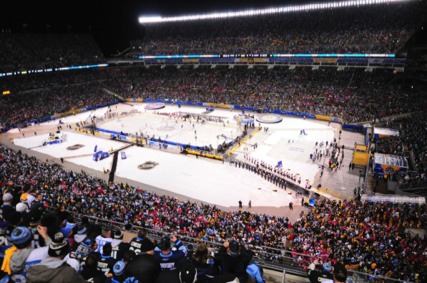 -I am curious to see how Barry Trotz is with the cameras present.  I do not believe he will be as animated as Bruce Boudreau was, but I could see Trotz show some anger during intermissions and behind the bench during game play.

-Characters: Alex Ovechkin should lead the way from a pure entertainment perspective.  He has a very charismatic personality and seems to enjoy the cameras.  Which other players will shine in front of the EPIX cameras for the Capitals?  Could we expect some funny stuff from Nicklas Backstrom or Braden Holtby?  How will the younger Capitals like Tom Wilson and Andre Burakovsky interact with the camera?

-Rink Preparation: this is something that is fun to see unfold with the cameras.  It is remarkable to see the hockey rink get built in the middle of a large stadium and all the hard work that goes into doing it.  Any hockey fan should appreciate these segments and all the people who help make this yearly event possible.

-Road Warriors: the Washington Capitals will spend a bulk of December on the road.  There will be stops in Pittsburgh and in New York along the way. Capitals fans will get to see some of the best teams in the Eastern Conference highlighted in this show.

I always look forward to the unlimited access and behind-the-scenes coverage of these outdoor hockey games.  Most hockey fans are unaware and do not get to see what happens behind-the-scenes.  I feel that it is something that helps grow the game of hockey in a positive way.

HBO always did a fantastic job when they partnered with the NHL in covering the outdoor events and they certainly set the bar high.  I hope EPIX can continue this trend of providing great hockey coverage for one of the NHL’s biggest games of the year.

The Washington Capitals will be a good host to the NHL Winter Classic and should provide some memorable moments when the cameras follow them around for the next couple of weeks.   The NHL Winter Classic will be here before anyone can blink and it will be an exciting game that should live up to its hype and buildup.

I am from Virginia. I am covering the Washington Capitals for The Hockey Writers. I love to write and I am a huge sports fanatic – especially hockey. Follow me on Twitter: @Canucksfin56