Behind the Moves: NHL General Managers Tell How Winners Are Built 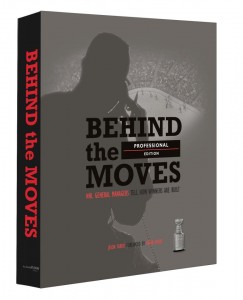 Simply – wow! I was admittedly a little apprehensive when I discovered the book, found that it was only available through the website, and not through conventional means such as Chapters/Amazon. However, upon receiving it one quickly realizes this book vastly exceeds the design and quality of your typical bookstore book. Behind the Moves is in a word – elegant.

My particular edition was tailored to the city I’m based in – featuring the Calgary Flames Stanley Cup ring subtly on the cover and highlighting then GM Cliff Fletcher’s name subtly but effectively on the back of the book. It is also signed by Cliff Fletcher. There are actually twelve unique versions of the book.

I was immediately enthralled.

Revealing quotes, from some of the greatest general managers the NHL has seen, are brilliantly organized.

Upon first delving into the book I was admittedly a little disappointed to read that the author stated analysis was going to be left out of the book, focusing on direct quotes from the tremendous number of GMs and hockey personnel he interviewed. But now I get the concept. It is extremely well put together and the final product is outstanding. Farris amazingly accomplishes what he sets out to do – elegantly let the greatest of the GMs tell you what is behind the moves. No small feat.

I was enamoured with the quotes Farris was able to obtain. He was evidently able to eloquently interview, discuss and converse with the GMs and hockey personnel he was able to talk to for this project.

Let ‘Burkie’ and the other GMs take you into the GM war-room where teams are architected, put you on the cell phone to trade shots with a fellow GM and negotiate the fate of a player on deadline day, or march you into the dressing room to address the team at a critical juncture in the season when they need to be pushed to greatness.

All hockey eyes are on each and every NHL GM. The fickle fans and merciless media, teammates and opposing players, are all watching the GM; watching and evaluating whether he has the heart, the mind, and the drive to become one of …

Behind the Moves is a 252 page coffee-table book rich with hockey imagery, stories of wheeling and dealing, and the raw experiences of NHL GMs who built winners. The book honors these legendary GMs, provides a complete statistical ranking of their achievements, chronicles the evolution of their profession, and charts the inter-relationships between them – be they those who emerged from the older “Sam Pollock” or “Lynn Patrick” schools or from the more recent “Glen Sather” or “Pat Quinn” schools, to name just a few of the prominent epicenters of NHL executive development. The book features a foreword by Toronto Maple Leafs GM Brian Burke and thereafter provides equal weight to the recollections, philosophies, and insights of the other GMs who’ve taken their team to the Stanley Cup Finals since the NHL assumed control of the Stanley Cup in 1926.

I would still like to see a follow up edition featuring commentary and in depth analysis on what was presented in Behind the Moves. Farris has the body of knowledge and the rare ability to effectively do just that.

Secondly, although there had to limits placed on who the author would feature, I would also like to see some of the extraordinary GMs covered in the future who didn’t make the Stanley Cup finals. The benchmark for success is getting to (and hopefully winning) the Stanley Cup. There are GMs of the past and present, however (and this alluded to in the book), that were brilliant hockey minds, but had insurmountable obstacles in their way. One can learn potentially as much from these personalities. As well, there is the rare GM that has been fortunate enough to get to the Cup finals with the rest of their body of work less than stellar. To his credit, Farris did an exceptional feature on current Nashville Predators GM David Poile, one of the most underrated and effective managers in the sport.

How to get yours:

For more information on the author and the book, as well as how to purchase your copy, go to the website:

This book is like a masters class on the inner workings of the life of a general manager.

Heading into reading this one, Stephen Brunt’s “Searching for Bobby Orr” was my favourite hockey book of all time. Brunt now finally has a contender. For the story and the writing, Brunt still comes out on top. For true inside hockey insight into one of the most fascinating positions in all of sports and everything else (design, organization, elegance, quality of product, etc.), Behind The Moves knows no known competitors!

Behind The Moves serves as an excellent resource as one will want to utilize it for future reference to rediscover the abundance of hockey gems contained within.

Hockey fans, hockey writers, those working in the game, and even non-hockey fans should all read this well researched, well organized unique book. It is truly a one of a kind that you grants you an insider’s view of the general manager position. What hockey fan hasn’t fantasized about holding down such a position? 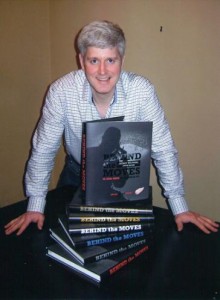 Here’s the official page from the Dallas Stars site: Link


Jason Farris joins the Stars after having held executive positions in a variety of industries: financial  services, software, publishing and online media. Most recently Farris was President and CEO of  Citizens  Bank of Canada, one of 21 Schedule I banks in Canada. Earlier in his career he served as Vice  President  of  Services and then as Vice President of Marketing for Fincentric, a supplier of core  banking software  to  banks around the world.

Along the way, Farris founded circaNow Media which published four hockey books authored by Farris including Hail Cesare! with former NHL goalie Cesare Maniago (the only goalie in Stars franchise history to backstop all of the team’s wins in a season, albeit when the Stars played in Minnesota) and his current book involving many of the NHL’s general managers titled, Behind the Moves.

Brian Burke, a.k.a “Burkie” and incumbent Toronto Maple Leafs GM, wrote the forward and provides plenty of unfiltered insight throughout the book from his very unique perspective. Love him or hate him there’s not too many like him when he decides to utilize the 72 muscles in the body used for speaking.

2 thoughts on “Essential Hockey Read: Behind The Moves”