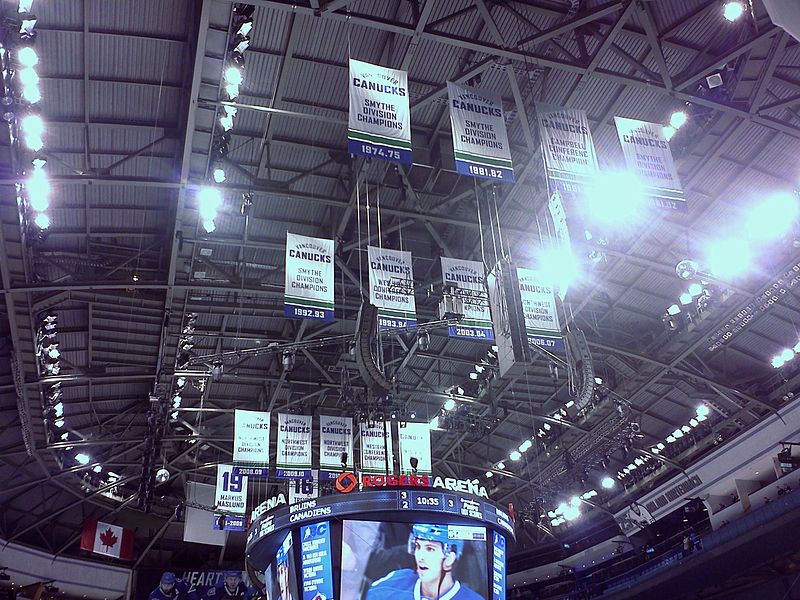 Long dismissed by the holy houses of the great Canadian hockey cities, the city of Vancouver bows to no one in its history, heartbreaking or otherwise.

The Vancouver Canucks lost seven consecutive games heading into the Sochi break. Canucks fans would not be looked down upon for pining for better days. While the high priests of Montreal and Toronto might scoff at the thought of their western cousins having any hockey memories to be proud of, Vancouver has been carving themselves into history for long enough to keep their heads up.  Even now.

In the spring of 1915, the Stanley Cup was awarded, for the first and last time, to a professional ice hockey team from the city of Vancouver.  The name must have seemed audacious at the time. There was something like eight total millionaires on the planet in 1915. It would be akin to naming an expansion team the Seattle Quadrillionaires. The Hamilton Illuminati. The Las Vegas Corporate Space Oligarchs. Yet on that night in Vancouver’s ill-fated Denman Arena1 a team in maroon, led by a man whose first name was Cyclone, hoisted the flower pot version of Lord Stanley’s punch bowl.

The Rise Of The Creamery King

Frank Patrick, the man who invented the blue line, the penalty shot, and the entire concept of raising one’s stick in the air after scoring a goal, was the man behind the wheel. Recently a star defensemen for the Renfrew Creamery Kings of the tiny mining town of Renfrew, Ontario, Frank wanted more for himself. When he founded his new team in his new league2, he didn’t just want to be behind the wheel.  He was owner, president, manager, coach and defensemen. He built the engine, washed the windows and drilled the oil out of the earth himself. He also called shotgun.

This would be akin to finding Francesco Aquilini sitting at the end of the bench in goalie pads.

While Frank’s older brother moved onto New York to coach the Rangers to two cups and another as a general manager, Frank lingered. Eventually he died of a heart attack in Vancouver, exactly four weeks after Lester passed.3 In time, even his proud Millionaires would become Maroons, and then eventually cease to exist altogether. But still, because Frank had a sense of history, you will find his name and the names of the 1915 Millionaires engraved on the cup. This was 9 years before it was standard to script names onto the cup, even though teams before the Millionaires did so on their own. One can imagine Frank not wanting to risk his name being written over or in some way smudged on the exterior of the cup. So he had he and his teammates names engraved on the inside of the upper bowl. As if some scrappy little bastard had snuck into a church and scribbled his name in chalk on the ceiling. Frank Patrick’s heart was set to explode. The Cup would outlast them all.

Return Of The Lusty Fellows

The word ‘canuck’ is now known well as a colloquial term for Canadians themselves. It is a statement of identity. A matter of place that is not entirely uncommon.  Far to her east sat the high holy house of Montreal, current cup champions, and set to open a decade in which they would win six of the ten cups to be handed out. They were identifiers too. The Canadiens, with their beautiful words and endless hockey riches, stood as giants when the Canucks stepped into the light. The oldest story goes that the word “Canuck” was first heard uttered self-referentially by a “lusty fellow in a forest road with a keg of whisky slung round him” in the 18th century. While it may lack the patina of the high-horsed Les Canadiens, it tasted of the earth. Of forest and stone. Of the west.

It also appeared at first as if they had gotten their players from the same place they got their name. As if they had pulled their wingers out of a tree somewhere. Found a goalie under a bridge. The 1970 expansion draft was a bad joke that the Canucks ownership didn’t get. A hurriedly arranged group of grinders and garbage men were thrown blue jerseys with a half of a hockey stick on them and pointed towards the ice.

The NHL’s East Division at the time was composed of five of the Original Six. They were kept together after the first expansion to preserve competitive balance with the new, far less robust rosters of the ‘Next Six’ teams from the Western Division. By the time the Canucks and Sabres joined the NHL, the league had moved the Blackhawks west, where they were comically demolishing the ill-qualified expansion teams nightly. The league decided to place the infant franchises from Buffalo and Vancouver in the East. If not for the Red Wings collapsing under the weight of Gordie Howe’s final year in red, in concert with having to live under the iron fisted reign of a new coach who wouldn’t let them drink and smoke, the Sabres and Canucks would have been racing each other into the division basement like twin zambonis thrown off the Shangri-La.

Things went along this way for some time. Oft interminable mediocrity interspersed with brief, vicious decapitations in opening playoff rounds. By the time 1978 arrived, the Canucks had won a single playoff game in eight seasons as a franchise. Change was coming4.

“The robbed that smiles, steals something from the thief”  ~William Shakespeare

With the 40th pick of the 1978 Draft the Canucks selected Stanley Philip Smyl. A local hero who won multiple Memorial Cups in suburban Vancouver with a team that basically punched their way to championships, Smyl was a perfect fit.

Pronounced smeel5, Stanley would go on to epitomize the undersized winger soaring around the ice like a man being chased by a pack of invisible ice-tigers. In his own end he was a scrappy, desperate defensive stalwart that would javelin his 5’8 frame into anyone in the wrong color shirt. They called him Steamer, but he played more like fire truck with its brakes cut.

Smyl would go on to be the longest serving captain in Canuck’s history and the first jersey to be retired by the franchise. In his first shift of his rookie training camp he checked a teammate directly through the glass. From his debut game forward, the Canucks qualified for 14 of 18 playoffs, reaching the cup finals twice. In 1982, Smyl led the Canucks through the playoffs like a marauding band of black and orange ninjas. They tore into the finals by winning 11 of 13 games over the Flames, Kings, and Blackhawks, only to find themselves in the path of the monstrous early 80’s Islanders, who promptly swept the Canucks aside in route to their third of four consecutive cups. The Islanders clinched that cup in Vancouver, kissed and danced with it on the Canuck’s ice.

It is of course so often the case that great leaders, the screaming chiefs of their tribes often close their days without the greatest prize. Perhaps it was even crueler still for this particular man. A man named Stanley, with no cup.

Three years after Smyl hung up the blade boots, the Linden and Bure Canucks vanquished longtime rivals and big brothers in the east, the Maple Leafs in five games to reach the finals again. There they met the Rangers in one of the more memorable finals in decades. But again, history would not favor the men in black. Nor would it three years ago, in another seven game final, which they squandered two chances to clinch and lost to the Boston Bruins. For the second time, the Canucks fans would get a glimpse of Lord Stanley’s Cup as someone else’s team sailed it around their home rink.

Loss is at the very center of what the sports fan is hewn from. Vancouver is like many cities, and many sports. For every Yankee there is a Royal. For every Steeler there is a Brown. And for every Canadien, there is a Canuck. Often, the cities and fans that find themselves most tortured are from cities that felt that way long before someone slapped a puck around a pond. The great metropolises adore this narrative. That each of them is Rome. That they are a string of cosmopolitan pearls worn around the neck of the hemisphere. That everyone else wants to live where they do. As if Vancouver, Olympic host site and its vast, sophisticated, modern urban landscape is somehow beneath the “originals”. It is just the opposite of this maxim that gave us a second city at all. It is the drive to get away. To make new. To go west.  It is the push outwards that makes the third fourth and fifth cities all the more special. And in this seemingly more civilized era, we do not pillage and raid our rivals. We pay a few strangers handsomely to whip around an ice cube and settle the scores for us. For the cities that do not need to be called a capital, there is still a desperate desire to forge a history. A way to find their own place in the litany of these invented frozen monarchs. For Canucks fans, there has been more than enough heartbreak .  And too often we mistake that for a lack of history. How silly that is.

This city, and its team need no historical revision. It requires no generous edit to the textbooks. The Canadiens haven’t played for a cup in two decades. The Leafs, four. Six teams have never been to the final.  They are overwhelmingly the best Canadian NHL team of the last twenty years. And even without all that, Vancouver does not need any charity from the hockey gods. It had it’s mettle cast nearly a century ago, when a special young man won his prize, and rather than risk time forgetting him and his millionaires, had their names engraved on the inside of the cup itself. So that every future champion would taste his name in each swallow of champagne. So while his bigger brother out east would be most beloved, the men from the west would be sure that history would have them on their lips as long as men took to the ice at all.  So that the grandest champions would have to remember their names. Would have to remember that for every Canadian, there is a Canuck.

1 The Denman Arena burned to the ground in 1936, taking with it every existing Vancouver Maroons sweater.

2 The Pacific Coast Hockey League, the first successful foray for professional hockey in the region. Lester Patrick founded and ran the Victoria Aristocrats. Frank, the Vancouver Millionaires. A humble bunch those two.

3 Lester was dying of cancer, but actually passed due to a heart attack, just as his brother did.

4 Not the least of which were those slick black and orange jerseys.

5 I’d like to formally propose from this day forward we refer to any toothless hockey player’s smile as a smeel.

M.A Dillon is a former professor at NYU’s Gallatin School of Individualized Study and a staff writer for The HockeyWriters.com covering the Vancouver Canucks.