Fan frustration has set in. The fans of the Carolina Hurricanes are not seeing marked improvement in their team. Changes have been made in the front office and behind the bench, seemingly to no avail. Fans have heard the positive outlook prior to the start of the season morph into lamenting about injuries. The latest lament is much the same as it has been for several seasons – the dreaded, “we just did not start well.”

The fans are showing their frustration by staying home. Recently the media in Raleigh reported on the sagging attendance for ‘Canes games at the PNC Arena. The arena seats 18,680 for ice hockey games. Not bad as arena size goes. This season however, Hurricanes fans have yet to arrive in droves, choosing rather to do something else. The arena has yet to be sold out for a Hurricanes game. It’s really pretty sad.

The fans used to support the team

The following graph from hockeydb.com shows the average attendance for Hurricanes home games going back to the 1997-98 season.

One has to look all the way back to the 2003-04 season to find an average attendance in the 12,000 range. After winning the Stanley Cup in 2006, the fans have been fairly consistent in their support of the team. This season the absence of fans in the PNC Arena is noticeable. The arena has looked nearly half-empty at times. It’s clear that fan frustration has set in, and many are withholding their support in the form of not attending the home games.

Around the NHL, attendance is pretty good

A comparison to the attendance of the other teams in the league shows the ‘Canes to be next to last, only above the Florida Panthers in attendance so far this season. This chart from espn.com tells the tale:

The San Jose Sharks, New Jersey Devils, and Carolina Hurricanes have each only played eight games at home so far this season. The Sharks are averaging an attendance of 17,449 at the SAP Center. The Devils are drawing 14,644 to the Prudential Center. Not significantly more than the Hurricanes’ 12,404, but still better. What is noteworthy is that San Jose has not historically been the center of the hockey universe. But they have made the playoffs over the past few seasons, and the team has earned the support of its fans.

The Florida Panthers have not been awful this season, yet are struggling to attract a crowd to the BB&T Center. This has prompted talk of either the team being moved or sold. Both ideas have been dismissed  by team co-owner, who is hoping for a bailout in the form of tax relief from Florida’s Broward County. As reported in the Miami-Herald,

“Though Cifu is adamant about not moving the team, he declined to comment when asked whether he and Viola might sell the team — potentially to an owner who would relocate — if the commission rejects the bailout. Cifu said he has not been contacted by anyone who wants to relocate the team.”

This sounds somewhat familiar to talk that made the rounds recently in the media concerning the Hurricanes.

The principal owner of the Carolina Hurricanes is Peter Karmanos

A few weeks ago, Karmanos announced that he was willing to sell part of the Carolina Hurricanes. He said he would like to receive $420 million for the team. At the time I wrote about Karmanos’ talk of selling, Forbes had valued the team at $195 million. Just this week, the business publication issued its latest valuations of NHL teams, and the Hurricanes came in at $220 million. Noted in the valuation was that

With the down attendance this season continuing to reflect the very obvious fan frustration in Raleigh, Karmanos’ may have to set his sights a little lower to attract a buyer. The PNC Arena does have a “no move” clause with the team, so it is unlikely that a sale would equal an imminent relocation. However the fans need to get behind their team this season, and demonstrate that Raleigh is still  a viable location for NHL hockey.

The reason for fan frustration is simple

The team not winning on a consistent basis might be the obvious first thought to justify the frustration of Hurricanes fans. But, I think it is something else. It is the seemingly endless refrain of “we came out cold” or “we didn’t start well” that fans have endured over the past few seasons. It’s simple really: If the team is not up and excited about playing, how can the fans be expected to be up and excited about watching? 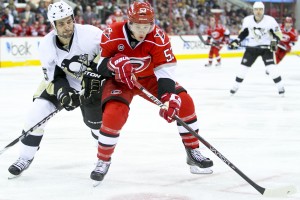 I know it can be the “chicken and the egg” thing when trying to figure out if fan support gives a team the added spark that they need, or if lackluster effort is a by-product of fan frustration. It can be a vicious circle, but it ultimately falls on the team and its individual players to correct their funk or lack of effort or whatever it is that is causing them to start haphazardly and without energy.
Coach Bill Peters can encourage, withhold ice time, and use a host of other techniques to motivate the Hurricanes, but in the end, the players are the ones who need to check themselves and develop mental toughness. Captain of the ‘Canes, Eric Staal can and should be a big help in silencing the refrain of “we started slow.” The players are practicing well and working hard. They need to know that their team and its leaders are expecting their 100% effort at all times. They are, after all, professional athletes.
#459342822 / gettyimages.com
A Hurricanes fan sent me a text this morning saying that Staal needs to demand accountability from his teammates, especially Alexander Semin. I agree wholeheartedly. It’s beyond time for the Carolina Hurricanes to move beyond the mysteries of the slow start. It’s time to give the fans in Carolina a reason to abandon their fan frustration, and start putting a product on the ice that can be supported. This begins not entirely by winning, but by showing the fans that they are bringing their best effort every time they hit the ice. That is something ‘Canes fans will appreciate and support.