Luongo, who returned to the lineup after missing five games with a knee injury, passed Ed Belfour and Tony Esposito for sole possession of ninth place on the NHL’s all-time shutout list.

Jaroslav Halak stopped 39 shots as the Panthers had a season-high 44 shots on goal. The Bruins lost for the third time in four games. 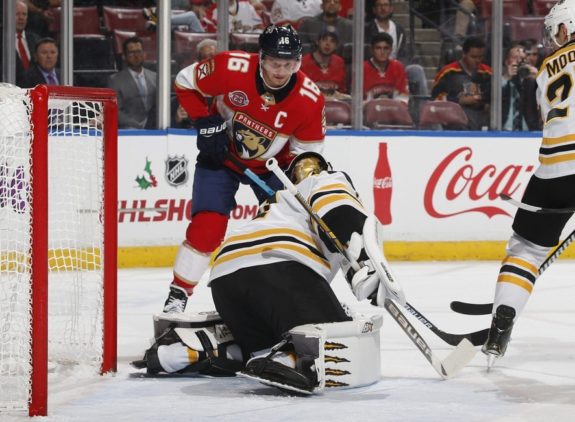 Huberdeau stretched the Panthers’ lead to 3-0. His shot from the left circle was blocked by Halak, but the puck trickled through his pads at 15:14 of the second period. Huberdeau has six consecutive multipoint games, one short of the franchise record set by Pavel Bure.

Hoffman’s second goal with five seconds left in the second on a power play made the score 4-0. Hoffman has 26 points in his last 24 games.

Dadonov’s power-play goal with 5:34 remaining in the third made it 5-0.

Hoffman scored the first goal of the night. With traffic in front, Halak lost track of the puck, which was sitting on his left side at the goal line until Hoffman poked it in at 4:21 of the second.

Matheson gave the Panthers a 2-0 lead when he brought the puck down the length of the ice and beat Halak on the stick side with a shot from the right circle at 13:13.

NOTES: The Panthers returned goaltender Michael Hutchinson to Springfield of the AHL. Hutchinson was on loan while Luongo was out. … Huberdeau has 299 points, surpassing Nathan Horton for fourth in franchise history. … Bruins D Charlie McAvoy took part in the morning skate. McAvoy is not expected to play Thursday at Tampa Bay, but it hasn’t been ruled out.

Bruins: At the Tampa Bay Lightning on Thursday.