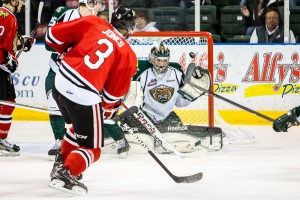 The 2013 NHL Draft is just five days away and with rumors swirling that the Colorado Avalanche would draft Nathan MacKinnon with the No. 1 overall pick, the Florida Panthers should start diverting most of their focus to the draft’s top prospect, Seth Jones.

Rumors came to surface Monday on NHL.com when Joe Sakic said of MacKinnon, “I think if we had to do it today, right now, he would probably be the guy, yes.” He quickly added, “But we still have some time.”

Avalanche coach Patrick Roy responded with a similar statement in an ESPN.com interview Monday, saying, “It would be tough for us not to take MacKinnon. MacKinnon is ready to play tomorrow.”

The Avalanche organization is very well aware that teams picking in the top-10 of the upcoming draft are starving more for a center who can contribute immediately as opposed to a highly touted defensive prospect with a blistering one-timer.

But Jones is much more than just a quick slap shot. He skates extremely well, can log big minutes, is not easily intimidated, and is the franchise blue-liner that any team should be looking for. His right handed shot is just another plus. When you look at young defensemen with right handed shots that have made quick impacts in the NHL, you can recall Boston’s Dougie Hamilton and Minnesota’s Jonas Brodin. Jones has a huge leg up on both of these guys.

A quick right-handed shot is a rare commodity to come by in the NHL, so the Panthers wouldn’t be settling for Jones with the No. 2 pick in the draft. They would actually be taking home a huge prize.

Now there’s also the chance that Colorado is just trying to use a scare tactic to get a team in the top-10 to trade up to get MacKinnon. It seems right now that the Avs need a blue-line presence like Jones more than a center such as MacKinnon.  While their blue line is weak, they really only have two solid centers on their roster in Matt Duchene and Paul Statsny, who by the way, is not getting any younger.

The Pittsburgh Penguins drafted center Evgeni Malkin with the No. 2 pick in the 2004 NHL Draft. A year later, they proceeded to take another center, Sidney Crosby, with the No. 1 pick. That strategy doesn’t appear to be hurting the Penguins one bit.

The center position as of now looks anything but attractive for Florida. Down the lines, they have Peter Mueller, Stephen Weiss (who is likely to walk in free agency), Shawn Mathias, Marcel Goc, and prospect Nick Bjugstad. Yes, the Panthers need MacKinnon more than they need Jones, but it’s not worth giving up a whole lot to draft him when they can easily get a guy with equal value in Jones.

Like MacKinnon, Jones can step in right away and make a huge impact. He has the potential to be a Duncan Keith, Drew Doughty, Mike Green, Kris Letang, or Erik Karlsson type player. Last time I checked, that hasn’t worked out negatively for any of their respective clubs.