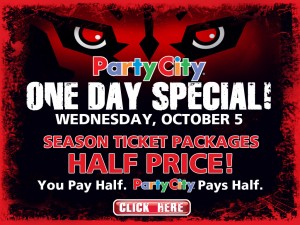 Historically, the Florida Panthers have drawn poorly at their home in Sunrise, Florida. Over the last three seasons, the organization ranks 23rd out of 30 teams in average attendance per game. Predictably, that comes in three seasons in which the Panthers have missed the playoffs and have seen their points decrease in each season.  Thus, the team’s brass has taken drastic measures to bring fans to the BankAtlantic Center for the upcoming campaign, its nineteenth in South Florida.

Visit the Florida Panthers homepage, and you are immediately greeted by a bright red landing page in theme with the team’s 2011-2012 marketing campaign, “We See Red.” The page announces the “One Day Special” on Wednesday, October 5 when season ticket packages will be half price. Thanks to PartyCity, one of the Panthers “pillar partners,” Panthers fans are told “You Pay Half. PartyCity Pays Half.” This is a comprehensive campaign including seats in the lower level, the Lexus Club, and the upper bowl for full season, half season, or mini package plans.

A season ticket discount of this magnitude seems shocking, but it is nothing new for the Panthers. It is a timely move by an organization that received heat earlier in the summer for raising the price of season tickets, and it will have more upside than downside. To begin with the latter, the downsides seem to be the possible unhappiness of fans that have already bought season tickets as well as the perception that the team is selling itself cheaply. Still, it is a struggling team looking to build a fan base, so this is a generally positive move.

For one, the Panthers will surely bring more fans into the arena. The team has invested heavily in new players and a new coaching staff. Drafts have gone well, and the organization is moving in the right direction. If the Panthers can fulfill their promise to improve, fans may be surprised with winning hockey and an exciting game day experience. Happy fans will lead to increased attendance, more money spent on merchandise and concessions, and an increase in the team’s payroll which also ranks towards the bottom of the NHL. A home ice advantage for the players would also be a welcome addition to a sometimes quiet gameday experience.

The deal also grabs attention in a very fickle South Florida sports market where even the NBA’s Miami Heat struggle to get fans into their seats by tip off. The Panthers are experts at creating campaigns that turn heads, which is a positive thing in a region of palm trees and sun rather than icy ponds and snow. Last summer when the Heat’s LeBron James brought his talents to South Beach, the Panthers ran a promotion with the tag “Seats Fit For A King” and sold season tickets for $23 per game in the lower bowl and $6 per game in the upper bowl. Of course, James wore the number 23 for the Cleveland Cavaliers and changed to number 6 when he came to the Heat, so it was a clever campaign by a marketing team that is constantly hustling. The front office knows that creativity and good bargains are a recipe for grabbing the eyes of potential customers.

With radio advertisements in full swing and a healthy buzz about the promotion, it will be interesting to see the results. One thing is for certain, the Panthers will continue spinning their wheels and coming up with ways to attract fans.