Before the season, Philadelphia Flyers General Manager, Ron Hextall, made it clear that he envisions the Flyers as a playoff team. “We expect to be a playoff team (paywall to ESPN Insider),” is what Hextall told ESPN’s Craig Custance in August.

With the additions of Evgeni Medvedev, Michal Neuvirth, and Sam Gagner, Hextall expected the Flyers to be slightly improved at each position. So far, the improvement has been most notable in goal, but has been suspect on both defense and among the forwards.

However, recently the Flyers blue line has become a fairly respectable unit. With solid play from Radko Gudas and Michael Del Zotto, along with the excitement and skill of Shayne Gostisbehere, the Flyers have not had to rely upon Evgeni Medvedev.

In the coming weeks and months, the Flyers can expect Medvedev’s game to continue to improve and they can expect the return of Mark Streit. Streit, who was one of the Flyers only bonafide top four defensemen coming into the season, has missed six weeks of hockey due to a lower body injury. Upon his return, the Flyers blue line should take another step forward.

The Flyers forward core has gone through multiple dry spells this season. However, with the latest shake up of the lines, Hakstol looks to have ignited one of his stars. Hakstol placed Jakub Voracek on a line with Wayne Simmonds and Sean Couturier. The line has only played five games together, but has already performed wonders.

The rest of the Flyers forwards have not been as productive over the past few games, but that should not be too alarming. On a nightly basis, no team will have 12 highly productive forwards. Players will go through slumps and hot streaks. But if Hakstol keeps Voracek and Couturier together, it will present match up nightmares for all of the Flyers opponents.

The Flyers have had some of the best goaltending in the NHL this season. According to war-on-ice.com the Flyers  have been the top NHL team in terms of even strength save percentage. When special teams are factored into their save percentage, they drop to eighth.

Ultimately, the addition of Michal Neuvirth has been fantastic for the Flyers. He has an 8-4-2 record with a .937 save percentage and three shutouts. Steve Mason has been decent, posting a 7-9-5 record with a .912 save percentage and two shutouts. As goaltending goes, the Flyers have been much improved from last year, even as Mason has been unable to duplicate last season’s success.

Over the past five years (not counting the lockout shortened season) it has taken 98, 93, 92, 93, and 88 points to make the playoffs, respectively. Part of the reason that number was so high last season was due to a few historically bad teams like the Buffalo Sabres and the Arizona Coyotes. This season, there are a few bottom feeders, but there are no teams that are quite that bad.

Therefore, it is reasonable to expect a team to need about 94-96 points to make the playoffs. The Flyers currently have 37 points through 35 games. Prorated to a full season, this would amount to 87 points, a slight improvement over last season, but not enough to make the post season.

However, the Flyers have been improving over their past 15-20 games. The chart below gives a rolling graph of how many points the Flyers have earned for every five games of the season. 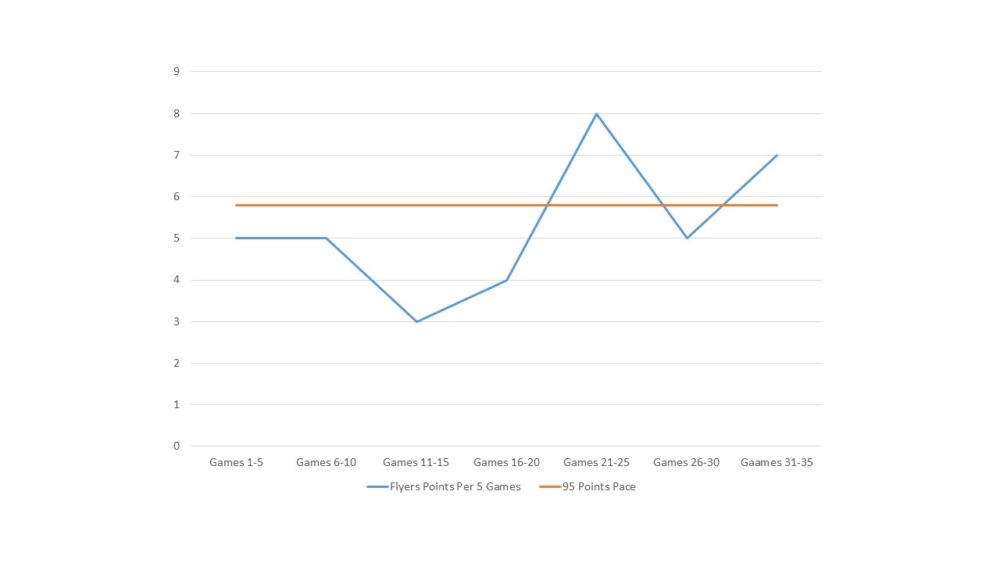 The Flyers are heading in the right direction. If they continue to rack up points at the rate that they have over the past 15 games, they could easily end up in the 97-100 point range.

As it stands now, there are only eight points separating the 3rd and 12th best teams in the Eastern Conference. The Florida Panthers, who were neck and neck with the Flyers just a few weeks ago, have catapulted into first place in the Atlantic Division. On the other hand, the Penguins, who once seemed to be a playoff lock, now find themselves tied with Philadelphia (37pts in 35 games) and on the outside looking in.

Even if the Flyers continue their ascent, they will be in for a dogfight in 2016. The teams ahead of them are, for the most part, playing good hockey while the Flyers are battling an injury to Michael Del Zotto.

The Eastern Conference is crowded in the middle. Even so, the Flyers playoff hopes that once seemed laughable have now become justified.