The onus of the National Hockey League playoffs is to, conceivably, pit the two best teams against one another in the Stanley Cup Final.

This years edition of the Final has yet to take place, but the top two teams are already facing each other in a best of seven series.

The Western Conference Final, which features the Los Angeles Kings and Chicago Blackhawks, has proven that they are the two best teams in hockey and their still on going battle clearly seems like this years actual Final. 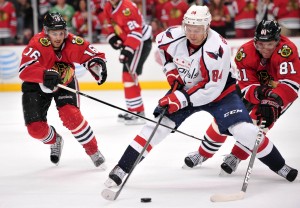 The difference in quality of play in the 2014 Western and Eastern Conference Finals is a microcosm of the regular season disparity between the two conferences.

For instance, four of the top five teams call the West their home, and of all the 14 Western Conference teams, only four, Dallas, Vancouver, Edmonton and Nashville, were below .500 in games played against Eastern Conference opponents. For this fact, I considered shootout and overtime losses as actual defeats, and if I were to just look at the wins and loss columns, only one team, Dallas, was actually below the .500 mark. In that case, yes, even Edmonton had a winning record against Eastern Conference teams.

On the face value of wins and losses, the West’s dominance over the East in the regular season shows that the East is inferior to the West in not just the third round of the playoffs, but also over the NHL landscape as a whole.

Attrition in this sense doesn’t mean losses, but more so the damage one does to their own well being while trying to navigate through a month and a half of playoff hockey in the West.

Gotta think the Canadiens and Rangers are watching and thinking, "Daaaaaamn."

The elevation of play to the point of insanity has been seen, and will be seen again in the final two games of the Western Conference Final. Take in point the Game 5 double overtime thriller. The first overtime period was a blitzkrieg across a frozen plain, where two elite teams with incredible depth traded blow after blow, without ever so much as taking a deep breath.

The amount of players elevating their game has made one thing evidently clear: in order to succeed, a team must have superior depth.

And Carter has now scored 22 goals since the beginning of the 2012 Stanley Cup Playoffs, which is five more than any other player, with Chicago’s Bryan Bickell next at 17 in the same time frame.

This stat from The Toronto Star’s Kevin McGran encapsulates the success of the two most dominant teams in the past three years of the playoffs, with Los Angeles’ star sniper elevating his game and a non household name elevating his.

Jonathan Toews has also played so well and been so important to his club’s success, that he is bashing down the door to the “who is the best player in the world?” argument. Drew Doughty always raises his level of play when the stage gets bigger and Brandon Saad seemingly willed his team to stave off elimination in Game 5.

None of this is to discredit Martin St. Louis, Derek Stepan or Rene Borque’s playoff performance. All three, especially St. Louis, have been integral to their team’s victories.

But the difference in elevation of play between the West and the East shows is that there is a gap in depth between the two conferences. The Kings and Blackhawks have matched up line for line and are putting on a show. When one, or multiple, Kings players steps up, the Blackhawks have the capability to answer.

The Rangers aren’t able to answer either the Kings nor Blackhawks’ elevation of play or depth, therefore Los Angeles and Chicago are the two best teams remaining.

Heading into the Eastern Conference Final, the main storyline was both as easy to identify as it was brought up with anticipation: Carey Price versus Henrik Lundqvist.

They are the two net-minders from the gold medal game in Sochi and are two elite goalies. It was building up to be the Tom Brady versus Peyton Manning of hockey.

And it only lasted two periods. 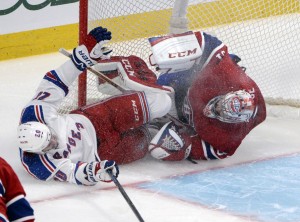 The amount of depth the Kings and Blackhawks offer favourably lends to the Western Conference Final’s ability to conjure up storylines almost every game.

Game 5 it was Brandon Saad’s incredible performance that pushed Patrick Kane’s four assists to the background. Through Los Angeles’ victories it was Jeff Carter’s superstar play and Marion Gaborik making all rental players look like their worth it that grabbed the headlines.

Notice I haven’t mentioned Jonathan Quick, Drew Doughty or either of the coaches yet, all of who can create stories just as well as the other.

With no disrespect to the New York Rangers, the Western Conference Final feels as though the winner of this series will go on to win the Final. It’s too bad that the two best teams played each other in an attempt to capture the Clarence S. Campbell Bowl and not the Stanley Cup.

This series has so much to offer, from the team’s ability to play electrifying hockey to creating off the ice storylines, that the only thing every hockey fan can agree on is that we hope this series goes to seven.