We might refer to the the day in which free agents can sign contracts with any team in the league as “NHL Independence Day” since this event bears many similarities to America’s celebration of nationhood. Themes of war, resistance, and liberty prevail in both remembrances of the American Revolution and the World Hockey Association’s fight for free agency.

It would be wrong to suggest that the WHA redefined relations between the NHL and its players for ideological reasons. In reality, pragmatism not idealism fueled the WHA’s struggle to grant more rights to professional hockey players. This fight was a means to an end: ensuring the WHA’s survival. 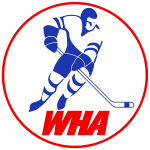 The World Hockey Association (1972-79) was the NHL’s first major competitor in nearly 50 years–dating back to the disbanding of the Western Hockey League in 1926.

By making free agency one of its governing principles, the WHA posed a serious threat to the NHL. Upon its formation, the WHA aroused more curiosity than fear among the NHL’s executives for numerous reasons: The league had outmaneuvered and outlasted other professional hockey organizations over the decades. Moreover, the NHL had extended its sphere of influence to minor and bantam hockey leagues throughout North America. By helping to finance and train prospects, the league primed the next generation of professional hockey players for service in the NHL. The league also had the stars of the day locked up in adamantine contracts. Based on these conditions, it seemed futile for a new organization to challenge the NHL’s supremacy in professional hockey.

History of the “Reserve Clause”

The key to that gave the league exclusive access to players was the “reserve clause” included in each NHL contract. Up until the 1970s, NHL players had to deal with a serf-like existence because the reserve clause dictated the course of their careers. Prior to joining the NHL, a player would sign a contract for a specific amount of money over a certain number of years. There’s nothing shocking about the terms of entry; it’s the terms of renewing a deal that differ from today’s practices. When the contract expired, the reserve clause prevented the player from signing with another team. Instead, the original team retained the player’s exclusive negotiating rights. This provision gave that team immense leverage over the terms of the next deal.

At no time did a player become a free agent, nor could he sign an offer sheet. If other teams wanted to acquire a player after his contract expired, they would have to trade for him as though he were still under contract. A team’s rights over its assets perpetuated from contract to contract until the player retired.  While the reserve clause allowed teams to keep players at the same salary, not all managers used it to underpay stars like Dickensian misers such as Ebenezer Scrooge. Still, a player who didn’t like the number of years or financial compensation offered by his team had few options. Holding out was the main way that a player could try to pressure his team to enhance the offer.

However, the reserve clause also hampered attempts to hold out. The clause was originally developed in the early years of professional baseball in order to keep the salaries of players low. Knowing that players would cause bidding wars if they were permitted to negotiate with other teams when their contracts expired, Major League Baseball executives agreed to implement the reserve clause in order to keep the players’ salaries low. The success of the clause resulted in the NBA and the NHL later adopting it. By keeping salaries artificially low, the NHL made the prospect of holding out (without salary) in the hope of getting a better contract undesirable to players.

The WHA challenged the authority of the reserve clause in order to be competitive as an alternative professional hockey organization. The association’s founders (Dennis Murphy, Gary Davidson, and Bill Hunter) knew that they needed established talent in order to shore up each shaky franchise. To do so, they decided to attract NHL players with large salaries and a radical commitment to players’ rights. On October 20, 1971, the WHA publicly announced that it would neither implement nor recognize the reserve clause as part of its hockey operations.

This announcement was tantamount to a declaration of war against the NHL. The WHA would not honour the NHL’s reserve clause, which meant that its teams would negotiate deals with any player whose contract had expired. The association’s teams wouldn’t have to wait long for the league’s contracts to expire as most were only two years in length. The NHL favoured short contracts because (under the reserve clause) the number of years was arbitrary since the team retained each player’s rights. The WHA’s refusal to acknowledge the reserve clause meant that it would raid NHL rosters each year as more players became (in its eyes) free agents. The league’s complacency with  the reserve clause’s efficacy had backfired, leaving key assets exposed to the allure of the longer and more lucrative deals that the WHA offered.

At first, the NHL pressured teams to let players defect to the WHA for more money and longer terms, but the unwillingness to give up talent eventually led league members to offer more competitive deals in order to keep key players.

The WHA didn’t wage a war of conquest or attrition against the NHL. Rather, it attacked the league by raiding and pillaging its teams and prospect systems. The WHA went after roster players, and it also diverged talent from the prospect pipeline that had made the NHL flush with young talent for decades. To the NHL, the WHA’s probably seemed reminiscent of the causes behind the War of 1812: the United States declared war on Britain in retaliation for members of the British military who disregarded US sovereignty when they kidnapped American citizens and forced them to serve in the British Navy. Of course, the WHA did not actually abduct athletes or force them to play, but managers of NHL teams nevertheless had the feeling that their personnel had been wrongfully taken from them.

To us, however, the WHA probably seems like a more benevolent version of the villain from The Lion King. Scar rallied the hyenas to support his coup by promising that they would never starve again if they followed him. The WHA similarly enticed players such as Bobby Hull to leave their NHL teams by promising that they would receive better financial compensation and more control over their careers. In this way, the renegade league presented itself as an appealing alternative to penurious and tyrannical NHL.

However, just as The Lion King’s hyenas found themselves again starving, many of the WHA’s promises fell through: paychecks were often late or couldn’t be cashed due to insufficient funds. Like pucks during a playoff game in a warm climate, many franchises bounced around North America looking for a stable market only to relocate again when the new location failed to pan out. Furthermore, players’ contracts were often jeopardized when teams simply folded.

Among the least successful teams were the Calgary Broncos, Dayton Arrows, Miami Screaming Eagles (logo above), and San Francisco Sharks. None of these teams would play a single game before being relocated.

The WHA Slays the Reserve Clause

Regardless of the association’s notorious insolvency, the right to free agency became both the WHA’s most appealing promise and its most enduring legacy. It was also the most contentious issue between the WHA and NHL as the latter felt that the former was infringing on its rights by signing away its players. Disagreement over the legality of the reserve clause caused players such as Bobby Hull to be prevented from playing until the matter was resolved. A formal resolution was never made, but a court in Philadelphia did grant an injunction that denied NHL teams from using the reserve clause to keep players from joining the WHA. That injunction was enacted following an antitrust lawsuit filed by John McKenzie (a former Boston Bruin playing for the WHA’s Philadelphia Blazers) that questioned the clause’s legality. The case never came to trial because the NHL did not try to lift the injunction: the court had dissuaded the league from attempting to do so by informing its executives that the contested clause wouldn’t likely be deemed legal. 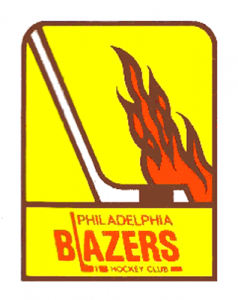 Given this lawsuit, it’s tempting to assume that the Philadelphia Blazers’ logo depicts John McKenzie torching his NHL contract–reserve clause and all!

Based on my research, it does not seem merely coincidental that the WHA had a member playing in Philadelphia file the lawsuit. Although the WHA’s hockey operations seemed chaotic, its administration often developed strategies to optimize its public image. In order to be taken seriously, the WHA aggressively sought marquee players such as Bobby Hull and Gordie Howe. For the most part, the WHA sought to avoid direct competition with the NHL by setting up teams away from the league’s markets; exceptions included areas with the most media concentration such as New York and Los Angeles. The WHA particularly targeted areas in Canada that the NHL had overlooked in its previous expansions (Surgent 2). By doing so, the association probably hoped to capitalize on Canada’s enthusiasm for the game as well as feelings that Canadian cities had been taken for granted by the NHL.

Based on this methodical approach to conducting business, it seems probable that the WHA pushed to have an antitrust lawsuit filed against the NHL in Philadelphia in order to capitalize on optics. What better place is there to fight for the players’ freedom than an American city that, as the site where the Declaration of Independence was signed, is synonymous with liberty?

While the WHA essentially surrendered when it discontinued operations and arranged for select franchises to be absorbed into the NHL, it’s legacy is still very much alive in the way business is conducted in professional hockey. Since the WHA was conceived in order to conflict with the NHL, it only seems appropriate that its most enduring legacy is also one that causes the greatest infighting among the league’s teams during July, and between the league and its players whenever they have to negotiate a new Collective Bargaining Agreement.

The NHL defeated the WHA, but the manner in which these two organizations battled became institutionalized in the victor’s CBA. While the NHL no longer has any North American rivals with which to contend, it’s still fighting with the after-effects from the last serious challenge to its dominance. The war is over, but it has begotten an unending series of battles.

NOTE: Many of the facts used in this post can be found in Scott Surgent’s The Complete Historical and Statistical Reference to the World Hockey Association, 1972-1979 (Xaler Press, 2010).