Mistakes Cost Habs the Game But Not Their Confidence 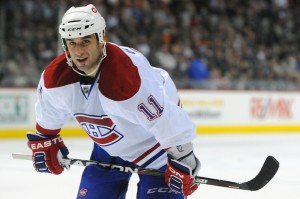 The Montreal Canadiens dropped their first game of the post-season on Monday night against the Boston Bruins, but it wasn’t as disheartening a loss as one would think.

Although the Habs coughed up a 3-0 lead to the higher ranked Bruins, they put in a spirited fight and, unlike Boston who struggled to get back into the game when trailing at home, the Canadiens stormed back to make it a contest.

The Bruins won the first period thanks to a couple Habs mistakes and the desire to gain the lead, something they had yet to do in this series.

Their first goal of the game came off the stick of David Krejci, courtesy of a timely feed from Patrice Bergeron that caught Carey Price out of position. (Interestingly enough, in my opinion, the Krejci goal was the only legit goal the Bruins scored all game.)

Also, keeping pace with how this series has played out thus far, the opening goal came only 3:11 after the puck was dropped.

That said, Boston deserves credit for piling on the pressure after their opening tally.

They knew they were on death’s door and if they didn’t throw everything they had at Montreal this game, they likely wouldn’t have much more hockey left to play this season.

Their persistence, ironically mirroring how Montreal played in Boston during the opening frame of Games 1 & 2, paid off as Nathan Horton added to the lead only 11 minutes later. Horton’s first career playoff tally was nothing to write home about as he bounced the puck off the back of an out-of-position Carey Price, having it barely cross the line as Jaroslav Spacek, only a fraction of a second too late, narrowly missed preventing the puck from crossing the line.

Nonetheless, a goal is a goal, and in the playoffs it doesn’t matter how it gets across the line, only that it does.

In winning their first period of the series, the Bruins had the Canadiens on their heels and, much in the way many Boston fans felt luck was against their side in the opening two games, Montreal fans must have felt the same as they watched Carey Price fire the puck off Mark Recchi and right onto Rich Peverley’s stick, only moments into the second period, giving the Bruins winger a freebie and his team a three goal lead. It was definitely a momentary lapse on Price’s part, yet with the puck going directly to Peverley, you got the sense that the bounces were going the Bruins way.

Establishing a 3-0 lead only 2:02 into the second period, it appeared Montreal was falling prey to a reinvigorated Bruins team, but that is where Boston’s power seemed to fade.

Regardless of the explanation, Boston began to succumb to massive pressure on behalf of the Canadiens and, over the course of the next 38 minutes, played desperate defensive hockey, barely escaping with the win.

The Habs outshot the Bruins in the final two frames, 27-16, equaling the Bruins in goals scored in both periods(although Boston’s fourth goal was an empty-netter), and were coming on at a ferocious pace, only to have time run out before they could complete the comeback.

At the end of Game 3, the Canadiens still held the edge in the series and, although the Bruins are back in it with their win, there should be no reason for concern in the Montreal dressing room.

The Habs played their worst period of the series to open Game 3 and forced themselves to play catch up for the rest of the game. A mistake they can ill afford to make again.

Indeed, they did come close to catching the Bruins last night, but the point was their early lapses cost them the game, yet not at the cost of being out-played.

To say the home team has been at a disadvantage thus far is a rather obvious fact, yet what lies behind that is, although the Bruins coughed up the lead in the first two games, they were nowhere near as competitive or voracious in attempting to regain it as Montreal was. The Habs, on the other hand, demonstrated a keen sense of desperation once they got back into the game. They fell short of the comeback, but the momentum gained in the final two frames of Game 3 is a positive and something that should worry the Bruins.

Yes, Boston is back in this series, but is their confidence?

Thomas & co. looked more relieved than energized by their victory on Monday night and you can’t help but wonder if they weren’t subdued by the fact that they barely got away with it?

A push back was expected of the Bruins, but it wasn’t as intimidating as they hoped.

History has shown that, in the 17 times the Montreal Canadiens have held a 2-0 series lead over the Boston Bruins, they’ve succeeded in winning the series 100% of the time(all 17 times).

There’s also the fact that, prior to Game 3 on Monday, the Bruins had won only 15 Game 3’s over the Canadiens in 31 tries. Worse than that, Boston’s only won the series seven times(out of 31 series) after winning Game 3.

The rich history between these two is only a mental edge if one side lets the other believe so.

With home-ice advantage meaning little this time around, I guess it’s safe to say that history’s influence is just as minimal.

What is clear though, is that the Montreal Canadiens have only lost one period of the nine played so far against the Bruins and hold a 2-1 series lead which is all they need to focus on heading into Game 4.