On November 15, Calgary Flames winger Johnny Gaudreau left a game against the Minnesota Wild after a slash on the hands. The following day, the Flames dropped a bombshell: the slash broke a finger, and Gaudreau would be out for around six weeks. For a club that has struggled with consistency and offensive production this season, Gaudreau’s extended absence could be considered a death knell for their playoff hopes. However, Gaudreau’s injury may be the best thing that could have happened to the Flames this season.

Let’s get this out of the way: Gaudreau is easily Calgary’s most dangerous and dynamic offensive player. For lack of a better term, he’s an artist with the puck that can create something from almost nothing and turn a game on its head with a couple shifts of inventiveness and creativity. Aside from perhaps Kent Nilsson in his prime, the Flames have never had a pure offensive talent on their roster of his magnitude. However, Gaudreau’s offensive creativity comes with difficulties.

For one, Gaudreau’s line has been given a bit of lee-way in terms of diverging from the team’s system – a concession made by many teams for their top guns. But on some occasions, such concessions given to the top line have led to systemic breakdowns, ones that challenge the Flames’ ability to play solid 200-foot hockey.

Gaudreau’s absence and Sean Monahan’s early season struggles, so far, have led to the Flames falling back on their system rather than opening up their play to generate more offense. The Flames’ play in their own end, in particular, vastly improved over the first several games after Gaudreau’s injury.

The club played their entire training camp and exhibition schedule without Gaudreau and seemed prepared for the long haul without him prior to his contract extension. Presumably, his injury had the coaching staff dusting off their training camp binders to implement those early plans.

Their Only Offensive Player?

Gaudreau’s primacy as the Flames’ top offensive catalyst also creates a secondary problem when he’s in the line-up; much like the previous era, when teammates relied on Jarome Iginla to score goals at crucial times, that burden has fallen on Gaudreau. That reliance has reduced the remainder of the Flames line-up to a bunch of players waiting for Gaudreau to do something to win them the game, rather than playing a true team style of hockey. 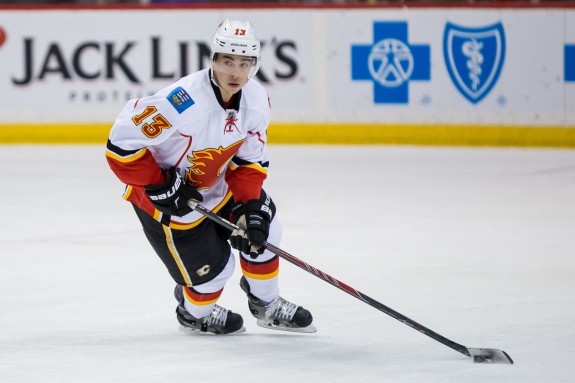 Without Gaudreau in the line-up means that the Flames are forced to find offense from unexpected parts of their roster. So far, the primary beneficiaries of the additional offensive zone time caused by the Gaudreau injury have been the trio of Matthew Tkachuk, Michael Frolik and Mikael Backlund. Originally thought of as pillars of a strong third line, Frolik and Backlund have generated many scoring chances since the addition of Tkachuk to their left flank. With more and more offensive zone face-offs likely ahead, this trio could establish themselves as a true scoring line.

Finally, Gaudreau came out of the blocks rather slowly this season and only generated 11 points in 17 games before his injury – a far cry from his roughly point-per-game pace from the rest of his NHL tenure. The drop in productivity can be attributed to many factors, including a lack of familiarity with new coach Glen Gulutzan’s system and likely a lack of comfortability within the Flames’ line-up.

Jumping into the fray with just one practice before the regular season got underway – compared with teammates that had practiced and worked together for several weeks – Gaudreau never quite looked like he was feeling comfortable or confident, aside from a few offensive flurries here and there. Fans and onlookers waited for the inevitable Gaudreau breakout game. And waited. And waited. By the time Gaudreau was placed on the injured reserve, he had put together a few decent efforts but nothing approaching the level he displayed last season or at the World Cup of Hockey.

The injury comes at the near perfect time for Gaudreau as a player. At the beginning of his rookie season, he seemed to be lost on the ice. Then-coach Bob Hartley scratched him for a game and instructed him to simply watch and see things from a different perspective. From that point onwards, Gaudreau was nearly unstoppable on the ice.

The most recent stretch of play has seen Gaudreau fight the puck to a level he hasn’t done since that initial rough patch as a rookie. An absence from the line-up and an opportunity to step away from the game day routine and just watch the games from a new perspective could re-energize his on-ice performance upon his return. His rookie scratching allowed him the awareness of where the open space was on the ice (and let him know where his teammates had a tendency to play), and on his return from this absence we may once again see a player with an almost unnatural ability to know where his teammates are instead of one that’s trying to do everything on his own.

Losing your best player to injury is never an ideal circumstance. But it may have a silver lining for the Flames.