BUFFALO, N.Y. — Claude Giroux had a goal and three assists to lead the Philadelphia Flyers to a 6-2 victory over the Buffalo Sabres on Saturday.

James van Riemsdyk added a goal and an assist as the Flyers opened a five-game road trip with their third win in 10 games.

The Flyers scored six straight goals after the Sabres took a 2-0 lead.

Giroux’s shorthanded goal gave the Flyers a 3-2 lead early in the third period. Simmonds, Weise and Konecny each scored from close range in a span of less than three minutes to put the game out of reach for Buffalo. 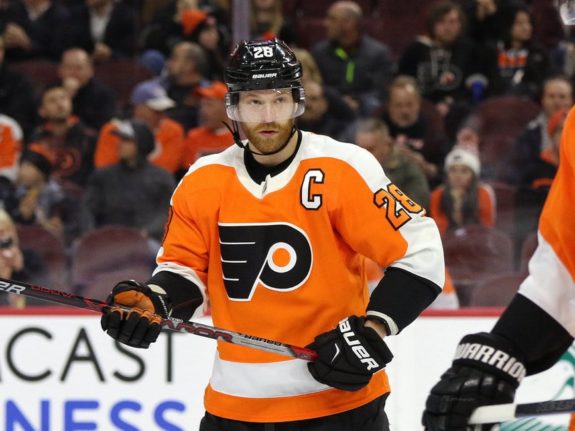 Provorov scored the tying goal midway through the second period. Scott Laughton dug the puck out of the corner to set up the scoring chance.

Eichel, who scored twice in the third period of Buffalo’s 4-3 overtime loss to Toronto on Tuesday, scored both his goals in the first period against the Flyers.

The Sabres’ captain banked a rising shot off the far post for the first goal 4:04 into the game. Eichel then deflected Lawrence Pilut’s shot from the point to give the Sabres a 2-0 lead with a little under eight minutes remaining in the period.

Sam Rinehart had an assist on Eichel’s first goal, extending his career-best point streak to six games. Pilut’s assist was the first NHL point in four games for the rookie defenceman.

The Flyers got on the board 50 seconds later when Giroux won a faceoff and set up van Riemdsdyk’s quick wrist shot from the high slot.

NOTES: Flyers C Sean Couturier sat out with a lower-body injury and is day to day. Couturier, who missed part of the preseason with a knee injury, is leading the Flyers in ice time (21:32 per game). . Couturier’s injury shuffled the Flyers’ top line. Giroux moved to centre and van Riemsdyk jumped up from the second unit. . Sabres G Carter Hutton is day to day with an upper-body injury. Buffalo called up Scott Wedgewood from the minors to back up Ullmark. . Sabres D Matt Tennyson made his season debut after being called up on Friday. . Sabres RW Jason Pominville returned after missing two games with an upper-body injury. . Sabres RW Kyle Okposo played in his 700th NHL game.