LOS ANGELES — Derek Forbort had a goal and an assist, Jonathan Quick made 29 saves and the Los Angeles Kings defeated the Vegas Golden Knights 5-1 on Saturday.

It was only the sixth time in 30 games that Los Angeles has scored four or more goals. The Kings tied their season high from a 5-2 victory over Edmonton on Nov. 25. The Kings, who have two wins in their last five games, have a league-low 23 points and with 65 goals are last in the league in scoring.

Marc-Andre Fleury stopped 20 shots for the Golden Knights, who had won seven of their last eight.

The game was tied at 1 after the first period when the Kings took control with a pair of goals in the second. Luff scored a power-play goal on a one-timer from Brendan Leipsic with less than eight minutes to go. Four minutes later, Carter was credited with his sixth goal of the season on a shot he played off the boards that bounced off the right skate of Vegas defenceman Nate Schmidt and went into the net. 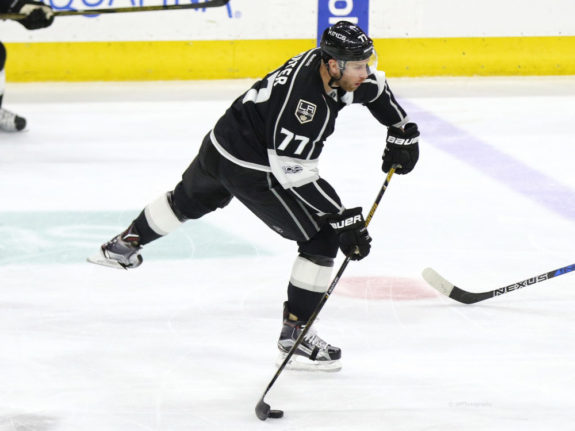 Forbort and Thompson added goals in the third.

Lindberg opened the scoring four minutes into the game when he took a pass from Tomas Nosek in front of the net and slipped it through Quick’s legs. Scherbak evened it four minutes later on a snap shot from just beyond the right faceoff circle. Scherbak — who scored on his fourth shift with the team — was claimed on waivers from Montreal on Sunday, but his debut was delayed due to work visa problems.

It was the first time in five games that the Kings scored on the power play. They came into the game with the third-worst power play in the league, while the Golden Knights were second in penalty killing.

NOTES: Los Angeles LW Kyle Clifford took a hit to the head from Vegas C Pierre-Edouard Bellemare during the second period and did not return. Clifford came into the game with two goals in the past three games. … This was the first of four meetings between Los Angeles and Vegas through Jan. 1.

Kings: Begin a four-game road trip on Monday at Detroit.