It was the first time all season that the Wilkes-Barre/Scranton Penguins let a third period lead slip away when they hosted  division rival, the Syracuse Crunch, in their first week day game of the season.  The game was back and forth and needed a shootout to decide the winner where the Crunch later took home the 4-3 victory with two shooters scoring in the shootout.

It’s hard to be too disappointed coming out of a hard fought game against a division rival with only a point.  The Pens pulled ahead of Norfolk and into first place in the East Division.

Center Andrew Ebbett, scored two for the Pens.  After splitting time with Vancouver of the NHL and Chicago of the AHL last season, it is no surprise the veteran has been fairly consistent throughout the first month of the season.  In 11 games played this season, Ebbett has 11 points and 26 shots on goal. 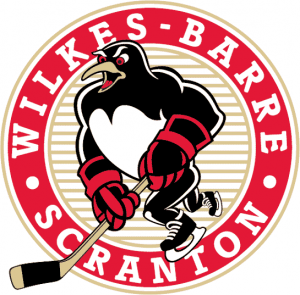 Yes, the Pens got a point in game, but they also gave up a point to division rival Crunch that might hurt them as the season progresses.

The Penguins had a chance to win the game during overtime when Harry Zolnierczyk was giving a penalty shot only 37 seconds in.  Zolnierczyk did not convert and the game eventually was determined in a shootout.

Forward Dominick Uher left the game towards the end of regulation.  He was helped off the ice and was not putting pressure on his left skate.  There is no word on his condition, but hopefully he will not be out long.  The second year forward is only one point away from matching his point total from last season where he played in 53 games.  Uher’s grit and willingness to drop the gloves when needed adds a spark to the Pens third line.

The Penguins finish off their home stand on Friday when the Albany Devils come to town.  Puck drops at 7:05.  The Devils are in 4th place in the Northeast Division where they are 5-5-1.