In December of 1999, Hockey’s Future noted that Henrik Zetterberg was a young prospect with “tremendous balance and agility” but that his size was the primary concern. They noted that he played a comparable game to then-Red Wing Slava Kozlov but sat behind Frederik Modin and the Sedin twins in terms of top Swedish prospects. Fast forward 15 years and you can hardly believe that there was a time where Frederik Modin was the standard that Zetterberg was being compared to. The next question to ask is, has Zetterberg been great enough to merit consideration for the Hockey Hall of Fame?

Comparison of Zetterberg to Draft Mates

Earlier in the month, THW’s Dan Rice wrote a piece questioning whether or not San Jose Sharks’ forward Joe Thornton deserved to be in the Hall of Fame. Rice’s piece caused me to think about the players of this generation and whether or not Zetterberg stacks up. I decided to compare Zetterberg to his teammate Pavel Datsyuk and the Sedin twins, who were drafted well ahead of him and considered to be better players at the time of the 1999 entry draft. In terms of points per game, Zetterberg matches up very well. This chart created using  SportingCharts pictographically represents each player’s points per game for each season of their career. Zetterberg is the blue line with circles. 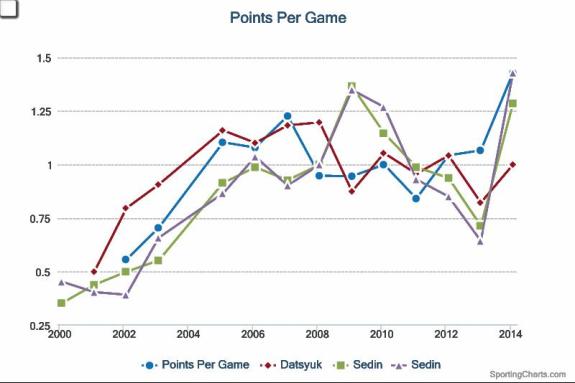 You can see that aside from 2008-2011 when the Sedin twins peaked, Zetterberg’s been in line with the Sedin twins and Datsyuk for the most part of his career. This is important to demonstrate because like it or not, players cannot get into the Hall of Fame based on intangibles alone. They have to be able to score with the best of their generation and this graph shows that. You can point out that I didn’t include Joe Thornton, Sidney Crosby, Alex Ovechkin, or Steven Stamkos, but i was trying to only include players drafted right around the time of Zetterberg when looking at the points per game for each season to evaluate how quickly they developed and how long they sustained success. Now that I’ve demonstrated that he can actually put up points at the same level as his peers, I want to take a deeper look into the numbers. Thanks to advanced statistics, we can look at how Zetterberg accumulated those points. We can see his quality of competition, the percentage of shot attempts that were in his favor, and how often he started his shifts in the offensive zone. To make it even better, I included Crosby, Ovechkin, and Evgeni Malkin in this comparison.

Comparison of Zetterberg to Generational Talents

This next image was created using War-On-Ice’s player comparison tool. The NHL began to track shot attempts starting in 2005, so this table compares a few different things. Along the X-axis is the 5-on-5 Corsi For%. On the Y-axis is 5-on-5 Corsi Competition%, or essentially quality of competition. The color of the circle reflects the Corsi Teammate%, or the quality of teammates that each player played with. Finally, the size of the circle indicates the percentage of shifts started in the offensive zone. The bigger the circle, the more shifts that player started in the offensive zone during 5-on-5 situations. 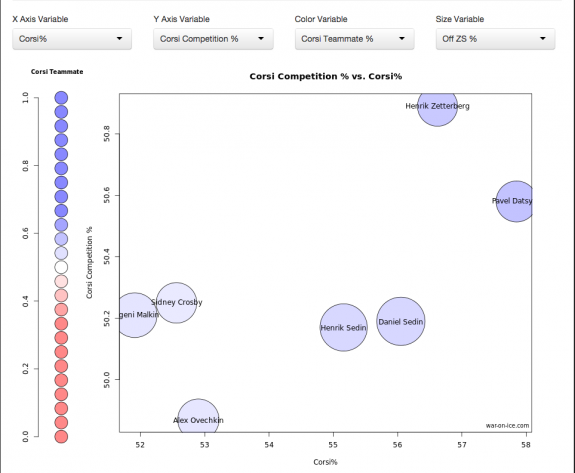 From this graph we can see a variety of things. In this comparison, Zetterberg recorded the second highest Corsi For%, but he plays against the highest quality of competition in terms of opponents’ Corsi For%. The color of the circle for Datsyuk and Zetterberg are a bit darker than the other players, indicating that they played with higher quality teammates. Finally, the size of Zetterberg’s circle appears to be one of the smallest, indicating that a fewer percentage of his shifts start in the offensive zone. What’s the big takeaway from this graph? When Zetterberg is on the ice, he starts more of his shifts outside of the offensive zone, plays with higher quality teammates, plays against a higher quality of competition, and the team generates the 2nd highest percentage of shot attempts at the opposing net. That is extremely impressive, especially when you consider the fact that the best players of his generation are on this graph.

The Path to the Hall of Fame

To put this simply, Zetterberg has without a doubt been one of the best players of the last decade. The numbers don’t lie, the advanced stats don’t lie, and the Stanley Cup ring is extremely impressive. When you throw in the intangibles, it’s hard to imagine that he doesn’t get in. However, he will have to continue to produce at a consistent rate for the next four or five years. If Zetterberg can get to 1000 career points (he’s 270 away), I think he’s a slam dunk. Since 1999, only five forwards have been induced to the Hockey Hall of Fame with less than 1000 career points (Clark Gillies, Cam Neely, Dick Duff, Igor Larionov, Pavel Bure, Peter Forsberg). However, Zetterberg doesn’t match Forsberg’s points per game (0.95 vs. Gillies’ 1.25), Bure’s or Neely’s goal scoring prowess (0.37 goals/game vs. Bure’s 0.63 vs. Neely’s 0.54), Larionov’s international impact, or Gillies’ Stanley Cup rings (4 to 1 in favor of Gillies) . So Zetterberg will have to continue scoring in order to get to that crucial 1000 point mark. I hate that the 1000-point mark is so important to the Hall of Fame, but this is the world we live in. Of the 79 players who scored 1000+ points in their career, 56 are in the Hall of Fame.

Right now Zetterberg is 34 years old with 730 points and 766 career games under his belt. He’s under contract for six more years so let’s assume he finishes out his contract. If you then assume he plays 60 games a season for those six seasons to account for injuries, and assume he plays 63 more this season, you are looking at a total of 423 career games remaining in Zetterberg’s career. Thus far, Zetterberg is scoring at an absurd 1.43 points per game, a mark that would shatter his career best. Unfortunately I just don’t see him keeping this up so let’s assume he regresses to the 2nd best points per game mark of his career – 1.1 points/game. Using the 1.1 points/game, that gives Zetterberg 77 points in 70 games this season. That puts him at 797 points in 829 games. That leaves Zetterberg with the need for 203 points in 360 projected games, a 0.56 points/game scoring rate. Is that feasible? Over the last six seasons of Steve Yzerman’s career, he scored 272 points in 336 games (0.81 points/game). From age 35 to age 40, Igor Larionov scored 324 points in 425 games (0.76 points/game). Both Yzerman and Larionov played and thought the game similar to Zetterberg so I picked those two as comparisons. Granted, Yzerman and Larionov were on fantastic teams at that stage of their career, so it remains to be seen if Zetterberg will be able to produce at that level. Regardless, I think Zetterberg can easily hit the 1000 point mark and given his leadership as captain of the Red Wings, his Stanley Cup ring, and his favorable comparison to the greatest players of his generation, I can’t imagine him not being a first ballot Hall of Famer.

1 thought on “Henrik the Great – Does Zetterberg Belong in the Hall of Fame?”