First, women’s hockey is a relatively young sport and has only had an NCAA championship since the 2000-01 season.

Historically, the WCHA has been the dominant conference in women’s college hockey winning 12-of-13 National titles. Last season, Clarkson University became the first eastern school to win an NCAA title.

The University of Minnesota-Duluth won the first ever NCAA title and has won the most Women’s NCAA Division I College Hockey championships with five. Minnesota and Wisconsin have won four titles each.

That being said, it’s incorrect to say that there isn’t hitting or checking in women’s college hockey. In fact, it’s re-occurring misconception about women’s hockey. Again, while it’s illegal to hit an opposition player in the open ice, body contact “is” allowed along the boards. It’s not uncommon to see an opposing player rub out the puck carrier next to the boards.

This past weekend, I attended the women’s WCHA Final Face-off there was a lot of body contact and hitting. Especially in the offensive zone on the side wall. 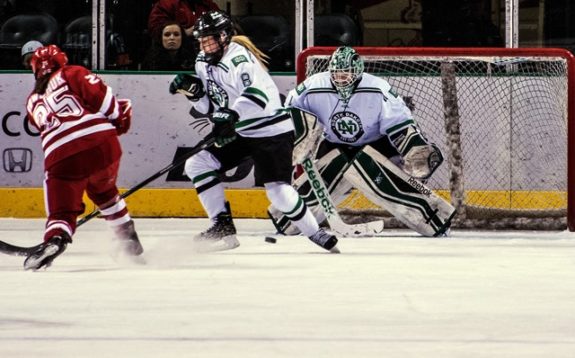 Per the Patty Kazmeir Award site

Patty Kazmaier represented the spirit, character and on- and off-ice excellence upon which The USA Hockey Foundation national women’s ice hockey award is based. A gifted scholar-athlete, Patty battled a rare blood disease for more than a year before passing away in 1990 at the age of 28. A loving mother and wife, she left behind her husband, Mark J. Sandt and an infant daughter, Serena.

Athletic excellence ran in the Kazmaier family, as her sister, Kathy, played college ice hockey at the University of New Hampshire and her father, Dick Kazmaier, a graduate of Princeton University, won the Heisman Trophy in 1951, beating out Pro Football Hall of Famer Frank Gifford.

Since the award was established, there has been only one repeat winner, Jennifer Botterill of Harvard University (2002, 2004).

The NCAA tourney first round games are hosted by the higher seeds. The following week, the winners advance to the Frozen Four at a host site.

Finally, these are just a few of the differences in women’s division I college hockey.