Last night Brooks Orpik laid a big hit on Jonathan Toews that forced the Hawks captain to leave the game. Had it not been a star player, no one would have cared. [Pensburgh]

NBC’s Mike Milbury wasn’t a fan of the hit. He hates the Penguins, so no surprise there. [Puck Daddy] 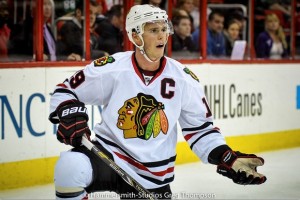 What happened to the Toronto Maple Leafs? [Globe and Mail]

Flames rookie Sean Monahan scored his 20th goal of the season in a loss to the Senators. He’s tied with Jarome Iginla and Dion Phaneuf for the franchise record in rookie scoring. [Canada.com]

Should Carolina have drafted Monahan instead? [Cardiac Cane]

Colorado’s Matt Duchene is expected to miss about a month with a knee injury. [9 News]

Thomas Vanek is fitting in very nicely with the Montreal Canadiens. [A Winning Habit]

And finally, someone has stolen the Stanley Cup! [YouTube]