After yet another failed season in Pittsburgh, there has been some talk that the Penguins should finally consider trading Evgeni Malkin, [Sportsnet], but not to shake things up. Rather, to free cap space and build around Sidney Crosby. Trading a player of Malkin’s caliber makes me nervous, because no matter what you get in return, it won’t be of equal value. But, I also decided to look at the big picture. The Penguins can’t win with their current set-up. Now I know what you’re going to say, and that’s the excuse of injuries. But even with their full compliment of players, can anyone actually say the Penguins were a better team than the Rangers?

And, further to that point, save for this season and 2011, the Penguins have always been healthy in the playoffs, and yet continually fall short. Six years to be exact, since their Stanley Cup win in 2009. In an effort to chase a championship every season, the team has traded a ton of draft picks, leaving them with little to no forward depth in the system. Combine that with former GM Ray Shero’s propensity to draft defencemen and the Pens have painted themselves into a corner. They need good, young, cheap players on entry-level contracts to fill out the roster.

For a team up against the Cap as the Penguins are, they can’t afford to bring in big veteran contracts. At least not good ones. And they have nothing left to trade. All due respect to Kasperi Kapanen and Oskar Sundqvist, but what really can be expected of these guys? Sundqvist will likely be a third-line center at best, and while there’s a lot of hope for Kapenen being a top-six winger, his development is still ongoing. And as Crosby continues to get older, how long can they wait?

The Penguins won’t be better in the short-term by trading Malkin, unless an elite winger comes back in return. But even then, it’s a tough trade to make. The Penguins shortsightedness and awful decision making have brought them to this point. They likely won’t move Malkin, but all it will mean is yet another disappointing season in Pittsburgh and another year of Crosby’s prime out the window.

A questionable hit allowed the Capitals to score the game winning goal. If you’re not cheating, you’re not trying, eh Backstrom? [Blueshirt Banter], [NJ.com] and [Deadspin]

So, those Anaheim Ducks are pretty good. [Calgary Herald]

And a bad night for the Flames got worse with some significant injuries. [NHL]

Apparently Mike Babcock would like to coach the Oilers. Probably nothing to do with that Connor McDavid guy. [Edmonton Journal] 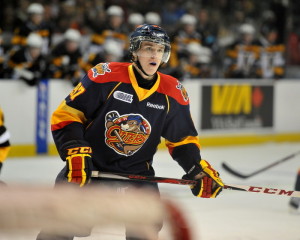 The NHL has released it’s nominees for the Masterton Trophy. [Puck Daddy]

What does the future hold for Kevin Bieksa in Vancouver? [Canucks Army]

If Dylan Strome is still on the board, the Leafs have got to take him right? [The Leafs Nation]

Will Canada end their Gold drought at the World Championships? [Fan Rag Sports]

And finally, shouldn’t blame the coach for the Penguins troubles. [Today’s Slap Shot]