Christopher Ralph is a senior sportswriter here at THW specializing in covering NHL prospects and the entry draft.

Either I have forgotten or somehow the news eluded me when announced back in February, but Hockey Canada legend (a term which is probably used too loosely in the sports world, but not in this case) Paul Henderson was then diagnosed with CLL (Chronic Lymphocytic Leukemia).

“In Canada, they wait for significant pain before starting chemotherapy,” he says. “It could be one year, two years, even three years. 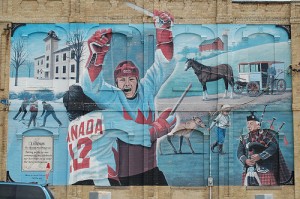 “I’m looking for alternative treatments, which are more prevalent in Europe.”

According to Henderson, the disease is in Stage Four. It is in his stomach. His chest. His blood. His lymph nodes. Eventually it will cause his body to decay. But not his spirit, he vows. Never his spirit.

“I have a loving wife, kids, grandkids. I feel great. I work out five times a week. I can walk 36 holes of golf — at least I could in the fall.

“I always said I would live life to the fullest until the day I died. I just didn’t expect to die this soon,” he says with a laugh.

Today (September 28th) marks the 38th anniversary of his historic and dramatic series clinching goal in the ’72 Summit Series, and it was great to hear Mike Richards in the Morning (Fan960.com) interview him today.

Whereas younger hockey fans might recall more vividly the brilliant Gretzky to Lemieux ’87 Canada Cup goal or even Jarome Iginla to Sidney Crosby’s Vancouver 2010 Gold Medal game winning goal, Henderson’s goal remains and forever will be one of the all time great moments in Canadian sporting history.

Henderson updated listeners openly when prompted that his disease is still at the watch and wait stage. He has amazingly positive attitude and vows to himself that he will never have a bad day.

CLL is actually the most common form of leukemia found in adults in Western countries. The term “chronic” in chronic lymphocytic leukemia comes from the fact that it typically progresses more slowly than other types of leukemia. The “lymphocytic” in chronic lymphocytic leukemia comes from the cells affected by the disease — a group of white blood cells called lymphocytes, which help your body fight infection. (Apologies for the medical infusion of information, but I also work as a clinical pharmacist in a Pain Clinic at a cancer centre.)

His hockey jersey came in the news earlier this summer. As the Montreal Gazzette reports:

The Toronto businessman who paid $1.2 million earlier this year for the No. 19 jersey Paul Henderson wore during the 1972 Canada-Soviet hockey series has followed through on his promise to share the “iconic” object with Canadians through a nationwide tour.

On Tuesday — the 38th anniversary of Henderson’s unforgettable series-winning goal in the final minute of the landmark Cold War clash — SmartCentres’ CEO Mitch Goldhar announced the launch of a contest to determine the first stop on the jersey’s cross-Canada odyssey, to begin in January 2011.

Canadians are being invited to make a pitch for why their community should be first to exhibit the sweater and a collection other hockey memorabilia. The artifacts are to be trucked across Canada in a specially outfitted trailer for what’s being billed as “The Henderson Jersey Homecoming Tour.”

“This is everybody’s sweater,” Goldhar said at the time in an interview with Postmedia News. “I feel like 33 million people own this sweater, and I just happened to buy it.”

Where were, if you were in fact even conceived at the time of occurrence, when:

3 thoughts on “Hockey — Not Cancer — On Henderson’s Mind: Anniversary Of THE Goal”